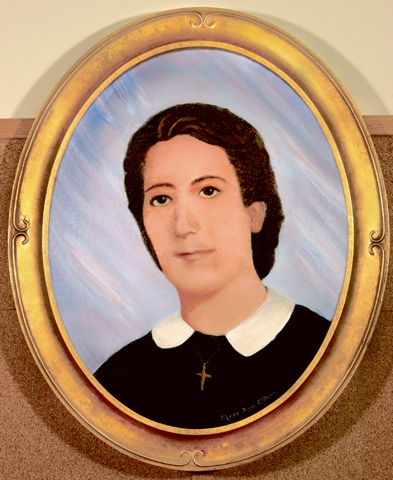 Every year, my friend and CSJ sister Juanita Shealey has a special celebration of Black History Month at our Cleveland motherhouse. Lovely African-American artifacts are prominently displayed and on Sunday, about 200 people will come to learn about black history. ("It's all of our history," Juanita emphasizes.) Our gathering area will be filled with the music, oratory and poetry of African-American culture and heritage.

When I ask Juanita how she came to join our then-all-white community over 60 years ago, she replies simply, "I came because of love, to serve the Lord. I knew from age 9 that I wanted to be a nun." When I ask what it was that made her stay, she gives a one-word reply: "God."

Juanita's simplicity in naming God as the source of her persevering love resonates powerfully with that of another woman of color, Sr. Henriette Delille, who lived and ministered more than 150 years ago. Before it was legal for such a community to exist, Henriette founded the Sisters of the Holy Family, a religious community of African-American women in New Orleans.

Thanks to Juanita's inspiration, I celebrate Black History Month with you this year by retelling the remarkable story of a woman known as "the servant of the slaves." Henriette's life bears witness to the paradoxical ways the Spirit blesses our faith and then, through our agency, turns unjust social structures upside down.

Born in 1812, Henriette Delille was the youngest child of a French father, Jean Baptiste Delille, and a free woman of color, Josephine Diaz. She was raised within the unique social conventions of colonial Louisiana. White women were scarce, and even though the law forbade biracial marriages, interracial relationships were quite common and sanctioned by society. "Quadroon balls" presented beautiful mixed-race women such as Henriette to white men among the New Orleans gentry in search of life partners or mistresses. The offspring of these liaisons were not considered bastards. They freely used their father's name, were educated and had some rights of inheritance. In New Orleans in particular, a highly cultured society developed among "free people of color" whose freedom was nevertheless fettered by the ever-present Jim Crow laws.

Being a beautiful light-skinned woman of color in quadroon society meant Henriette was expected to better her family's social standing by matching up with a wealthy white man either as a mistress or a life partner. Like most young quadroons of her generation, she was well educated and learned the "womanly arts" of makeup, jewelry ornamentation, and the selection and care of elaborate wardrobes.

At age 11, Henriette came under the tutelage of a French nun, Sr. St. Marthe Fontier, who taught young women of color in the daytime while at night instructing black adults, both slave and free, in the faith. Though slaves were not normally educated, the French church insisted they be taught the rudiments of the faith and baptized. Henriette proved an avid learner. By age 16, she was deeply absorbed in visiting the sick, feeding the indigent, and teaching the poor and enslaved. She soon encountered the stark realities of working with slaves. Because laws regulated the extent to which bonded and free could intermingle, Henriette learned very early how to walk the delicate political tightrope that continually plagued her and her sisters as they sought to serve people in bondage.

More and more, Henriette was drawn toward her compassionate work among slaves and away from quadroon society. A defining moment came when her family registered as white in the 1830 census. Creoles often crossed the color line to gain freedom from restrictive laws. Henriette refused to follow them, choosing instead to continue her work at the school and her public association with slaves. She found a new "family" in lifelong friends and co-workers Juliette Gaudin and Josephine Charles, who also resisted quadroon social expectations. They would eventually become co-founders of the Sisters of the Holy Family.

In 1835, Henriette gained access to her inheritance. She sold her property and, together with a zealous French woman, Marie-Jean Aliquot, as well as Juliette, Josephine and several other free women of color, attempted to found a religious community called the Sisters of the Presentation. This community was short-lived. Aliquot was white, and an 1830 law forbade interracial associations, which meant white and black sisters could not live together under one roof.

Nevertheless, Henriette was determined to find a way. A prayer she wrote on the flyleaf of a devotional book anchored her life: "I believe in God. I hope in God. I love [God]. I want to live and die in God."

Finally, in 1842, the dedicated group was formally recognized as a religious association and began to wear a plain blue dress as their religious garb. Racist opinions about the social status of black women were such that they would wait almost 40 years, until after the Civil War, before being allowed to wear a religious habit.

In 1881, the Sisters of the Holy Family bought the Orleans Theater, the former site of the quadroon balls Henriette, Juliette and Josephine had so vigorously rejected. The theater was remodeled into a school and convent and the ballroom transformed into the sisters' chapel. This remarkable turnaround led Professor Onita Estes Hicks of the State University of New York to write:

Recruiting her early followers from among the quadroons slated for concubinage, Henriette made a bold frontal attack on the sexual prerogatives and privileges of white male society, transforming their sassy sirens into sacred sisters. Against palpable historical odds, Henriette founded and nurtured her religious foundation.

Today, the Sisters of the Holy Family continue their dedicated ministry of education and service to vulnerable populations. In 2010, the Vatican declared Henriette Delille venerable, two steps away from canonization. While the Catholic community awaits two new miracles to secure her saintly status, perhaps the most important one has already been given.

To learn more about Sr. Henriette Delille and the Sisters of the Holy Family, visit sistersoftheholyfamily.com.