Why wasn’t a woman invited to preside at a papal prayer service? 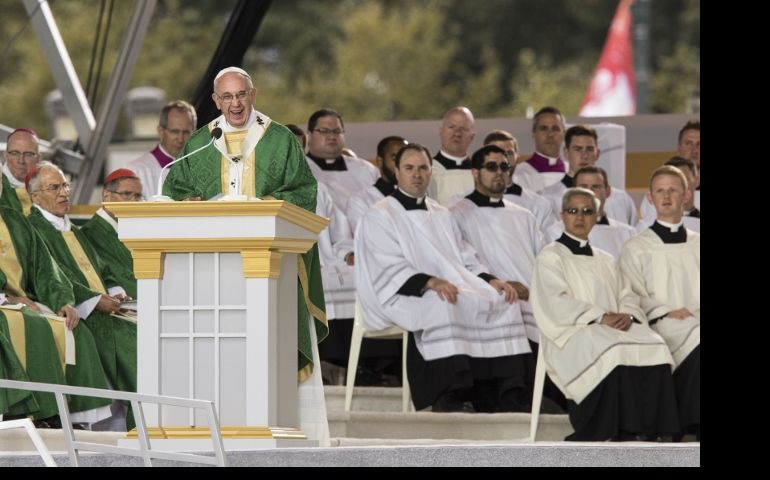 All men: Pope Francis delivers his homily during the closing Mass of the World Meeting of Families on Benjamin Franklin Parkway in Philadelphia Sept. 27. (CNS photo/Lisa Johnston, St. Louis Review)
This article appears in the Francis in the United States feature series. View the full series.

Pope Francis' visit left me with a welter of conflicting feelings.

I am proud of U.S. Catholicism and awed by the monumental organizing of dedicated church women and men in Philadelphia, Washington, D.C., and New York City. They skillfully orchestrated Francis' much-desired engagement with the poor as well as the politically powerful.

I was inspired by our humble, Spirit-filled pope, who prodded both Congress and clerics to serve the common good rather than petty partisan interests.

I prayed along with the people of God for a new spirit of respect for the environment and of welcome for struggling immigrant peoples.

And I bemoaned the glaringly persistent visuals of a Catholic liturgy woefully lacking gender balance.

Our common prayer needs to mirror the whole church, not just those gifted with a Y chromosome.

Papal Masses in all three cities countered Francis' "I am one of you" narrative by evoking male hierarchical triumphalism.

In our U.S. church, female ministers and lay leaders probably outnumber priests by at least 10 to one. Who teaches in parish schools of religion? Who ministers to the sick and aging? Who organizes Bible and theological reflection for adults? Who organizes and teaches parish RCIA (Rite of Christian Initiation for Adults) programs? Who trains the parish choir, selects appropriate hymns and provides musical accompaniment to each and every parish Mass?

Most times it is women, who constitute 80 percent of all lay ecclesial ministers in the U.S. c.

Lay ecclesial ministers are the all-but-invisible glue holding our parishes together.

Yet at every papal liturgy, the sanctuaries were filled to bursting with men wearing black cassocks, red or purple sashes, heads topped with matching beanies. In the Philadelphia cathedral, priests were seated in front while laity and women religious were relegated to the back of the church. Thankfully, this was not repeated in other venues.

Would it have been too much to include a few female altar servers and communion ministers?

To their credit, liturgy planners appointed female cantors in all venues except St. Patrick's in New York. Liturgists made an admirable effort to select both male and female readers, and both men and women recited the prayers of the faithful in diverse languages.

At Philadelphia's closing Mass, the woman cantor wore liturgical garb (an alb) and prayerfully guided congregational singing. She was the solo woman minister amidst a sea of cardinals. Her reverence was inspiring.

But since four of the eight papal prayer venues were not Masses, would it have killed us to have a female presider at one or two prayer services? This is permitted under current liturgical guidelines. Female lay ecclesial ministers preside at prayer services in parishes all the time.

Why couldn't a woman (gasp!) have preached at a papal prayer service? This is also permitted under current guidelines.

Most embarrassing was the multi-faith service at Ground Zero. Here, Sikhs, Muslims, Hindus, and Buddhists included both men and women prayer leaders. Only the Judeo-Christian traditions did not. This is surprising since there are many female rabbis and Protestant ministers. For Catholics, again, this was not a Mass. A Catholic woman minister could and should have been invited to  help lead prayer.

I was consoled by the beautiful rendition of "Let There Be Peace on Earth" by a mixed choir of boys and girls at the interreligious service. The girls wore multicolored stoles but not the boys. Was this a silent witness? Rather than the usual "With God as our Father, brothers all are we," the choir sang an inclusive: "With God our Creator, family all are we." A small comfort, but I take it where I can find it.

I also wondered why Catholics women leaders didn't join all the men-in-black welcoming Pope Francis as he deplaned in three cities. Did anyone think to invite women like Dominican Sr. Donna Markham, head of Catholic Charities, USA, who just a week earlier had launched the #End45 campaign to eradicate poverty for about 45 million U.S. poor people?

Is it time for our bishops to put aside an antiquated boys-only mentality as well as the political partisanship the pope challenged in our Congress?

While our pastoral and politically savvy pope gave much deserved shout outs to U.S. sisters, the lay women who are doing the bulk of parish work received just one mention, albeit a heartfelt one. Francis said it was time the church valued "the immense contribution" of lay and religious women and pointed to the need to reinvigorate faith. "This will require creativity in adapting to changed situations . . . and being open to the possibilities which the spirit opens to us," he said.

Newsflash to U.S. bishops: It's time to get creative and publicly include women ministers in all liturgical leadership to the extent current guidelines allow.

And while you're at it, petition Pope Francis to open the permanent diaconate to women.

These are just some of the new possibilities the Spirit is opening to us.

It's time for our bishops to stop paying lip service to how important women are in the church.

It's time for them to act.

Program for the multi-religious gathering at Ground Zero museum:

Parish | Why wasn’t a woman invited to preside at a papal prayer service?

Your thoughts on the title of the upcoming enycylical, 'Fratelli tutti'

Magdala celebrations heal long-buried misogyny -- but will our daughters care?