Will next synod address ordaining 'elders' -- both women and men? 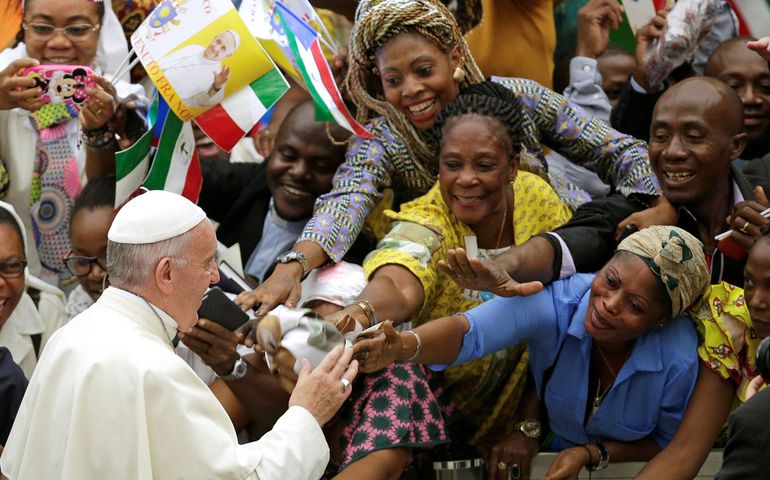 Pope Francis greets the faithful as he arrives to lead his general audience in Paul VI hall at the Vatican Aug. 10. (CNS photo/Max Rossi, Reuters)

Anytime Austen Ivereigh offers an opinion about an issue in the Catholic church, I pay attention. His outstanding biography of Pope Francis, The Great Reformer, opened my eyes to what makes Francis tick. It also provided a fascinating window into why the pope's lived experience has given him a unique ability to negotiate delicate political issues and get stuff done.

What makes Francis tick is his passion about the pastoral care of people.

So when Crux recently published an article by Ivereigh headlined "Next synod likely to focus on ordaining married men," I took notice. Not only because this is a founding issue of FutureChurch, the church renewal organization I served for more than 20 years, but because I know how important it is to honor all the ministries in the church, not just those of male priests.

I was dismayed by the title Crux gave to Ivereigh's piece because it sensationalized what he actually wrote. What he said is that burning "questions about ministry: access to the sacraments, the role of women and lay people, as well as the role of deacons" are leading some to say that pastoral ministries will be the topic for the next Synod of Bishops.

Yes, it is true that Ivereigh repeated Francis' well-publicized openness to ordaining married men after his April 2014 private audience with Brazil's Bishop Erwin Kräutler. At the time, Kräutler spoke about ordaining viri probati (proven men) from local communities to serve local communities, an idea that had been discussed at the 2005 international synod on the Eucharist.

Kräutler and the pope also compared notes about the priest shortage in Latin America and, according to Ivereigh, Francis alluded to some "interesting hypotheses" that had been proposed by retired Bishop Fritz Lobinger of Aliwal, South Africa. Francis then encouraged Kräutler to work with the national bishops' conference to send "bold, concrete proposals" to Rome.

As it turns out, Lobinger's "interesting hypotheses" involve more than ordaining married men. In an intriguing 2010 U.S. Catholic article, he writes:

More than half the Catholic Church's communities [worldwide] have no resident priest. ...  A great number of these 'self-ministering' communities are ready or almost ready for the introduction of teams of ordained elders. ... Because the majority of proven local leaders are women, it is unavoidable that the question of their inclusion among ordained elders will arise, though present church law does not permit it.

Lobinger is proposing two forms of priesthood, citing the example of the early church (Acts 14:23) when Paul and Barnabas appointed local "elders" (presbyters) for churches in Asia Minor. "Both receive the same sacrament of Holy Orders," suggests Lobinger, but would exercise different roles:

At issue, of course, is the crying need for the Eucharist and other Catholic sacraments. Lobinger relates that although "Mass is something rare" in the South African community of Mmusong, "there is no Sunday when the community feels lost. It has several teams of trained leaders who ... conduct a lively and meaningful Sunday service. The people hear a well-prepared sermon every week."

Lobinger's creativity in seeking ways to serve the pastoral needs of people has caught on in Brazil where, Ivereigh reports, theologian Antonio José de Almeida is advising a high-ranking Brazilian church commission reflecting on these questions.

In February 2015, de Almeida republished a 2013 book he had written about the subject under a new title: Nuevos ministerios: Vocación, carisma y servicio en la comunidad. In it, he singles out not only the 400 married male deacons in Chiapas, Mexico, as signs of new "elder"/"presbyteral" vocations, but also the 40,000 delegados de la palabra (delegates of the word) in Honduras, many of whom are female.

So I was fascinated to read about the proposal Kräutler and Cardinal Cláudio Hummes sent, at the pope's suggestion, to the Brazilian bishops' conference in November 2014. They reportedly spoke of ordaining "married community elders" -- not "proven men." At the time, religious media interpreted this more inclusive term as referring only to married men, but I'm not so sure.

For one thing, how would ordaining only men as "community elders" be received by the thousands of priestless communities now being led by women?

It could be that these Latin American churchmen simply used a more "politically correct" term to avoid ill feelings from the many women who animate and lead base communities.

Could this account for Francis' apparent haste to establish a commission on women deacons? If there is a movement to return to "ordination" models used by the early church to ordain married men, there is little justification for excluding women who were ordained under those same models.

And if "pastoral ministries" are indeed the topic of the next Synod of Bishops, women's ministerial equality should be high on the agenda, right alongside access to the Eucharist.

Maybe we finally will discuss the graced, gender-balanced ministry so desperately needed by the people of God.

Parish | Will next synod address ordaining 'elders' -- both women and men?