Will we build the common good or destroy the bonds that unite us? 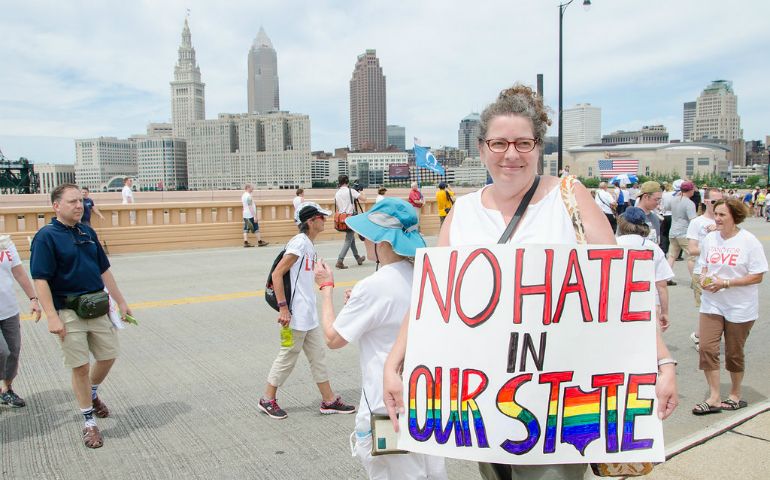 "Interpret everything in its most favorable light." My adherence to this centuries-old maxim of the Sisters of St. Joseph is being severely tested right now.

Well, Donald Trump's family does seem to like him quite a bit.

I'm sorry, but that's about as positive as I can be about the circus of negative energy that engulfed Cleveland's Quicken Loans Arena during last week's Republican National Convention (RNC).

Chris Christie stoked hatred for Hillary Clinton with his call-and-response "lock her up" chant echoed by an arena filled with delegates who apparently checked their brains at the door. Trump advisor Al Baldasaro is now the subject of a Secret Service investigation after twice saying Secretary Clinton should be put "put in front of a firing line and shot for treason." And then there's Dr. Ben Carson's strange speech linking Clinton to Lucifer. Excuse me?

And we Clevelanders naively thought all the nastiness would happen outside the arena.

So yes, I guess you could say last week's RNC show was severely lacking in family values.

By the time you read this, Democrats dealing with their own convention issues will overshadow the Republican event. (I'll give the Dems equal time soon.) But I cannot let go of the Cleveland experience without lamenting the deterioration of civility in public discourse so disgracefully on display last week.

In the past, the Catholic Legion of Decency would have rated this nationally televised event as "objectionable," or even "condemned." In today's parlance it amounts to something like: "This program contains graphic material that could be dangerous if tried at home. Viewer discretion is advised."

We seem to have forgotten the purpose of politics as described by Pope Francis in his address to U.S. Congress last September:

You are called to defend and preserve the dignity of your fellow citizens in the tireless and demanding pursuit of the common good, for this is the chief aim of all politics.

The chief aim of politics is the common good? Not one privileged group lording power over another? Now that's different.

And must we really defend and preserve the dignity of our fellow citizens -- even citizens from an opposing political party?

The answer, it appears, is yes.

It is yes because we are all part of the human family. When healthy families disagree, they try to resolve differences in ways that value the common good of familial unity and care. This is why most of us would never employ last week's nasty rhetoric at home. We instinctively know that to do so risks permanently damaging important relationships. We also lose the possibility of creating a "win-win" solution that works for everyone.

On July 1, the Leadership Conference of Women Religious published a fine statement about why civil discourse, respect, and common decency are essential to the functioning of a healthy democracy. I quote it here in part:

Those on both sides of the growing political divide too often appeal to our basest instincts and stoke the fires of fear that threaten to tear the fabric of our nation apart. We cannot let the voices of hatred and fear carry the day ... . The problem is not our many disagreements. It is how those conflicts are handled that spells the difference between building the common good and destroying the bonds that bind this nation together.

I wish we could see that we have nothing to lose by treating our fellow citizens as members of our own families. Why stoke another's ire with needlessly demeaning speech? This not only stops the conversation, it greatly decreases another's willingness to be open to our point of view.

There were some silver linings in the convention cloud that hovered over Cleveland last week.

Our Circle the City with Love event attracted about 3,000 people who spanned the Hope Memorial Bridge the day before the convention opened. We joined hands in silent meditation for 30 minutes (in 89-degree heat!) hoping to kickstart the week with a peaceful vibe. I like to believe we set the tone for the largely peaceful demonstrations that followed.

Then there is Cleveland's awesome police chief, Calvin Williams, who jettisoned his desk job and joined his officers on the streets. Chief Williams had his own bicycle and showed up everywhere. He prayed with protestors, hugged and respected them, and modeled how to gently but firmly separate those seeking to escalate the situation. There were only 23 arrests, most for "failure to disperse," despite there being many thousands of demonstrators. Credit must go to the peacefulness of protestors as well as wise policing.

Last but far from least, my hugely Democratic city treated our Republican visitors with unfailing courtesy, warmth, and respect.

Now I just wish that could happen everywhere.

The future of our families, indeed of our democracy, may well depend upon it.

Will we build the common good or destroy the bonds that unite us?