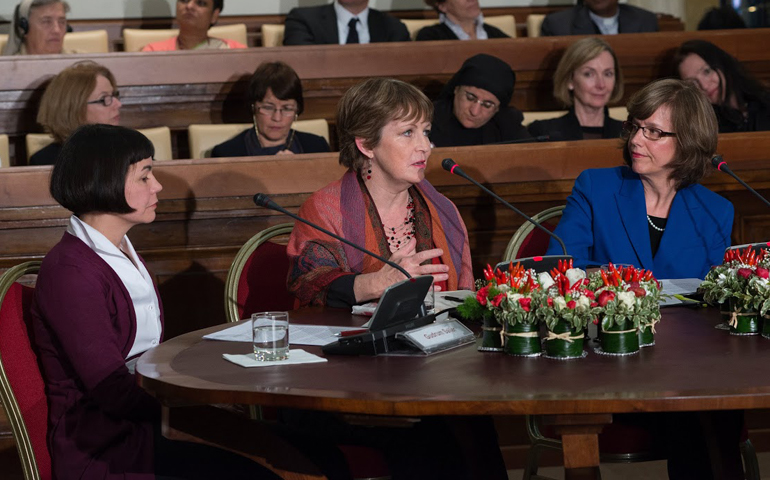 From left: Gudrun Sailer, Tina Beattie and Deborah Rose-Milavec speak at the Voices of Faith event March 8 at the Vatican. (VoF/Alessandra Zucconi)

OK, I'm gobsmacked, as the Brits say ("gobsmacked": adjective, British, informal: utterly astonished; astounded). I spent four hours on International Women's Day watching a Voices of Faith event "from the heart of the Vatican" in which women shared stories "for a creative exchange of ideas from a female perspective." There were some amazing narratives.

Mary McFarland, a former dean at Gonzaga University, spoke eloquently about her work bringing online education to girls in camps run by the Jesuit Refugee Services. Students from one beleaguered camp had just one remaining evening class to fulfill graduation requirements. Amid increasing threats of violence, their teacher doubted anyone would risk coming. Yet every single student showed up. "The hunger for education and the girls' great resilience is stronger than war," McFarland told us.

Sr. Hatune Dogan, a Syrian Orthodox Christian, lives out of her suitcase because she travels continually to Syria and Iraq, helping abused women who have fled from the Islamic State group. (To our amusement and edification, she agreed to display the contents of her bag: one computer, one LCD projector, one habit, pajamas, a toothbrush, and two copies of her books.)

These were just two of many inspiring stories of women's courageous and creative efforts to counter the poverty and degradation that are "the consequences of violating the fundamental rights of a girl child, especially the right to education," said Nigerian Jesuit Fr. Agbonkhianmeghe Orobator. A year ago, Orobator publicly called on Nigeria's president to resign after his government failed to address the kidnapping of 200 schoolgirls by the terrorist organization Boko Haram.

Noting that in sub-Saharan Africa, a girl's subjugation is linked to cultural prejudice, religious fanaticism, and sectarian hatred, Orobator lamented: "Any society that relegates women to secondary status creates conditions for a morally depraved ideology. Educating a girl is a threat to such ideologies and renders an educated girl an endangered species." He called for strong, bold voices: "Voices of women are needed in the world's religions to challenge the patriarchal hermeneutic and lead to a better understanding of the sacred texts."

Yes, "gobsmacked" is not too strong of a word. Just across the room sat female theologians who are respectfully challenging patriarchal interpretations of sacred texts that render women second-class status in our own tradition.

It is difficult to write about this in the context of the suffering of the Boko Haram, Iraqi and Syrian women. I do not wish to imply that the suffering of women within the Catholic Christian tradition equates to their suffering. Yet the potential for abuse remains whenever a girl child internalizes that she is somehow less worthy and beloved of God than her brother because she never sees herself reflected in sacred texts or serving in sacred roles. (I try not to think too much about what her brother is internalizing.)

A Catholic event celebrating passionate women working for female empowerment would lack integrity if it did not also address women's empowerment in the church. Caritas International, Jesuit Refugee Services and the Fidel Götz Foundation are to be congratulated for their wisdom and courage in adding this long-awaited discussion to their program.

In light of Pope Francis' repeated calls for a "more incisive presence" of women in the church, four women -- a theologian, a medical doctor, a former ambassador, and a journalist at Vatican Radio -- reflected on their experiences and their dreams for Catholicism. Dubbed "We have a dream," the panel was astutely facilitated by my colleague, friend and FutureChurch director, Deborah Rose-Milavec. Highlights of panel reflections have been ably covered elsewhere by NCR and others, so I will focus on aspects that struck me as most helpful for "do-ability" in advancing dialogue in the church today.

Canon law and the laity

Veteran Vatican Radio journalist Gudrun Sailer cited German Bishop Reinhard Marx, who "recently said we need to look at canon law and see which roles require ordination and which do not. Right now, there are only two undersecretaries who are women. We should have 10 to 20 undersecretaries in the next couple of years."

Preaching, seminary education and the lectionary

"I dream of a church where a woman can give a homily like the one Kerry gave this morning," said medical doctor and theologian Astrid Lobo Gajiwala. "Women professors who teach homiletics to seminarians should be permitted to preach themselves." (Delhi, India, Archbishop Anil Couto had earlier asked Kerry Robinson of the National Leadership Roundtable to share a reflection at the concelebrated Mass that kicked off the day.)

We also need "more stress on women in the lectionary so we can see ourselves in our sacred texts," said Gajiwala, who is one of the architects of a gender policy passed by the Indian bishops' conference in 2010. (Spoiler alert: I will cover this in depth in a future column.)

Former Swedish ambassador to the Vatican Ulla Gudmunson said she "lost count of the number of times I heard women described stereotypically as tender, patient and mothering" -- language with which she does not always identify.

"It is diminishing to men to imply that they don't have a capacity to be tender and patient. Pope Francis himself is a shining example of 'feminine genius,' " she said, eliciting quiet chuckles from the audience. "The Vatican needs to recognize women as individuals who are different people, have different political views and different gifts."

British theologian and professor of Catholic studies Tina Beattie is dismayed because "800 women die every day in childbirth-related events, yet Catholic social teaching says nothing about maternal mortality." She mourns that although Catholicism has done more than any religion to preserve the voices of women, "women must start at ground level in every generation."

No one teaches about women's traditions or the history of women's leadership in the church. "Feminist scholarship has given back to the church gifts from the medieval women mystics that we've forgotten, women who did not learn Latin but did vernacular theologizing," Beattie said. "We are retrieving that history now. Yet feminist theologians have yet to be recognized in church documents."

The Voices of Faith event this year was a tour de force. It was balanced, constructive, compassionate and impassioned.

If Pope Francis really wants a "more incisive presence," the dreams of women who clearly love the church would be a great place to start.