Abortion before the Supreme Court: Four decades and still no consensus 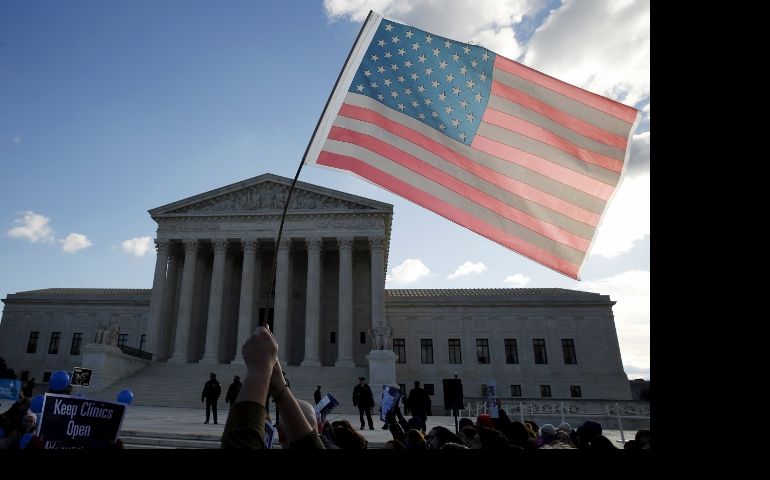 A person holds up the American flag in front of the U.S. Supreme Court in Washington March 2, the day that the court heard oral arguments in a challenge to a Texas law imposing new standards on abortion clinics and requiring abortion doctors to have hospital admitting privileges.. (CNS photo/Kevin Lamarque, Reuters)

As we witnessed the recent arguments in the Texas abortion case in front of a now-eight-member U.S. Supreme Court, I kept going back to what I once heard former Missouri Sen. John Danforth say about the 1973 Roe v. Wade case.

Danforth -- today among that nearly extinct breed of moderate Republicans -- said it would have been better for the nation all around if citizens could have come closer to some consensus about this searing issue before the court settled (sort of) it. Having a court-mandated decision, he argued, while the nation still was so deeply divided did nothing to heal those divides.

Well, more than four decades of history shows he was right about that. But it's hard to imagine whether and how we ever might have reached something like a consensus had the court in fact not ruled, given that this is one of those issues that, for some, clearly involves what cognitive anthropologist Scott Atran calls "sacred values" -- nonnegotiable commitments that can't be exchanged or changed for any monetary value.

In other words, people who are virulently opposed to abortion for religious reasons seem absolutely unwilling to change their minds for any reason, whether love or money.

So what happens -- and has been happening fairly consistently since 1973 -- is that people like me feel left out of the debate between two conflicting poles. I am essentially against abortion. But I recognize that there are times when it may be the least evil of a series of evil choices, so I, a male who never did or will have to make a decision to have an abortion, want abortion to be, in Bill Clinton's words, legal but rare.

I also believe that the government should not be making intimate personal health care decisions for citizens. The ultimate decision about having a constitutionally protected medical procedure should be up to the individual who wants or believes she needs that procedure.

I naturally consider my own position on abortion to be wise and just and balanced -- and theologically (especially pastorally) defensible. But we are in a time in our culture in which most of the attention on difficult issues gets paid to the loudest voices and thus to the people who can find no room for compromise.

So we are a society that remains harshly divided over abortion.

Perhaps the Supreme Court might have framed its 1973 decision not on the basis of the due process clause of the 14th Amendment but, rather, on the religious liberty clause of the First Amendment. This Atlantic piece explores that possibility, but concludes that although it might have been a better basis on which to rule then, there's almost no room or will for such an argument today.

So here we are stuck in the middle of a long, bitter fight. What is unknown at the moment is whether whoever gets named to be replace the late Justice Antonin Scalia on the Supreme Court will continue to uphold the Roe v. Wade decision or help to overturn it. Which, of course, is another reason that presidential elections matter.

What I do know is that Christians of all varieties should be engaged in this matter in a way that honors the reality that we are not omniscient. Rather, we are flawed human beings who would do well to adopt the Benedictine virtue of humility any time we dispute matters with others.

This does not mean abandoning our principles. But it does mean recognizing that sometimes we adopt flawed principles and it does mean that others may be as sincere in their beliefs about issues as we are about our beliefs.

But even as I write that I recognize that we have entered a period of political Trumpism, when it seems permissible to say anything -- and to say it with bravado and conviction. And it makes me want to weep.

Politics | Abortion before the Supreme Court: Four decades and still no consensus