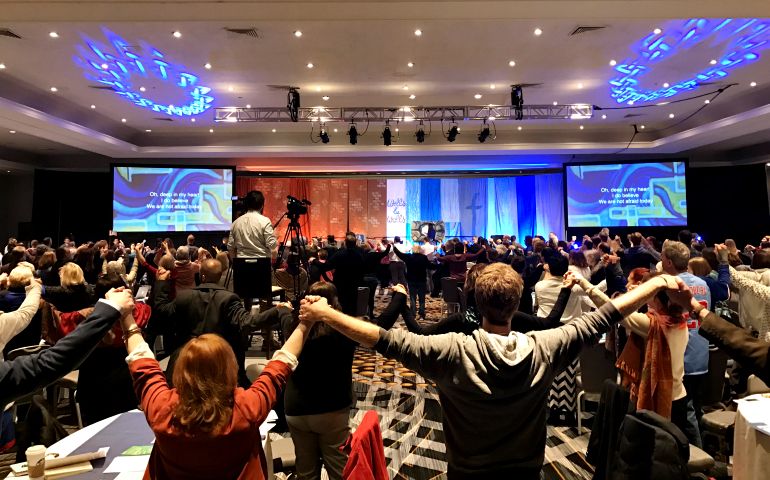 People sing "We Shall Overcome" during the NEXT Church gathering in Kansas City, Missouri, in March. (Jen James)

A movement called NEXT Church, made up of leaders from congregations in the Presbyterian Church (USA), the denomination that includes my church, recently provided a venue for me to say something that even surprised me a little.

Drawing on the book about Pope Francis that my pastor, Paul Rock, wrote with me, we spoke at the national NEXT gathering in Kansas City, Missouri, in March. In the discussion period, what I sort of blurted out may have resonance with all branches of Christianity — especially Catholicism, given its severe shortage of priests.

I suggested rethinking ordination of pastors — and for many reasons beyond scarcity (which is a Presbyterian problem, too). Radically changing our approach to ordination may seem heretical, but stay with me.

I've been ordained as both a deacon and an elder in my church. Both are elective positions, not requiring a seminary education. But the ordination vows I take are exactly the same as those pastors take, with two exceptions, which have to do with administering our two sacraments, baptism and Communion.

I don't want to minimize what pastors learn in seminary, especially the Presbyterian requirement that future pastors learn Greek and Hebrew. One of their primary jobs, after all, is to preach, and that exploration of Scripture requires knowledge of the Bible in its original languages.

But that's about preaching. And from time to time, we Presbyterians allow laypeople, including me, to preach, recognizing that they will bring to the task something other than masterful exegetical competence.

Administering the sacraments, however, is reserved for pastors. The question I raised at the NEXT conference was, essentially, this: Why does it require a seminary degree and ordination to be able to baptize people and to oversee the Eucharist? These are profoundly meaningful sacraments and must not be trivialized by having people lead them who don't understand them in deep ways or who don't take them seriously.

But I have trouble seeing why only ordained clergy are fit to serve in that role in Protestant churches (recognizing that the Catholic understanding of the role of a priest in the Eucharist differs from the Protestant understanding). I also wonder why congregations — or, anyway, small groups of them — can't raise up clergy from within their own number.

That's far from a new idea. A small example: In his book The Dominican Friars in Southern Africa: A Social History (1577-1990), Philippe Denis writes that in the 1820s in Mauritius, Catholic "churchwardens" were elected, "and like Calvinist churchwardens they demanded the right to be consulted on any matter of importance. ... In 1788, John Carroll, the first Catholic bishop in the United States of America, had been elected by his clergy. ... Having seen the priests elect their first bishop, in some places the laity wished to elect their own priests."

This move toward ecclesial democracy didn't thrive in American Catholicism, but it's worth noting that it existed at all.

Even in recent times, there have been movements within Catholicism advocating direct election of bishops, which I mentioned in this 2014 column.

I don't know where a thorough look at the issue of ordination will take the church. What I do know is that ordination can and does sometimes turn into clericalism, in which pastors, priests, imams and rabbis acquire almost unquestioned authority. That's not good for anyone, including the clergy.

This year, in which we are commemorating the 500th anniversary of the Protestant Reformation, may be an excellent time to discern anew where the restless and generative Holy Spirit may be leading us on this and related matters. That's much preferable to circling our ecclesial wagons so that we can protect the way we've nearly always done things.

Wagon-circling, after all, hardly ever works. Besides, it makes us look silly in the long run because eventually we find that we get run over by the wagons that God will drive right through our defenses.

Parish | It may be time to radically rethink ordination