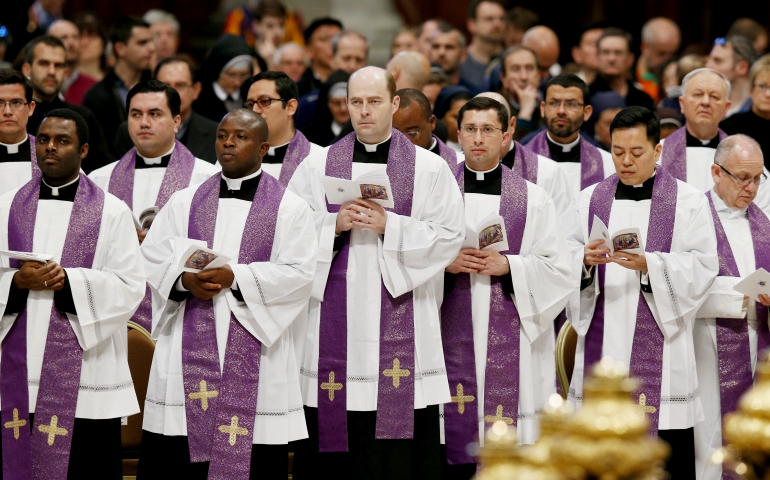 A persistent criticism of the Christian church universal — but especially the Catholic Church — is that in many ways it's patriarchal. Which is to say that men, not women, run it.

Look at any picture of the College of Cardinals gathered with the pope, and male dominance is embarrassingly obvious, given that it's at least theoretically possible to have female cardinals.

A subtle but effective reinforcement of this men's club image happens every time a Catholic priest is addressed as "Father." Oh, I know calling priests that has a long tradition and in some ways it's a charming personalization of the oversight role priests play. But as we celebrate Father's Day this month, maybe it's time for Catholics to reconsider the practice.

Because of the church's celibacy requirement, priests are not allowed to be fathers in the same way that I'm one. Two adult women today are related to me by blood because my sperm and their mother's eggs miraculously combined. I'm also stepfather to four adults with whom I have a fatherly relationship, though we know our connection is spiritual through love, not physical by origin.

(None of these six people calls me "Father," however. I'm "Dad," "Bill" or "Hey, you." And our eight grandchildren apply various names to me, none of them "Grandfather" and none, despite my persistent instructions, "Your Grace.")

So to call a priest "Father" is to use a metaphor that seems in odd tension with church teaching about celibacy. Beyond that, it is a drip-drip-drip reminder that the church forecloses the possibility of ordaining women. By contrast, in the Episcopal Church, which began ordaining women as priests 40 years ago, female priests often are addressed as "Mother," bringing at least a little balance to the continuing reality that the priesthood in that church continues to be dominated by males.

I'm well aware that the Catholic practice of calling priests "Father" is deeply ingrained in church culture and would be difficult to change.

That said, just having a conversation about such a change might prove to be enlightening and even liberating. I bet that here and there one might even find some priests who would be glad to be rid of the title. It might even be possible to find a parish priest who would be bold enough now to ask church members to call him something other than "Father." But what?

In many fields, the title applied to people says something about their duties, as in "General," "Professor" or "Doctor." Such a title is quite available and has been used regularly through much of Christianity: "Pastor." Lutherans and Baptists, especially, often refer to "Pastor Collins" or, more informally, "Pastor Jim." That works.

The title "Reverend" is applied to both Catholic and Protestant pastors, of course, and sometimes Protestants will call their pastors by that title, as in "Reverend Haley, would you please open this meeting with prayer?" So that's an option, but it's sort of stilted, which is why with some pastors the title gets shortened to "Hey, Rev."

But "Pastor" is more, well, pastoral. Each time it's used to address a minister, it reminds him or her of a key assigned task. The congregation is full of people who need pastoral care, whether to help heal broken relationships or overcome grief. It's softer and humbler than "Father," which carries with it the implication that the person to whom it's applied holds authority and should be obeyed. That's one reason Christians traditionally refer to God as "Father."

Well, look, my idea comes to you from a Presbyterian with precious little skin in the Catholic-priest-title game. So, of course, you're free to incinerate it. But I think that calling priests "Father" is one of those rarely challenged practices that should be held up to the light now and then to see if it still serves a useful purpose.

P.S.: I usually call my pastors Paul and Kristin.