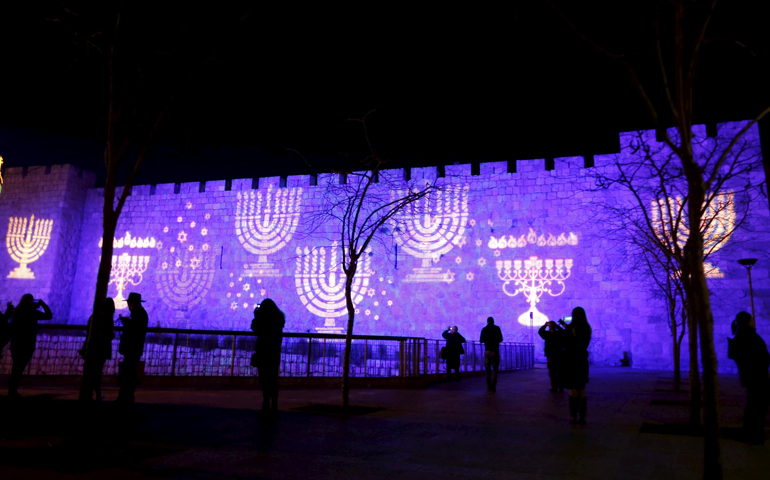 People walk past images of Menorahs projected on a wall surrounding the Old City of Jerusalem Dec. 8. (CNS/Ammar Awad, Reuters)

When my friend and co-author of one of my books Rabbi Jacques Cukierkorn traces his family history back far enough, he finds roots in Spain in 1492.

Most Americans will recognize that as the year "Columbus sailed the ocean blue," as the old grade-school ditty goes. But it also was the very year in which King Ferdinand and Queen Isabella ordered Spain's Jews who had not converted to Christianity to leave.

Jacques' ancestors managed to survive and eventually make it to Poland, where Jews were much more welcome and where some in his family became the first of what would become a long line of Polish rabbis.

I thought again of that painful history when news broke recently of a new Vatican document that says the Catholic church should not try to convert Jews to Christianity but should work with them to overcome antisemitism.

People who suggest the church never changes might want to take a look at Christianity's long, lamentable history of anti-Judaism. One way is to read an essay about that on my daily blog. For most of 2,000 years the church was either trying to convert the Jews or it was treating them as subhuman scum. And sometimes the treatment didn't improve much even for those Jews who did convert.

It took until 1965 and the Vatican II document Nostra Aetate for Catholicism to render the verdict that Jews should not be considered guilty of the very crime the church had accused them of for centuries -- being Christ killers.

So change comes with painful slowness in the church, but at least on some issues it comes, and this new document represents another important step in repenting of the church's past sins against Jews and learning to treat them instead as beloved children of God.

Drawing from the Apostle Paul's letter to the Romans, the document's creators chose to call it "The Gifts and Calling of God Are Irrevocable."

That epistle to the Romans has caused lots of theological consternation over the centuries as Christians have tried to figure out what Paul was saying about Jews then who, unlike him, did not believe that the Messiah had come in the person of Jesus of Nazareth.

I think Pauline scholar Mark D. Nanos has it right when he concludes -- as he did earlier this year in a lecture in Germany -- that Paul "continued to practice Judaism, and moreover, he continued to promote it" even after his Damascus Road experience.

As many scholars -- including Nanos -- have argued for decades, Christians and Jews often have simply gotten Paul wrong, imagining that he created Christianity and converted to it in his lifetime. This anachronistic misinterpretation has led to some Christians using Paul as a warrant for anti-Judaism by attributing to him a false and harsh critique of the religious tradition of which he was a part for his whole life. In the process, it also has meant that many Jews have come to view Paul as something of a traitor.

These are just a few of the issues that have arisen to complicate Jewish-Christian relations, which, nonetheless, have been on a definite upward trend since publication of Nostra Aetate.

Now this new document has put the church squarely in the camp of those who believe what the document says: "From the Christian confession that there can be only one path to salvation, however, it does not in any way follow that the Jews are excluded from God's salvation because they do not believe in Jesus Christ as the Messiah of Israel and the Son of God."

As I read the new document, it doesn't forbid individual Catholics from testifying to Jews about Jesus. But my exposure to Judaism tells me that many Jews are much less interested in what Christians call personal salvation and much more interested in repairing this current world. That's good because it needs lots of fixing.