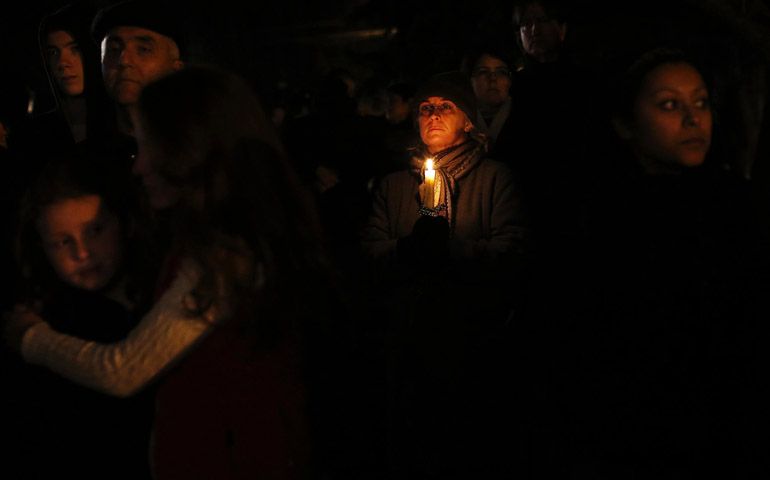 People take part in a Dec. 14, 2012, vigil outside St. Rose of Lima Church in Newtown, Conn., after the shootings at Sandy Hook Elementary School. A gunman opened fire on children and staff at the school, killing at least 27 people, including 20 children. (CNS/Reuters/Shannon Stapleton)

Each of us inevitably must think about the causes of evil and suffering.

The various answers to the question of why there's evil in the world if God is good and powerful are called theodicies, but the reality that all theodicies fail is the open wound of religion. We simply have no one-size-fits-all exhaustive answer to the problem of evil that satisfies everyone.

That doesn't keep us from wrestling with the question, however. I personally struggled with it in light of the murder of my nephew, a passenger on the first plane to strike the World Trade Center in the 9/11 terrorist attacks.

And Mindy Corporon continues to grapple with the question of evil after both her teenage son and her father were killed on Palm Sunday in 2014. A neo-Nazi white supremacist has been charged with those killings at the Jewish Community Center Campus in suburban Kansas City as well as with the death of a third victim, a woman, at a nearby Jewish retirement center. All three victims, it turns out, were Christian, though the targets were Jews.

I spoke at some length recently with Mindy about how she has processed the issues of theodicy in the last year, and, as I reported on my daily "Faith Matters" blog, I found a thoughtful woman unafraid to ask the hard questions of faith.

Two members of her family, she told me, are "both very angry. They chose anger. Not that anybody shouldn't, but they did, and it's hard for them. It seems to be a lot harder for them to heal. I didn't choose anger."

Instead, Mindy set an inspiring example first by showing up at a prayer vigil at which I spoke the night of the shootings. It was shocking to see her there, but she wanted to thank people for caring, and she wanted them not to blame God for what happened. What happened, she made clear, was that one man chose evil.

Then, to mark the anniversary of the shootings, she and members of the family of the slain woman organized a series of events and a commemorative walk called "Seven Days: Make a Ripple, Change the World." It was Mindy's way of calling attention to the reality that we need not succumb to anger and revenge, even when faced with murderous evil.

The other thing she learned was that anger must be directed to where it can have an effect and be healed. So when Mindy expresses anger about the deaths of her son and father, "I get mad at God." And when she does that, God helps her heal, she told me.

The ability to challenge and express anger at God, to demand answers from God is what the great French Reformed theologian Jacques Ellul in his book Hope in Time of Abandonment called not despair, but evidence of hope. Hope, he writes, "is man's answer to God's silence ... Hope comes alive in the dreary silence of God, in our loneliness before a closed heaven, in our abandonment. God is silent, so it's man who is going to speak."

It's hard to imagine a more evil act than to arm yourself to the teeth and go hunting Jews just because they are Jews. The strange irony that the people killed last year were all Christians doesn't change the level of evil.

And it would be perfectly understandable if, in response, people took revenge in some way and even blamed God for not protecting innocent people.

But Mindy Corporon, a member of a United Methodist congregation, has chosen a better way: the way of peace, the way of community, the way of love.

Devil not yet deleted from official church texts