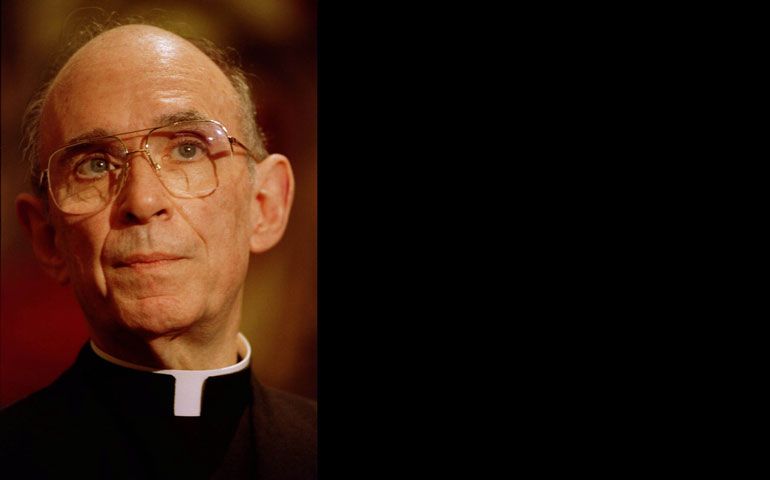 "When the soldiers crucified Jesus, they took his clothes, dividing them into four shares, one for each of them, with Jesus' cloak remaining. This garment was seamless, woven in one piece from top to bottom" (John 19:23).

When Cardinal Joseph Bernardin died of cancer on Nov. 14, 1996, Chicagoans responded like they did when they heard of President Franklin Delano Roosevelt's death. The announcement brought the city of broad shoulders to its knees. The Tribune quoted the cardinal as saying he faced death with peace and that it was a gift from God.

Not only Chicagoans but Catholics everywhere remember Bernardin for teaching us how to die with dignity. Few remember how he taught a whole world to live with dignity through his Catholic vision, the seamless garment of life. Isn't it interesting? The sanctity of life is less memorable than the experience of death.

Bernardin's gift to the world is not a moment in time. It is an eternal teaching to see the world with the eyes of the soul.

The seamless garment of life is a metaphor for the reality that all of us share one life in God. It is not a tenet but an understanding that all of life is sacred, from womb to tomb, in the unborn and the dying, in the murderer on death row and the mother in a coma, in the soldier in Afghanistan and the family in Iraq, in the undernourished child and the pensioner who can't afford a doctor. "When human life is considered 'cheap' or easily expendable in one area," Bernardin said, "eventually nothing is held as sacred and all lives are in jeopardy."

Eileen Egan (1922-2000), a co-founder of the peace organization Pax Christi, coined the phrase seamless garment of life in 1973. A decade later Bernardin turned the metaphor into a consistent ethic of life. It became a cloak of moral issues woven together as seamlessly as Jesus' tunic and was an endeavor to bring unity to Catholic teaching. Bernardin wrote:

If one contends, as we do, that the right of every fetus to be born should be protected by civil law and supported by civil consensus, then our moral, political and economic responsibilities do not stop at the moment of birth. Those who defend the right to life of the weakest among us must be equally visible in support of the quality of life of the powerless among us: the old and the young, the hungry and the homeless, the undocumented immigrant and the unemployed worker. Such a quality of life posture translates into specific political and economic positions on tax policy, employment generation, welfare policy, nutrition and feeding programs, and health care. Consistency means we cannot have it both ways. We cannot urge a compassionate society and vigorous public policy to protect the rights of the unborn and then argue that compassion and significant public programs on behalf of the needy undermine the moral fiber of society or are beyond the proper scope of government responsibility.

Right to life and quality of life complement each other in domestic social policy.

The cardinal wanted to build a bridge between pro-life conservatives and social justice liberals, but many politicians, in government and in church, used the seamless garment principle to support their own agenda. Democrats used it to argue against capital punishment while Republicans used it to reinforce their opposition to abortion. But the teaching turned on a light in the attic of Catholic consciousness. In 1995 Pope John Paul II issued the encyclical Evangelium Vitae, "The Gospel of Life," encouraging "a culture of life" over a "culture of death."

Bernardin had weaved the disparate threads of Catholic morality into a whole cloth. He enabled the church to be more consistent in its statements about abortion, capital punishment, modern warfare, the environment, genetics, and medical care in every stage of life. Sadly, you won't find the seamless garment of life in the official catechism but for the first time in a long time you will encounter fewer "single issue" Catholics and more who think twice -- and three times -- about contemporary moral dilemmas. More have moved away from the far left and far right and instead sit squarely on the middle of the fence, an uncomfortable but honest place to be. More Christians are aware of the unity of life and our responsibility not to rip it apart as the soldiers did Christ's garments, but to keep it whole.

Bernardin died in peace 16 years ago this month. His gift to us is a garment that shakes the confident, gives confidence to the shaken, and fits all sizes. For this we are grateful.

[Michael Leach is editor at large for Orbis Books.]

The Nativity of the Lord

Intimacy, rituals, tears are the gifts and desire this moment brings

My New Year's resolution: Be a little more like the Aleppo Christians