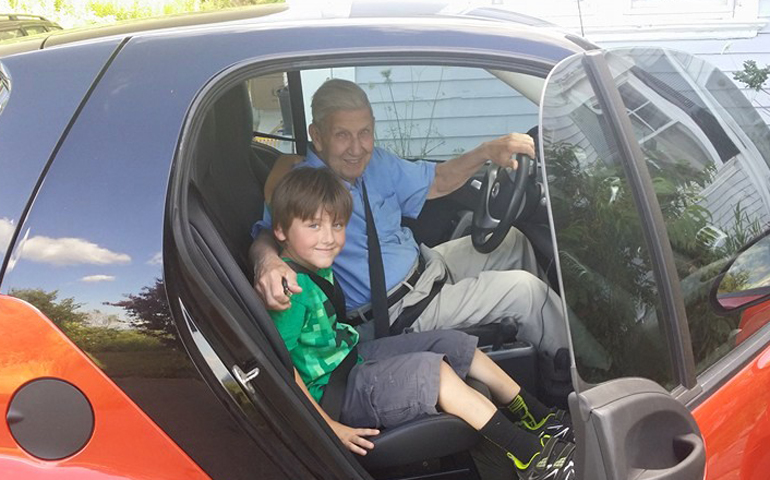 The world needs to understand Jesus' teaching on forgiveness, and when it does, the world will find its way to peace.

All he ever wanted to do was tell people about Jesus. That got Fr. Joseph Girzone in trouble with the church. It also brought him millions of dollars that he gave away like the chocolate bars soldiers handed to children all over Europe during World War II. Joe knew life was a field hospital before Pope Francis said those perfect words, and he wanted to do what Jesus would if he were still on battlefield earth: let everyone know that God forgives.

Joe is with Jesus now. He died on the afternoon of Nov. 29, the first Sunday of Advent, surrounded by 40 family members and friends. He was 85 years old.

His godson Peter Della Ratta is a successful businessman who resembles actor Ray Romano, and, like the TV hero "Raymond," is loved by everyone. Pete treasured his godfather and did everything he could to make him comfortable and help with his mission. Pete called Joe "Fahd," his way of saying "Father" when he was a kid, an upstate New York equivalent of the Aramaic "Abba."

"My only regret," Peter told me, "is that I wasn't able to take Fahd to see the houses he was building for the poor in Middletown."

When Hurricane Irene sent floodwaters ripping through the valley south of Albany, N.Y., in 2011, people lost their homes. Joe lived in Altamont, in a huge, old Victorian house with a wraparound porch near the top of a mountain that he bought with proceeds from his Joshua novels and used it as a center to teach adults and children about Jesus. He could see the devastation across the valley below and came down to help shelter the homeless and feed the hungry.

He wrote in his newsletter at the start:

So far we have only enough money to provide lunches for Middleburgh where the volunteers are serving 450 students a day for the summer. Some of the children asked if they could have a bag to put the lunch in, and when they were asked why they would need a bag if they were going to eat their lunch right there. Their answer was, "We want to bring our lunch home so we can share it with our parents. We have no food at home." How could one's heart not break at hearing such a remark?

Joe was ordained a Carmelite priest in 1955. He talked about Jesus with gang members in the Bronx, counseled coal miners in Pennsylvania, then worked 24/7 as a pastor in the diocese of Albany. There, he won no favors from the bishop for not running a fund drive that would be too burdensome for his poor parishioners and for permitting a divorced parishioner to receive Communion.

Joe retired from parish ministry in 1981 after his doctor told him, "Keep up this pace and you'll be dead within a year." That's when he turned to writing, and that's when Joshua was born.

Twenty-eight publishers, including me, turned down his novel of a modern Jesus figure who roams the earth and forgives people and challenges the church to be merciful. Michelle Rapkin, a fearless New York editor looked at it a second time and said yes. Joshua, published in 1983, was a runaway hit, at one point selling 30,000 copies a day.

The 21st century has not been kind to authors and publishers. Joe's New York publisher felt they couldn't publish any more of his books. The big sales were no longer there.

When the heating bills and taxes got too high and the royalties too low, Joe moved out of the mansion into a small apartment over the garage. He loved it there. It was close to the kitchen, where he loved to cook. He bought a little red used Smart car for $8,000 to tool around town and visit the sick and shop wisely.

Joe and I had become good friends over the years. He called one night in 2009 and asked if I'd edit a novel he was writing called The Homeless Bishop. I said yes.

Orbis Books published The Homeless Bishop in 2011. It's the story of Carlo, an Italian bishop who lives as a homeless beggar to better understand why Jesus so loved the poor.

"I think I know now," says Carlo, "why Jesus had such a tender spot in his heart for the poor. It takes great faith and simplicity of spirit to be poor and not despair. It takes enormous courage to decide to keep on living. The homeless are remarkable people. Their very life is a prayer -- desperate, silent, unspoken pleading with God to keep them alive. And by some miracle, no, not one miracle, but by a continuous chain of miracles all day long and all night, they do stay alive, especially on freezing cold days and nights."

Carlo returns to his diocese a year later and fights the Mafia so that homeless people can build their own homes. He adopts a family of homeless children and hires a nanny and turns the bishop's mansion into an inviting home where everyone is welcome.

Carlo becomes pope and throws a great feast for all the homeless people who can get to St. Peter's Square on Christmas Day. More than a million show up. Monsignors and priests and seminarians wearing aprons serve them in the Piazza and along the Via della Conciliazione and down the streets bordering both sides of the Tiber, and all the chefs of Rome invite the overflow into their restaurants and cook their finest cuisine.

And that is just the beginning of a series of events that foreshadowed the papacy of Francis.

In his last years, Joe couldn't get around much. The phone became his parish. Debbie Leach, his assistant, told me he was on the phone from 8 a.m. to after she went to bed, returning calls, making calls, helping people, encouraging them, telling them stories, and making them laugh.

I could expect a call at 9 p.m. on Wednesdays while in my pajamas and watching TV. But there was that friendly, husky voice: "Mi-chael!" He spoke the same two urgent syllables every time -- "Mi-chael!" -- as if alerting me to wake up from my electronic dream and run to the window and see something wonderful like a shooting star.

He phoned his godson Pete every night at 11.

"It was the best part of my day," Pete said. "When I was a kid, Fahd taught me to talk with Jesus every night. I got spoiled when I grew up because talking with Fahd was like being with Jesus. Now I'll lean on what he taught me, the same faith I'm teaching my son, Athen."

Debbie Leach called Joe "Fuds," the nickname given him by Pete's brother Joey when he was a kid. "Fuds was the most loving person I ever met or I'll ever meet," she said. "He had time for everybody and he gave money to everybody and anybody. I've never met anyone like him and I never will."

When Debbie and her son needed a place to live three years ago, Joe invited them to live in the mansion. It has many rooms.

"When I got home from the hospice the night he died," she told me, "it was dark and I could feel God hovering over the mountain. Fuds was there. He felt like a giant with big arms hugging the whole house. He was bigger and stronger than ever, and all I could feel was peace, and I was grateful for the chance to be close to this wonderful man. He's with his best friend now."

That night, after talking with Debbie and Peter, I knew I would write a column about my friend Joe. I closed my eyes and saw his face, the soft blue eyes more peaceful than ever. I asked, "What do you want me to say?"

I heard a voice: "Talk about Jesus."

The last line of The Homeless Bishop reads: "The homeless beggar belonged everywhere and to everyone."

[Michael Leach shepherds the Soul Seeing columns for NCR and is editor at large of Orbis Books.]