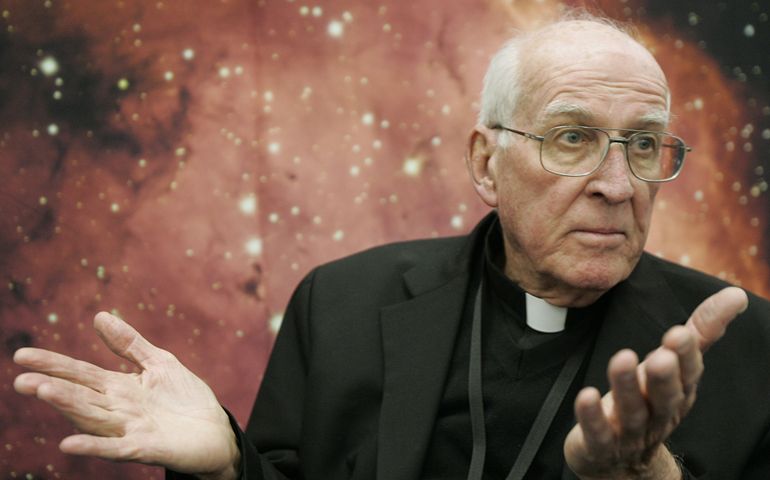 I traveled to Europe as a young seminary student and had my first encounters with nonbelievers. They awakened a sense of the fragility of my faith with which I have been dealing all my life.

Having grown up Catholic, I was pretty sure of myself and had given little thought to people who struggled with faith or were not believers. These three encounters changed all that.

One was with a physics professor from a university in Texas who happened to be seated with a group of us at a dining table on the ship from Montreal to Le Havre. He described himself as an atheist, the first I had ever met, and during the six-day crossing, at which we sat in the same assigned places at the table, he argued against belief in God.

"Love is a function of the liver," he pointed out. I wasn't captivated with his argument but was impressed that he had the courage to reject faith and say it out loud.

A second encounter was at Speakers' Corner in Hyde Park in London. A man was standing on a box railing against religion, specifically Catholicism. He made all kinds of accusations, including some that were ridiculous to me, but he was wildly supported by the 20 or so people in the audience. In my naiveté, I challenged him, but before I got half a dozen words out, the crowd shouted me down and I retreated to the nearest park exit.

A third was on a train in Ireland. After learning I was in a seminary, an English passenger described himself as an agnostic. He said he wanted to believe in the worst way, but honesty couldn't allow it. I found myself appreciating this stranger who was kind and intelligent.

The seminarian with whom I was traveling was several years ahead of me and studying theology. I was surprised and disappointed that he had absolutely no answers for the Englishman, nor did he seem interested.

Those experiences set off a lifelong struggle with my own doubts. I still struggle, but I've made progress, especially in one area: not looking for scientific proof for the existence of God. That doesn't mean I've given up on the rational. My faith is rational, though not provable by scientific means. It means leaving behind "God the Magician."

A recent piece on National Public Radio discussed this point, quoting Pope Francis speaking to the Pontifical Academy of Sciences that people shouldn't view God "as a magician, complete with an all-powerful magic wand."

Instead, the pope suggested, God "created beings and let them develop according to the internal laws with which he endowed each one, that they might develop, and reach their fullness."

The NPR piece, written by Adam Frank, an astrophysics professor at the University of Rochester and self-described "evangelist of science," quotes George Coyne, a Jesuit priest, astronomer and former director of the Vatican Observatory.

"The religious believer is tempted by science to make God 'explanation,' " said Coyne. "We bring God in to try to explain things that we cannot otherwise explain. 'How did the universe begin?', 'How did we come to be?', and all such questions. We sort of latch onto God, especially if we do not feel that we have a good and reasonable scientific explanation. He is brought in as the Great God of the Gaps."

Coyne further said, "One gets the impression from certain religious believers that they fondly hope for the durability of certain gaps in our scientific knowledge of evolution, so they can fill them with God. This is the exact opposite of what human intelligence is all about."

I often hear prayers in church or elsewhere that appeal to this magician God. We ask God to do things God may expect us to do ourselves -- like reducing poverty, putting an end to war and taking care of the environment. Most bad things happen, ultimately, because we allow them.

I am learning that using our intelligence is not anti-spiritual or anti-religious. It is a gift from a generous creator. I believe God expects us to use it, acknowledging that there are "kinds" of intelligence and that knowledge comes through nonscientific as well as scientific means.

Coyne says he thinks no one comes to belief in God by proving God's existence "through anything like a scientific process." Like knowledge gained through art, literature and music, it's at least as much a matter of the heart as of the mind.

Still, said Coyne, "for those who believe, modern science does say something to us about God. It provides a challenge, an enriching challenge, to traditional beliefs about God."

And for me, evolution -- the manner in which God created the universe -- makes creation all the more awesome. The beauty of creation and the intricacies of the micro and macro worlds are awe-inspiring.

How much more reason do we, living when we do, have to see the universe's elegance than the people who lived at the time of the author of Psalm 8?

When I see the heavens, the
work of your hands,
The moon and the stars which
you arranged,
What is man that you should
keep him in mind,
Mortal man that you care for
him?

As painful as it was to encounter unbelief on my long-ago trip to Europe, I'm now grateful that it forced me to examine my faith and my idea of God more closely, to accept uncertainty, be grateful for whatever "amount" of faith I have and to have patience with myself and God.

[Tom Carney, a retired journalist, lives with his wife, Amparo, in Des Moines, Iowa. He writes a weekly blog called Skeptical Faith at www.skepticfaith.blogspot.com. All of the Soul Seeing columns can be found online at NCRonline.org/blogs/soul-seeing.]

Spirituality | Our intelligence is a gift from a generous creator

Iraqi archbishop: Plight of fleeing Christians has challenged his faith