The book of Jonah is one of the Hebrew Scriptures' most significant writings. But since many of us don't recognize its literary genre, we miss the theology the author's trying to convey. 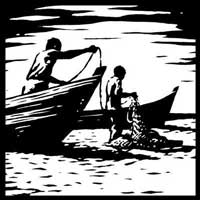 We can't approach all Scripture with the same mindset, or assume every text is a factual report of what happened thousands of years ago. Our sacred authors were certainly inspired to convey their ideas of how God works in our lives, and to provide us with the implications which flow from such actions, but like all authors, they were free to employ different literary categories. Some opted for songs, poetry, or myths. The author of Jonah chose satire.

Were it written in my lifetime, Jonah probably would have first appeared in MAD magazine, or as a Monty Python skit. As with all satire, no one would originally have taken it literally. Everyone knows people can't run away from God, fish don't swallow people, and all Assyrians never accepted Yahweh as their God. The author's theology doesn't revolve around the story's humor, irony, exaggeration, or ridicule; it's centered in his readers' stupidity and vices.

Like many followers of God, our faith ancestors fell into the trap of creating mental images of the divine being with whom they related. They might not have known what Yahweh looked like, but they were fairly certain of God's behavior patterns. Yahweh's personality was predetermined, leaving little or no room for change; no differences to discover.

The fictional Jonah represents those of us who've squeezed Yahweh into our mental box, yet are forced to constantly deal with Yahweh's successful escape attempts. How do we relate to a God who refuses to stay imprisoned in our ideas of God?

The confused prophet employs this "uncontrollable God" defense for trying to flee to Tarshish after Yahweh originally sent him to Nineveh. "I know you are a gracious and merciful God, slow to anger, rich in clemency, loath to punish." In other words, "I was certain that after I'd proclaimed the destruction of the city, you'd change your mind and I'd be left holding the bag."

Yahweh eventually "repented of the evil he had threatened to do to them; he did not carry it out." Nothing more devastates a prophet than to have God go back on the word the prophet had originally been commanded to deliver. If followers of God can't depend on God's word, on what can we depend?

The late expert on the Hebrew prophets, Hans Walter Wolff, dealt with this dilemma in just one profound statement: "God doesn't have to be faithful to God's word as long as God is faithful to God's people." God's relationships always trump God's words.

At times, to maintain a meaningful, life-giving relationship, we've all had to change our words to others. God's no different. If we're serious about relating to God, we're forced to provide God with room to change and evolve as our relationship changes and evolves.

Our sacred authors believed that God isn't some universal static force, always restricted to do the same things in the same ways, someone we once learned about in a catechism, whose personality has always stayed the same -- a personality created in our youth.

That's why it's significant that in today's Gospel pericope, Jesus' first four disciples are simply called to follow him -- a person. There are no dogmas to memorize, no institution to join, no philosophical tenets to profess. They only have to make people more important than the fish around which their lives revolve. Not only do they have no idea where he's taking them, they're committing themselves to a lifetime of discovering who this Galilean carpenter actually is.

As with Jonah, all their preconceived notions will eventually be forced out the window. He won't turn out to be the Messiah the vast majority of Jews were expecting. As Paul of Tarsus later discovered, they'd spend the rest of their lives saying "Yes!" to this itinerant preacher they'd encountered on the Galilean seashore, adapting their value systems to his value system.

I often wonder what still lies around the corner for us as we continue to surface the many dimensions of the risen Jesus' personality? Somehow he/she never fits snugly into the boxes we've created. Then again, if Yahweh can repent, there's always hope for us.

The meaning of Michael Brown