Most biblical scholars agree that there is no empirical proof of Jesus' resurrection. The appearances of the risen Lord were faith encounters; the early disciples saw Jesus and experienced him as risen because they believed in him and in the words he had spoken to them. 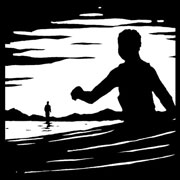 But the German Lutheran biblical scholar Martin Dibelius (1883-1947) cited what he called the "X-factor" as proof of the truth of Jesus risen. This X-factor, or Jesus factor, accounted for the differences in the attitude and actions of Jesus' disciples before and after his resurrection. These differences are astounding, said Dibelius, and can be attributed to nothing else save the grace and the Holy Spirit bestowed on the apostles by the risen Jesus.

Before Jesus' resurrection, the apostles appeared dense, confused and afraid. They misunderstood Jesus' teachings and misread his intentions. They were unclear about how he would exercise his messiahship. They misconstrued the mission in which they were to share and sought to fulfill their own ambitions instead of becoming servants of all others, as Jesus was.

They did not remain awake to pray with him; in his most desperate hour, they fell asleep. When Jesus was arrested, many fled, and even Peter denied any knowledge of Jesus and any relationship with him.

But then something happened -- and the apostles were so different, so completely transformed, that even an unbeliever would be forced to admit an X-factor. We know and believe this to be the suffering, death and resurrection to life eternal of our Lord and God, Jesus Christ.

After Jesus' resurrection, the apostles were bold and courageous. They did not hide; they preached the kerygma openly, as today's first reading from Acts tells us. Even when given orders from the Sanhedrin, they heeded no voice but God's and continued to preach in Jesus' name. They even pointed out to the high priest and the Sanhedrin that they had been complicit in Jesus' death: "Though you had him killed by hanging him on a tree" (Acts 5:30).

Were these apostles the same men and women who had followed Jesus and let him do all the talking? Were these the ones who shied away from any conflict "for fear of the Jews"? Yes, indeed, these were the ones who rejoiced in the fact "that they had been found worthy to suffer dishonor for the sake of the name" (Acts 5:41).

These are the very ones who had come to believe in the saving sacrifice of Jesus and who would one day join their voices with the living creatures and elders in heaven to acknowledge and proclaim: "Worthy is the Lamb who was slain ... to the Lamb be blessing and honor, glory and might, forever and ever!" (Revelation, second reading).

Encounters with the risen Christ, like the one the Johannine evangelist shares in today's Gospel, fueled the faith and fervor of the apostles and prepared them for their mission. That mission would be all-inclusive and universal, as the great catch of fish dramatically attests.

After breakfast on the shore, prepared and served by Jesus, the conversation between Jesus and Peter cut to the heart of who Peter was. He who had professed loyalty to Jesus, even if it cost him his life, had vehemently denied even knowing Jesus.

Within this post-Easter encounter, often called the rehabilitation of Peter, Jesus assured Peter of his love and forgiveness as well as his position as nourisher of Jesus' lambs. "Feed them," Peter was told.

By the grace of Jesus' resurrection, he would do so until death, a death he endured for Christ.

The post-Easter transformation of Jesus' apostles prompts each of us to ask ourselves: How does the X-factor, or Jesus factor, figure into my life? Have I reached out gratefully to receive the graces that are mine because of Jesus risen? Have I allowed that grace to fill me, mold me?

Have I allowed it to make me more responsive to God's loving overtures to me in the poor, the unwanted, those hated, feared and mistrusted for any reason? Am I a vital force of faith in this world? Do others notice?

Does my witness to the risen Lord make people desire a deeper relationship with God? Do I make a difference for good in the lives of those with whom I associate? Am I courageous in witnessing to God's word and wisdom revealed in Jesus, despite suffering?

If we cannot respond positively and powerfully to all these questions, then let us take advantage of the sacred texts for the Easter season and immerse ourselves more deeply in this faith of ours. Jesus lives! Amen with my lips. Amen with my life.

As Advent approaches, be alert to the signs of the times

Reclaiming the mystical interpretation of the Resurrection

Your thoughts on updating the Vatican II lectionary