Of what are you afraid? It might be snakes, bankruptcy or things that go bump in the night. Whatever you name, it's ultimately a fear of death and her little sisters, pain and diminishment. 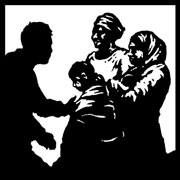 Not only that, but most of our nastiness comes from that same dread. Even before we can begin to articulate what we feel, we're acting out of those fears: If you have a toy, I want it, and having it will make me important, or at least more important than you.

Fear of mortality looms as the decisive delimiting factor of human life, and we'll find it at the root of innumerable evil actions -- all misguided efforts at self-preservation. Just look at Genesis, where Adam used blame and lying to preserve his reputation, where murder was Cain's attempt to keep Abel from besting him. Subconsciously, we tend to interpret every threat as a hint of death, and our every resulting malicious action attempts to thwart that perceived threat.

Fear of death is the trap from which Jesus wanted to free humanity. That's why in today's Gospel he could speak of his upcoming passion not as suffering or shame, but as his glorification.

In the perspective of John's Gospel, the triumph of the cross happened at the moment the dying Jesus proclaimed, "It is completed." That was the moment of his final victory, the consummation of his faith that God's love is greater than death. Thus, Jesus could say, "God will glorify him at once."

Jesus was free from fear of death because he believed in who he was as Son of the Father. He was free to face death, pain and shame because he knew they could never define him. He had to die to fully reveal that truth about himself and God.

Theologian Sandra Schneiders explains, "John's Resurrection Narrative is not about Jesus' vindication after his shameful death. It is about where and how his disciples … will encounter Jesus as their Lord and God" (Jesus Risen in Our Midst, Liturgical Press, 2013).

That is precisely why at the Last Supper Jesus combined the explanation of his imminent glory with the command that his disciples love as he did. If the world is to know him and his glory, it will only be through those who share his freedom and live in his love (John 15:10).

Jesus called this a "new commandment." In fact, it really is different from the command to love our neighbor or our enemy.

This commandment is "new" also because unlike the "two greatest commandments," it does not refer directly to love of God but rather to human love in communities empowered by God's love. It is faith in God's love that frees the members of such communities to love without measure. Theirs is the love that transforms people and can eventually transform their whole world.

The early Christian community strove to embody that love just as we do. In the readings of these Easter weeks, we hear of their life together and their dreams. In this week's reading from Acts, we hear about the missionary work of Paul and Barnabas. They saw their task as one of encouraging and strengthening the spirits of their communities, reassuring them that suffering was inevitable and was ultimately a part of the mystery of sharing Christ's glory, a truth so counterintuitive that theory was insufficient. It had to be experienced to be believed.

The reading from Revelation, like last week's, offers the invitation to dream, to contemplate the future God has in store for all of creation. This is apocalyptic literature at its best as it nourishes our imagination and spurs us toward a future that will come about only because God dwells in our midst.

As we continue to celebrate the Easter season, our readings are both brutally realistic and beautifully inspirational as they invite us to share in Christ's glory. They challenge us individually and as communities to follow Jesus in taking a leap of faith in God's undying love for us.

Sharing the faith of Jesus will free us to live in his love to such a degree that our families and communities will be signs of his presence. We will become people who, as Paul says, glory in the freedom of the children of God. We will learn to act as people who have nothing at all to fear.

Season of Creation Daily Day 34: Come and see the works of God