Our readings for this Fourth Sunday of Lent make us privy to the slow development of the Christian understanding of salvation. We begin with a reading from 2 Chronicles that sums up much of Old Testament salvation history: God gives the people good things, the people sin and are punished, God saves them again -- and the pattern repeats itself.

When we flesh it out a bit, we see that this historical scene presents Israel in an early phase of its religious development. We meet this people in the midst of their rebellion: They have denigrated God's gifts and then mocked the prophets who tried to call them out. 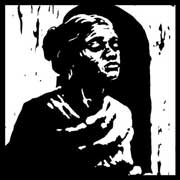 Having turned their hearts from God, their enemies fulfill their misguided hearts' desire by removing them from the territory God had given them, the place where they thought they could always find God -- even if only when necessary. But then, this God who won't be limited to their designs uses the enemy King Cyrus to save them and they return to the land and rebuild the temple.

The people's sense of salvation at this point is elementary. God is the author of good, but the people sin and suffer the inevitable consequences. Finally, God saves them by restoring them to the original good life. Everyone hopes that they have learned their lesson.

Whereas Chronicles saw salvation largely in physical and geographical terms, Paul tries to help his audience understand salvation as an intimate experience of knowing the love of God and all it entails.

Paul's shorthand description of salvation is the phrase "in Christ." Following his lead, in every eucharistic celebration we declare that God's honor and glory are revealed "through him, with him and in him." Although we may not have thought much about it, the phrase "with him" implicates us: We too are to participate in the unity of the Holy Spirit, manifesting the glory of God in our world.

That's what Paul is saying to the Ephesians: In Christ, we are brought to life, raised beyond mortality, and share Christ's power to overcome evil. We are not only saved, but called to continue the work of salvation.

Paul underlines this message by saying that we are God's handiwork. Here he uses a word for handiwork that recalls God the Creator, referring precisely to God's artistry, similar to that of a potter or a poet. Paul says we are God's work of art, graced to carry on the good works God has in mind.

John's presentation of Jesus' conversation with Nicodemus deepens Paul's theme. The proclamation begins with Jesus' explanation of his vocation: God's love for the world could not be fully expressed by anything less than the Incarnation. Jesus describes himself as the one sent to give flesh to God's great love. In spite of what anyone might say, God does not come to judge, but to offer the life that is salvation. So far, so good.

Now we get to the part that some evangelicals love to repeat and that has always troubled my Catholic soul: "Everyone who believes ... will have eternal life." All we have to do is believe? Does that mean I've made it because I recite the creed? It sounds like an insurance policy.

The Byzantine liturgy emphasizes Christ's victory by saying he used death to trample death. This is the mystery at the heart of Christianity.

In John's Gospel, the cross was Jesus' hour of glory (12:23). The message of today's readings is that it is not his glory alone. We, too, can share in his freedom and life if only we believe.

But this belief goes beyond assenting to a dogma. It means that we bet our lives on the belief that Christ lifted up has overcome every evil and that we have nothing, absolutely nothing, to fear. That does not mean we will never suffer, but that God's love, stronger than even death, is available to us, no matter what.

To believe that is to know that salvation changes everything. This understanding of salvation leads us to be God's handiwork, continuing Christ's mission in our world.

Who is my neighbor?

Knowing grace only when we see it