Leadership is lacking in this election cycle 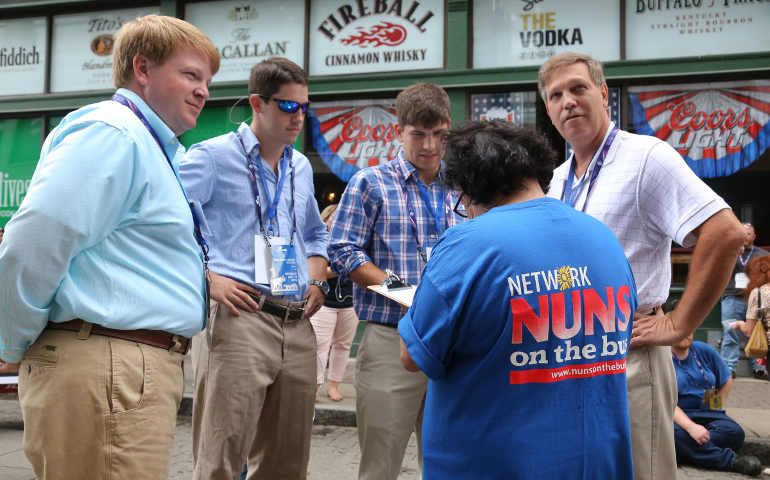 Of all the election cycles I've ever been through, this one has be the strangest of them all. The old ones rested on policy differences: Whose plans promised higher employment or lower taxes? Which candidate best understood the international arena and could function in it on our best behalf? Which ones depended most on weapons, which ones on diplomacy? Which plans would do the most to provide a little bit more economic security for everybody? Who cared more for the one percent than for the other 99? Those elections were based on metrics meant to be able to be counted. It gave us tools with which to calculate our common future; it gave us particulars to examine; it offered specifics to debate.

Policies -- good, old fashioned, political policies designed to take an ethical and beneficent system and make it even more honorable and more beneficent -- have apparently become boring, even irrelevant. Maybe even obsolete. Now the electorate calls vulgarisms and insults "straight talk" and political planning "wonky." Which leads to the question that is as much about the rest of us as it is about any of the candidates: Who's partisan and who isn't? Who's smart and who isn't? Who cares more for the country than they do for the party in question?

And the "leadership," it seems, are just as confused as the rest of us. The problem is that the answer to the leadership question is, "What leadership?"

Paul Ryan, Speaker of the House, number 3 in line of presidential succession, set a high bar for such nonsense. "If the presumptive candidate of the Republican Party does not meet the standards of the Republican Party, I will not endorse him." It was, I thought, a line in the sand. There was surely a point where enough was enough. And I breathed a sigh of relief. Not to worry: There was a hand on the tiller.

Ryan's sentence itself was a beacon. It called all of us to measure our politicians against the values that had marked and mentored this country for decades. Each of us, we knew clearly now, had an obligation to match our politicians to our ideals, to choose our national integrity over our voter registration data.

It was a refreshing moment. Just when we thought the whole system had fallen apart, we were reminded that if we choose a candidate for any reason other than their adherence to the democratic model that built this society to begin with, it would be our very character as a country that stood to be shattered. In the end, we were to understand, it is our ideals that count most toward keeping this country great.

But then, in the face of infantile insult after insult, Paul Ryan himself weakened and wilted. He stuttered and equivocated. He hemmed and he hawed. He ducked and dodged. Always making leeway for more insults and ignorant, impulsive, meaningless conclusions. In fact, things were getting better, he told us.

But nothing did. As in Trump's substanceless comments like, "Bernie blew it. He sold his soul to the devil." (Meaning Bernie endorsed Hillary rather than adoring at the shrine of his ego.) Or, insisted, If Ivanka, his daughter, were sexually harassed at work, he "would like to think she would find another career or find another company." (As in, women are responsible to avoid the immoral behaviors of men.) Or saying he knows Russian President Vladimir Putin who "won't go into Ukraine" -- and then saying he doesn't know Putin, and that anyway the people in the Crimea wanted Russia to come in. Or saying the U.S. will keep its commitment to NATO only if the other countries pay what they owe for it. (It sounds like good business practice until the historical mainstay of our own culture begins to disappear, one small country at a time, as it did in the Europe of 1939-44 because they didn't pay us enough to help them.)

And still nothing happened. The election caravan of crude and crushing comments moved merrily along while Republican after Republican climbed meekly aboard, most of them eyes down, and, most of all, silent. None more so than Paul Ryan. When women were insulted. When Muslims were maligned. When Latinos were impugned. When long-time public servants -- Republicans as well as Democrats -- were branded like cattle against any thoughtful consideration of their plans for the country: "Little Marco," "Low Energy Jeb," "Lying Ted." And, of course, "Crooked Hillary" for using an email server that the FBI investigation itself concluded was not done maliciously, or with "intent to harm."

Then, Donald Trump, called out Federal Judge Gonzalo Curiel, on the grounds that as an American of Mexican heritage he could not be unbiased in a case being brought against Trump himself. Because Trump plans to build a wall between Mexico and the United States to keep more undocumented Mexicans out of this country, he argued, Judge Cueto had to be biased against him. Law or no law.

Suddenly, Paul Ryan sprang into action again. This attack on a male member of the official establishment was apparently the line. The rest of the country notwithstanding.

And yet, the real difficulty is not Donald Trump. Everyone gets a chance to see what Donald Trump is doing. What he says, and what he doesn't, what he is and what he isn't. And most of all, what it implies for the leadership of the country in days to come. It's up to us. It's about what, as responsible citizens, we really want to see in the White House, on the world stage as an icon of Americanism. After all, most of the dictators and demagogues of modern history have been elected. And now it's our turn to choose

No, the real difficulty, as I see it, is the lack of anything approaching party leadership throughout this entire period during which the level of discourse deteriorated before our eyes. In the ashes of this election lies a lack of political courage, the loss of genuine concern for the tone and substance of this present electoral campaign. Instead of "I cannot endorse that statement of Donald Trump, this kind of name-calling, that kind of ignorance," what the country has gotten is silence from the very leaders who are supposed to be safeguarding the level of democracy in this country. There is not an elementary school teacher in this country who would have tolerated this kind of talk on the school playground, not a high-school debate coach who would have allowed such abuse from any of their teams to go on uncorrected, uncensored.

And in the course of the situation, the officials of the Republican Party writhe in the midst of the political struggle. If they reject the man, they are, in effect, saying that the candidate they have invested an entire primary on is not a real Republican at all. He is some kind of fraud. Some kind of cartoon of the party. And if they do not renounce his insults, his silly obstruction of reality in public, they have abandoned the very party they have given their lives to lead. It's impossible not to sympathize with that conundrum.

But there is more to be concerned about than one candidate and one election. There is the integrity of the party itself.

Those who want to be seen as rejecting a campaign based on insults but refuse to denounce it publicly and by name will themselves lose in the end. And the party with it.

Those who hope to be seen as rejecting a mud-slinging campaign but refuse to withdraw their endorsements of it are holding a two-edged sword. Their attempt to be on the political safe side in case, in the end, Trump is elected, may well jeopardize the record of their own political competence in the future.

To go on denouncing the loss of values while never seeming to notice that it is your own candidate who has violated them is a clear lack of leadership and the greatest of errors.

From where I stand, leaders who attach themselves like lackeys to a caravan of ruffians in the long run risk both personal and political support. It will be the political patriots and professionals who speak their concerns about the Trump campaign who will finally prevail in the history of party heroes. Their names are already known. And growing.

Why the difference? Because leaders are counted on for character and courage. And leadership. The problem is that the rest of us stand to bear the results of what happens to a country under the sway of leadership that refuses to lead. Especially when the people need it most -- like now.

Politics | Leadership is lacking in this election cycle

Five faith facts about Marco Rubio: 'Once a Catholic always a Catholic'

What some important Republicans have to say about Donald Trump

Latinos who vote against Clinton are repeating bad history