The real electoral problem may lie within us 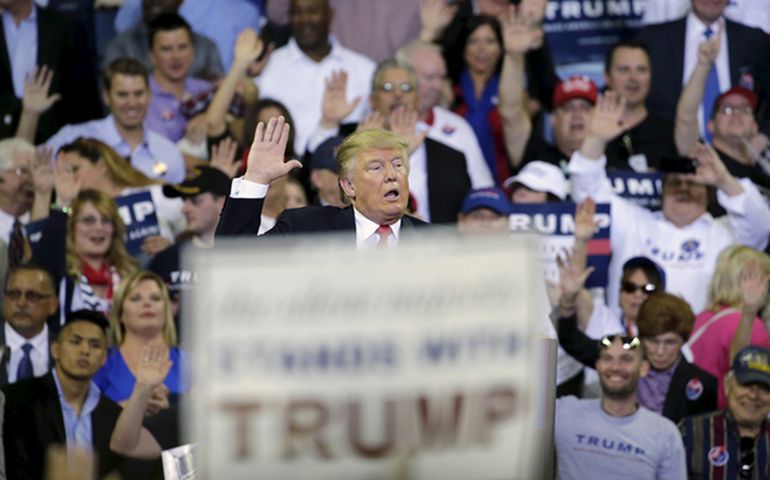 Presidential candidate Donald Trump asks supporters to raise their hands and promise to vote for him at a campaign rally March 5, 2016, in Orlando, Fla. (RNS/Reuters/Kevin Kolczynski)

We're in the middle of it now. But where it's going in the end may be to the wrong place entirely.

The election is over but we are up to our ankles in the detritus it leaves behind. The new issues that have emerged in this election — the Electoral College, the media, the fake news, the hacking — are serious ones, yes. And yet, I do not think that these are the most important elements to be addressed in this term's electoral autopsy.

Yes, we now have a minority president who skated into the White House on a system meant, some point out, to correct the democracy the founders purported to set up. The Electoral College, some argued, would balance the numerical disadvantage of the less populated Southern slave states with the larger, immigrant-populated Northern states by counting slaves as part of the population though they were counted for absolutely nothing else. Or, as others say, the Founding Fathers created the Electoral College in order to save us from "the tyranny of the majority." So now, with slavery ended, we are apparently meant to believe that some voters know better than others though we have yet to be told on what grounds that correction should occur.

And all of that would be problem enough surely.

But the real problem is that we are also left with something even more dangerous than an archaic political system. We now have an electorate for whom facts have no meaning and programs apparently have little value and generate even less interest. And we have a word for it now: We have become the 'post-truth' generation. We rely more now on the kinds of feelings that can be generated in the electorate than we do on the kind of facts that once shaped decision-making in this country.

For instance, no major news media devoted time during this electoral cycle to teaching the American public the advantages or disadvantages of any single political promise. Hillary Clinton kept saying she had a plan and we could find it on her website. In Clinton-land there were plans for everything. But no major networks bothered to create a series of programs to evaluate any of them, let alone all of them. Ideas, it seems, do not get the media the kind of ratings that bring in ad income, and so are now being routinely ignored.

From the Trump campaign, on the other hand, assertions — and often downright lies, not plans — were the coin of the realm. There were no details to chart, let alone compare to other plans around them.

Instead, though the media struggled mightily to expose the constant stream of lies that were the pillars of Donald Trump's campaign — Mexico is forcing criminals into the U.S.; Hillary is the most corrupt politician of all time; there was voter fraud in Virginia, New Hampshire and California; there are 3 million criminals in this country illegally; and "In many instances, [people's] health care costs are more than their mortgage costs or their rent" — the lies fell on deaf ears. One lie after another; 25 pages of them all neatly archived now but apparently without any importance whatsoever to the voting public at the time. Instead, name-calling and assertion became the coin of the realm. Vice President Joe Biden said that the details of Hillary's campaign "got drowned out by the most vicious campaign, the craziest campaign I've ever witnessed."

So, the political autopsy is in full swing and the focus now is on why the Democrats lost the election.

But I do not think that party politics are either the real question or a substantial answer to the question of how and why a national electorate simply ignored the name-calling, the lack of plans, the din of vague accusations and the myriad shifting promises of a candidate for the highest office in the land.

Nor was there any explanation of how it could be that the ill-advised use of a private email server by one candidate could possibly outweigh all the outright lies of the other.

Nor was there serious mention of the Constitutional crises the Electoral College was charged to deal with concerning the kinds of conflicts of interest that ought to preclude a candidate's qualifications for presidency.

Instead, it's becoming plain, the real electoral problem may actually lie in us, in the electorate. Why didn't we insist on some kind of public consideration of these issues before the election? Why didn't we demand answers and data and the public analysis and discussion of programs and plans, and of the advantages and disadvantages of each? What happened to serious examination of serious questions? One candidate won all three debates, the process designed to do just that, and lost the election regardless.

So, what is missing? Not in the political campaigns but in us?

I've considered two possibilities. The first thought that came to mind is that this country's easy dismissal of liberal arts in education may have finally come home to roost.

Our colleges, in large part, have become extensions of U.S. business. We teach our students how to make money, how to build corporations, how to compete in the marketplace, how to win in a digital world, and how to "brand" something. Do we require courses on government or the history of ideas anymore? How long has it been since we heard about anyone taking courses on the Great Books as part of the core curriculum? When did we stop wondering which of the great philosophers really told us the most about what it means to be good, to be happy, to be beautiful, to be truth-tellers? How long has it been since we have had a good discussion on the purpose of a university?

Why is it that the first things to be cut in response to our shrinking education budgets are courses on world history, philosophy, logic, ethics, great literature, music, and the arts? How much time do we spend these days teaching things that concentrate on the development of the human spirit, the definition of the truly human, human being. How often do we ask whether what can be done ought to be done?

The question is a simple one: When will we again give as much attention to stretching the thought process and nourishing the soul of the society as we do to increasing the earning power of part of the population?

Or second, when will the Hastert Rule — institutionalized by Dennis Hastert, Speaker of the House from 1999-2007 — be seen for what it is? Hastert allowed only those bills that were known to already have the support of a majority of the majority party to be brought to the floor of the House for a vote. It is a strategy that smothers the democratic ideal. It makes partisanship the unwritten law of the land. It is the creation of one-party rule in what is meant to be a democracy of conscience.

It all but silences the thinking of the minority party by refusing to submit for consideration the contribution of the minority voice to the legislative development of the country. It is a crime against the democratic commitment to work for the common good.

From where I stand, it seems that we ignored the evaluation of ideas in this election for at least two reasons: First, we no longer put much emphasis on idea development and critical thinking. And second, we long ago abandoned the hard work of working through ideas together, even at the highest levels in the land. What we have learned is to let other people do our thinking for us. Then, the rest of us can simply sit by, make up false news, and substitute name-calling for thinking, for public planning, for the Constitution.

But that's not what we call democracy. That's what's we call oligarchy and plutocracy — rule by a few. Both of which systems failed. We'd all recognize it quickly — if we ever learned about the effects of something like that to begin with.

Politics | The real electoral problem may lie within us

Shining an appreciative light on anarchism

Will Catholic voters make Joe Biden the next president?