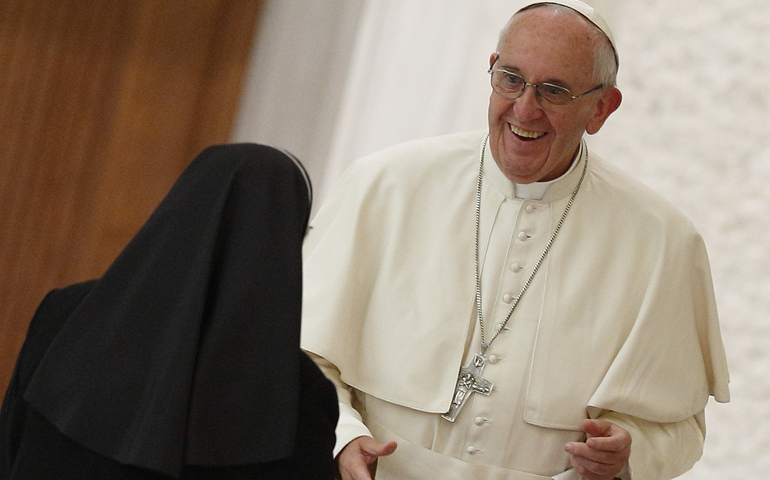 Pope Francis greets a nun during an audience with the heads of women's religious orders in Paul VI hall at the Vatican May 12. (CNS/Paul Haring)

Thursday morning, our Vatican correspondent Joshua McElwee broke the story that the pope had agreed to establish a commission to study the possibility of women deacons in the church.

It is significant that this decision was made in response to questions from religious sisters at the triennial assembly of the International Union of Superiors General (UISG), where some 900 sisters are meeting in Rome. Pope Francis showed that he is willing to listen to women and respond immediately to their suggestions.

Some believe that deaconesses arose because baptisms were by immersion, which required the total submersion of the naked neophyte under water. Thus deaconesses were needed for women’s baptisms.

If the pope really wants to know the history of the women deacons, he could not do better than to appoint Phyllis Zagano to the commission. She holds a research appointment at Hofstra University and is a columnist at NCRonline.org. Her many books include her award-winning Holy Saturday: An Argument for the Restoration of the Female Diaconate in the Catholic Church (Crossroad Publishing, 2000).

The permanent male diaconate was restored to the church at the Second Vatican Council. Before that, the diaconate was given mostly to men destined for the priesthood.

The permanent diaconate, which is available to married men, was promoted at the council as a solution to the shortage of priests in missionary territories. In fact, the United States has more than 18,000, or almost half of the 43,000 plus deacons in the world. Many bishops in Africa, the continent the council fathers thought would be best served by deacons, preferred catechists to deacons. Plus, Africa has lots of priestly vocations.

When permanent deacons were first ordained in the United States, most had full-time secular jobs and only functioned as deacons on Sundays by reading the gospel and giving out Communion. After the laity were allowed to distribute Communion, some wondered why the church was ordaining men for insignificant functions when it had full-time employees doing ministry without ordination.

Deacons can also preside over marriages, baptisms, and funerals, but if these are to occur in the context of the Eucharist, as is desired by most families, a priest is needed. As the number of priests continues to decline, deacons will have to take over these responsibilities whether people like it or not.

But even today, only about 18 percent of active permanent deacons are financially compensated for their work. And of these, almost a third are being compensated for non-ministerial work. In other words, most are employed outside the church or retired volunteers.

In short, the odds of making a living as a deacon are minuscule.

Although deacons can give the homily at Mass, priests rarely are willing to give up that privilege except when they do not know the language of the congregation.

Some have hoped that deacons would be allowed to anoint the sick, where there is a great pastoral need not being met by priests. The days of calling up the parish rectory to get a priest in the middle of the night to pray at the bedside of a dying person are over. You are more likely to get voicemail. Anointing, if done at all, is done once a week by chaplains at a hospital or once a month at a weekly Mass, for example on First Friday.

Allowing deacons to anoint the sick would fulfill a real pastoral need.

In the mid-1980s, the Hartford archdiocese, which at that time had more deacons than any other diocese in the country, decided it would not ordain any more deacons unless the deacon had a contract with a pastor giving the deacon principal responsibility for a major ministry in the parish, for example, religious education, marriage or baptismal preparation, youth ministry, or charities.

Archbishop John Whealon was responding to the complaint that deacons were simply glorified altar boys. He even tried putting a team made up of a priest, a deacon, and a sister in charge of a parish, but this experiment did not catch on.

One additional problem faced by deacons is the church law that requires a deacon whose wife dies to remain celibate the rest of his life. The rule is both stupid and unchristian.

Opponents to women deacons will come from two sides. Traditionalists will argue it is the camel’s nose opening the way for ordination to the priesthood. On the left will be some who say this is too little, too late. It is time for women priests.

One only has to recall the famous birth control commission, whose 1966 recommendation in favor of artificial contraception was ignored by Pope Paul VI in Humanae Vitae (1968).

But what is most significant in Pope Francis' response is the way it shows how open he is to discussion in the church of ideas and how he wants discernment to be the process by which the church makes decisions.

“Open and fraternal debate makes theological and pastoral thought grow,” he told the bishops at the synod on the family. “That doesn't frighten me. What's more, I look for it.” He wants that kind of discussion of women deacons.

In the past, the clerical establishment would discuss church matters behind closed doors so as not to “confuse the faithful.” With Francis, that day is over. It is clear he hates anything that smells of clericalism.

In responding to a question from the sisters about possible changes in religious life that are blocked by the limitations placed on them by canon law, he laid out his vision about how change should occur in the church. Changes must come only after a process of discernment and discussion with the Holy Spirit, and not just in weighing pros and cons of the possible arguments.

“Every change that you must do... enter into this process of discernment,” he said. “This will give you more freedom."

This is the way he proceeded with the synod of bishops when considering admission to Communion for divorced and remarried Catholics. Discernment is what he recommended as the process by which priests and individual divorced Catholics resolve this pastoral issue.

This same process of discernment is what Francis is calling the church to do in examining the possibility of ordaining women to the diaconate.

The pattern is clear. Discernment is his preferred way of dealing with change in the church. It is a slow process, and sometimes it is not pretty. But it is a process that trusts in the Holy Spirit and the people of God.