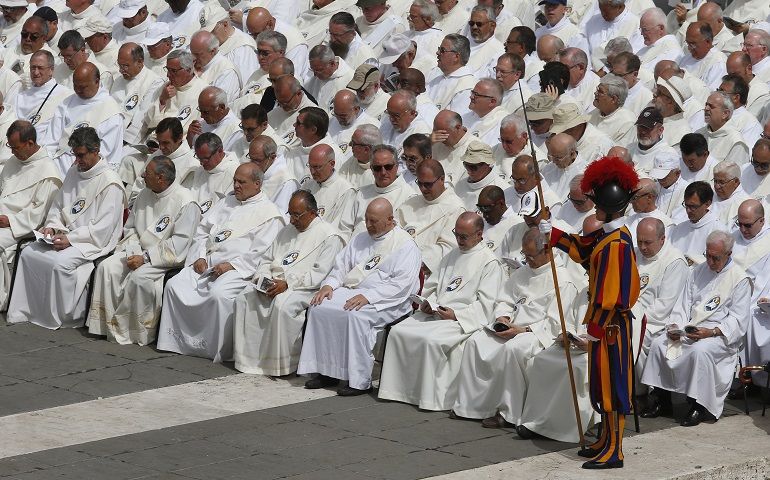 Deacons attend Pope Francis' celebration of a Mass for the Jubilee of Deacons in St. Peter's Square at the Vatican May 29. The Mass was a celebration of the Holy Year of Mercy. (CNS/Paul Haring)
This article appears in the Women deacons feature series. View the full series.

When I was asked by a reporter last week whether I favored women deacons, I hesitated and finally responded, "If there are male deacons, there should be female deacons."

The media is interested in this issue because Pope Francis appointed a papal commission to study the question of women deacons, including as a member our esteemed NCR colleague, Phyllis Zagano.

I find that argument convincing, but frankly, even if there were not women deacons in the past, I would still argue for ordaining women deacons today, just as I would argue for ordaining women priests. True, Jesus did not pick any women for the Twelve Apostles, but he did not pick any gentiles either. We would really have a priest shortage today if the priesthood was limited to Jewish Christians.

The church today does many things that Jesus and the early Christians did not do. For example, they would not recognize the Eucharist as we celebrate it today, nor would they understand why we are doing it in churches rather than in homes, and they would be appalled by all the statues (idols) in our churches. Before statues were accepted, the church went through a very ugly Iconoclastic Controversy. And during the Reformation, this controversy broke out again.

Even today, the Catholic church has a difficult time dealing with change. During the last two papacies, all discussion of serious change was suppressed. Today, the window closed after the Second Vatican Council has been reopened. This does not mean that every new proposal should be accepted, but it does mean that we should be open to serious conversation and debate on change in the church, especially on the role of women in the church. This debate should occur without name-calling but rather as friends in the Lord seeking what is best for God’s people.

You will notice that I said I hesitated when asked whether I supported women deacons. My hesitancy is not with women deacons, but with the whole idea of deacons as currently practiced in the United States.

The renewal of the diaconate was proposed at the Second Vatican Council as a solution to the shortage of native priests in missionary territories. In fact, the bishops of Africa said, no thank you. They preferred to use lay catechists rather than deacons.

It was in the United States where the diaconate took off. Of the approximately 45,000 permanent deacons in the world, around 18,500, or about 40 percent, are in the United States. Almost 80 percent of these deacons are in active ministry, according to the Center for Applied Research in the Apostolate, but only one out of six of these active deacons are financially compensated for their ministry. Thus, most U.S. deacons are part-time ministers and/or unpaid.

I find this odd. The U.S. church has lots of paid, lay ministers working full time while at the same time it has ordained deacons working part time, most of whom make a living doing secular work. Why are we ordaining part-time ministers and not full-time ministers?

Please note. I am not saying that deacons do not do good work for the church.

But the truth is that a layperson can do everything that a deacon can do.

A layperson can preside over a Scripture service or a funeral, things that deacons commonly do.

True, a layperson cannot give a homily after the Gospel at Mass. But that is simply a rule of canon law, which can be easily changed. There is no need to ordain people so they can give homilies. Just change the law.

True, deacons can baptize, but so can laypeople. I was baptized by a Sister of St. Joseph in the hospital when they thought I would die shortly after birth. That is why my middle name is Joseph. Baptisms by laypeople have always been recognized by the church.

True, deacons can witness weddings, but in Catholic theology the ministers of the sacrament of marriage are the two people getting married. The priest or deacon simply "assists" (Canon 1108). There is no reason a layperson could not perform this function, in fact Canon 1112 permits it under certain circumstances.

The truth is that we have deacons for the same reason we have auxiliary bishops, because they get more respect. Clericalism is so engrained in the Catholic soul that people will give greater deference to a deacon than a layperson; priests and people will give greater deference to an auxiliary bishop than to a priest, even if the priest is a vicar general. Ordination gives status beyond the actual competence of the person.

There is, however, one way to save the diaconate. Give it a ministry that serves a real need, one that laypeople cannot do -- anointing of the sick.

Today, if someone in your family is dying and you call the parish office after hours, you are more likely to get voicemail than a priest. Your chances of being anointed on your deathbed are miniscule in America. If you are lucky, you might be in the hospital when the priest makes a periodic visit. Or you might live in a parish that anoints elderly or sick people once a month at a weekday Mass. Otherwise, good luck.

Allowing deacons to anoint the sick would give them a sacramental ministry that meets an important pastoral need in our country.

Wouldn’t it be wonderful if the historical actions of women deacons provided the precedent for allowing both male and female deacons to anoint the sick? This is another reason I hope that the church allows women deacons.

If you can't go to confession, take your sorrow directly to God, pope says