Skip to main content
News
EarthBeat
This story appears in the Francis in the Philippines feature series. View the full series. 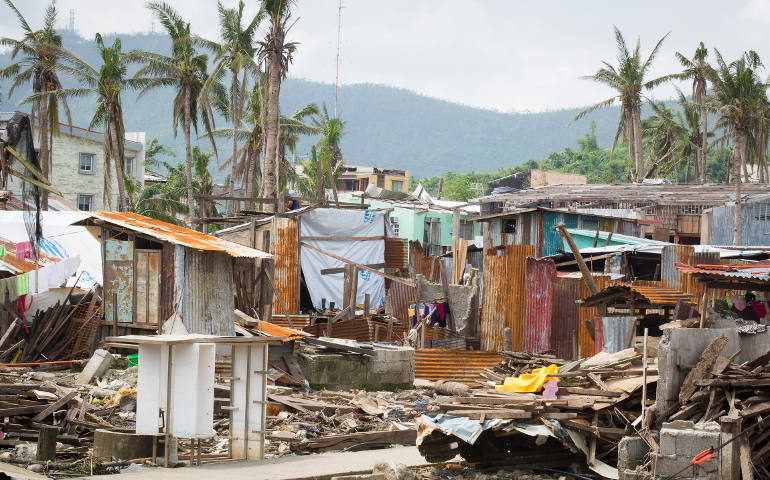 A new global network seeks to increase the Catholic presence in climate and environmental conversations by raising awareness within its ranks and by adding volume to the church's voice in the public sphere.

The Global Catholic Climate Movement officially launched Wednesday with 19 organizations -- including from the U.S. the Franciscan Action Network, Catholic Charities, and the Leadership Conference of Women Religious -- and 10 individuals, representing six continents and countries such as Argentina, the Philippines, China and the United States.

The group is a mix of laity, clergy, religious, scientists, theologians and activists in what the group has called a first-of-its-kind Catholic coalition.

"Our collaboration echoes the global dimensions of the Catholic Church and a shared sense of responsibility to care for God's beautiful, life-giving creation," their introductory "Statement to the Church and the World" reads.

It continues: "The basis of our concerns is scriptural and founded on the tradition of the Church. From Genesis through Revelation, Catholics accept as a revealed truth that creation and its order is a good that we must embrace and steward. This has been echoed and championed by Church leaders for two millennia.

"In response to what God has given the human race -- clean air, life-sustaining water, fruits of the earth's harvests, and the bounty of the sea -- we are called to honor God our Creator for these many blessings. We are obliged to respect these gifts, which are for all people. For this reason climate change is for Catholics a profoundly spiritual, ethical, and moral issue."

The movement has outlined two goals: to raise awareness within the church of the moral dimensions and imperatives for action on climate change, and to raise the Catholic voice on climate issues within the global public sphere -- in particular, advocating for a strong international climate agreement in Paris in December.

"We hear a lot from the scientists, we hear a lot from the politicians, and it's really important  ... to start talking about the spiritual side of climate change," said Ciara Shannon, a member of the newly launched movement and an Asian coordinator for interfaith group Our Voices.

Speaking to the role Catholics specifically can play in global climate discussions, Pablo Canziani of Acción Católica Argentina said, "Usually we are very quiet. We don't move as we should to promote certain social and other issues. But when we do start, we can do a lot of good if we do it all together."

For Canziani, a physicist and climate scientist who has studied the interactions of ozone depletion and climate variability and the impacts of climate on Argentine fruit and food production, climate and environmental issues cannot be separated from social problems.

"You cannot deal with one if you do not deal with the other," he told NCR. "What creates problems within society are the same drivers of environmental crisis, so we're working with that concept."

The global network's launch coincides with the papal trip to Asia, specifically the Philippines leg (Jan. 15-19), where several of its members hope to present their mission statement to Manila Cardinal Luis Antonio Tagle, who would then inform Pope Francis of the new collaboration at some point during his visit.

Though no formal meeting with its leaders is scheduled, debuting the Global Catholic Climate Movement in the context of the Philippines trip highlights the thousands of people who died and the more than million whose homes were damaged or lost when super Typhoon Haiyan struck in November 2013.

"The interdependency of creation and humanity is being underscored in Pope Francis's visit to Philippines," the movement's statement said.

For a country averaging eight or nine tropical storms a year*, the possibility of more high-intensity storms resulting from a warming planet -- as projected by climate scientists, including the fifth Assessment Report of the Intergovernmental Panel on Climate Change -- is "extremely frightening," said Shannon, who will volunteer during the pope's Philippines visit.

She told NCR that the level of awareness of the risks of climate change is low in parts of Asia, noting that some Filipinos didn't understand reports of a storm surge and thus didn't heed calls for evacuation.

"Probably the most important thing to do is to simplify the language, because what is climate change? It actually boils down to people's livelihoods, their families, their homes," she said.

The Global Catholic Climate Movement's emphasis on education has targeted two initial paths forward. First, it is working to consolidate on its website a global library of various church teachings on the environment: from popes and the Vatican, as well as statements and letters from bishops and their national conferences, such as a 1998 pastoral letter from Filipino bishops.

The second is promoting the upcoming papal encyclical on human ecology, highlighting key aspects of the teaching document for Catholics to discern and discuss.

In April 2012, Canziani and two others held a daylong workshop on environmental issues during the Argentine bishops' weeklong meeting. Among the participants: Buenos Aires Archbishop Jorge Mario Bergoglio, who a year later became pope.

Canziani recalled the future Francis taking notes throughout the session and posing questions following its conclusion. From such interactions, the Argentine physicist anticipates his countryman to carve out a large space in the encyclical for discussing economic growth and development.

"Economy is part of the bio-system. It's not beyond the bio-system, it has to respect the physical and biological laws of the earth, and we have to think of development not necessarily being linked to growth," said Canziani, referencing the work of Chilean economist Manfred Max Neef.

Asked about the Latin American church's activity in environmental issues, Canziani said it hasn't reached the level he'd like to see, though he applauded the work of bishops in Argentina's Patagonia region. He has detected a greater sense of concern among poor and working-class people in rural regions who have closer contact to nature. Issues range from water management in Argentina and Chile, to the Amazon in Brazil, to mining in Peru and parts of Central America.

As for the global Catholic movement, it has yet to finalize specific actions it will take, but intends to leverage its new international ties to organize worldwide, be it through prayer vigils, fasting or other avenues. There has been talk around an event during Lent, as well as discussion of possible pilgrimages in different countries throughout the year.

While attention-grabbing declarations from church leaders like the pope are important, Canziani stressed that Catholics worldwide can't depend solely upon them; the laity must be involved.

"We are on both sides of the game -- we're in the real daily life, and we're also in contact with the spiritual in many ways, so we are the ones who have to act in society to change things," he said.

*A previous version of this story misstated the average annual number of tropical storms hitting the Philippines as 22.

A version of this story appeared in the Jan 30-Feb 12, 2015 print issue under the headline: Catholics launch global climate movement.