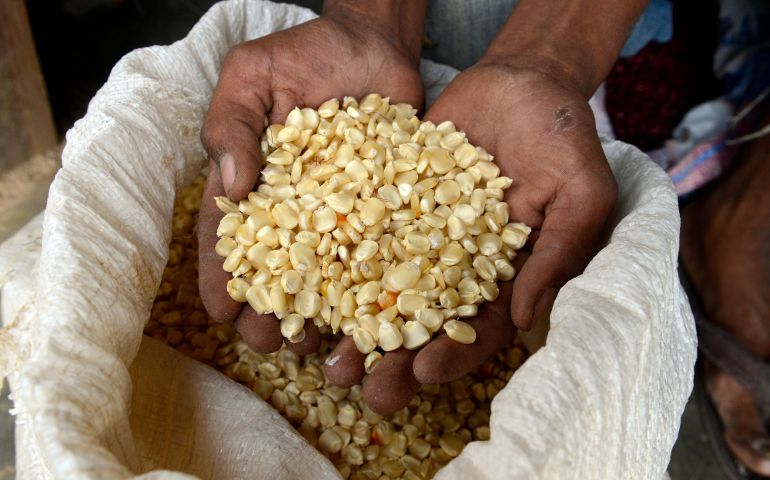 The broad strokes of the issue have been reported: Higher temperatures and changes in rainfall patterns caused by climate change will likely transform the agricultural landscape of much of the world. In Central America, the livelihoods of a million small-hold farmers of maize and beans, the region's staples, will be at risk. The food security of the region is under threat.

Like the cause of this looming crisis, the tools and techniques to combat the effects of climate change are generally known. What is hard is translating the generalities into courses of action in certain geographic locales.

This problem is addressed in a new study from Catholic Relief Services, the International Center for Tropical Agriculture, and the International Maize and Wheat Improvement Center, "Tortillas on the Roaster," released Tuesday. The study, funded by the Howard G. Buffett Foundation, focuses on Nicaragua, Honduras, El Salvador and Guatemala.

The executive summary of the report sets the problem: "Until now, climate change projections for Central America have been general, covering wide geographic areas. Given the heterogeneity of the climate, landscapes, and agricultural systems in the region, it is hard to use general trends for decision making at the farm or landscape scales.

"As a result, smallholder farmers and other decision makers have been slow to adapt adequately to the threats of climate change. They know that climate change is occurring, but they do not have enough detailed information to act on it."

"Tortillas on the Roaster" aims at filling this knowledge and action gap first by providing detailed climate projections for areas of 5 square kilometers or smaller for two distinct time frames in this four-country region: the near term, 2010-2039, and the mid-term, 2040-2069.

It looks at the impact of higher temperatures and changing rainfall patterns on these four countries' most important crops, beans and maize. The study then provides "detailed, actionable information for specific areas" directed at small farmers, extension agents, the development community and policymakers.

The researchers say "Tortillas on the Roaster" is "the first study of its kind" to make "highly specific, local-level predictions." They applied a downscaling method to existing global climate models to produce data relevant to specific areas of five-square kilometers or smaller. They were then able to produce maps detailing the climate change effects in specific areas.

The results of these climate projections were validated during field visits to 12 sites across the countries, the report says. The researchers also conducted a series of farmer workshops to better understand farmers' perceptions of the risks of climate change.

The report highlights the importance of environmental management. It says, for example, that farmers who employ good soil and water management practices and crop diversification will be able to mitigate the effects of climate change in an economically sustainable way.

"The report highlights that there is no quick fix," said Paul Hicks, regional coordinator of the Global Water Initiative-Central America project for Catholic Relief Services.

"This is about getting back to basics," Hicks said in a statement released with the report Tuesday. "Extension services across the region need to be reinvigorated to train small farmers in soil and water management. And governments need to lead, they have the ability to make a real difference through setting climate-smart agricultural policies."

In the forward to the report, Howard G. Buffett, president of the Howard G. Buffett Foundation, which funded the research, wrote that the information that "Tortillas on the Roaster" contains is "critical to understanding how this region can achieve long-term food security in the face of extreme challenges.

"We hope the stark predictions presented in this report will be a wake-up call to all -- farmers, extension agents, governments, aid organizations -- that we need to take a fundamentally different approach to farming."

Buffet said his foundation "promotes biologically-based conservation practices that improve soil quality and water use, while mitigating soil erosion and nutrient run-off. We can't completely stop the effects of climate change but we can significantly reduce its impact on farming by adopting these improved practices, which I use on my own farms in the U.S. and South Africa."

A copy of Tortillas on the Roaster is available on the Catholic Relief Services website.

The International Center for Tropical Agriculture is based near Cali, Colombia. It conducts research for sustainable and economically reliable development in tropical regions of Latin America, Africa and Asia.

The International Maize and Wheat Improvement Center, headquartered outside Mexico City, Mexico, is a not-for-profit agriculture research and training organization that maintains the world's largest maize and wheat seed bank

Catholic Relief Services is the official international humanitarian agency of the Catholic community in the United States.