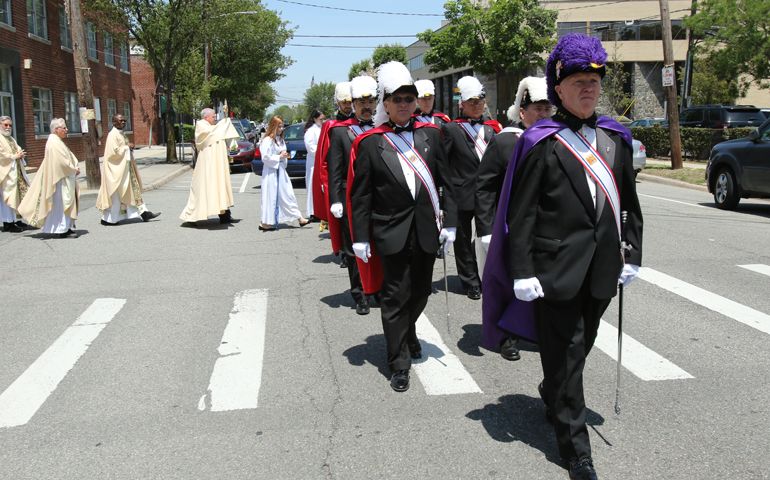 A Knights of Columbus honor guard leads a eucharistic procession on the feast of Corpus Christi in Corpus Christi Parish in Mineola, N.Y. (CNS/Gregory A. Shemitz)

Have you heard of "Battlefield Hardline"? It is a video game in which players pretend to be police who shoot people in urban areas. Common Sense Media named it among the top 10 most violent video games of 2015, the same year in which public awareness was rising about police brutality. It is also the same year that the video game's maker showed up as a top stock holding in a new Knights of Columbus mutual fund; a fund that is now being offered to employees of multiple Catholic institutions across the United States.

In March 2015, Knights officials announced the creation of a new subsidiary called the Knights of Columbus Asset Advisors. This new firm offers investment strategies tailored to Catholic institutions. As of the most recent annual report, there were 50 such clients ranging from dioceses to religious orders. In turn, these institutions may then offer Knights mutual funds to their employees as part of a retirement plan. In my own Chicago archdiocese, Catholic employees were given the option to invest in three Knights mutual funds with combined investments totaling more than $83 million as of April 2016.

While church workers may think they are investing in their own retirement, they may be investing against their best interest. There are three things church workers should know before they invest with the Knights of Columbus.

The Knights of Columbus Asset Advisors' website notes that the profits go back to the Knights organization, "a portion of which further funds Catholic initiatives." After repeated attempts to talk to the Knights Communications Department about where the profits went and what initiatives were being funded, no response was given by the deadline. Church workers deserve to know that Knights officials have repeatedly used the organization's resources to back political causes that go against church worker interests, including those of women working for Catholic institutions.

In recent years the organization has donated significant financial backing out of its "charitable contributions" to the Becket Fund for Religious Liberty, a Washington, D.C., law firm that has been arguing the case against equal access to contraception for women who work at Catholic institutions such as hospitals and universities. The Knights have also demonstrated that they agree with denying women church workers equal access, something that was a guarantee for other women under the Affordable Care Act. Knights officials also submitted an amicus brief that sided against women's fair access to contraception. With 80 percent of Catholic lay ministers being women, they deserve to know that the profits being made off their retirement investments may go toward political causes that don't support women's health.

Under the direction of Supreme Knight Carl Anderson, the Knights of Columbus has also played a significant political role in the movement against LGBT justice. For example, the organization funded anti-LGBT speakers for bishops through the National Catholic Bioethics Center. Additionally, Knights officials have repeatedly backed anti-LGBT political causes to the tune of $6.25 million, from 2005-2012 alone. The majority of Catholics support LGBT justice and many church workers are themselves gay, lesbian, bisexual or transgender. Church workers need to know that if they invest in these mutual funds, a portion of their money could be used against the LGBT community.

Church workers may assume that by investing in Knights of Columbus mutual funds that the stocks are in line with Catholic values. That is not always the case.

No company is perfect and, by extension, no stock is perfect. That is why the U.S. bishops' conference issued investment guidelines that encourage shareholder advocacy. This means that Catholic organizations holding stock should use the voting power that comes with it to encourage companies toward better business practices. The USCCB guidelines state that shareholders should help shape the company policies of the stocks they hold "through dialogue with management, through votes at corporate meetings, through the introduction of resolutions and through participation in investment decisions."

Shareholder advocacy permits Catholic organizations to hold stock in companies that may not fully adhere to Catholic social teaching, but that could be encouraged to improve their management and policies in that direction. For example, according to a semi-annual report in April, the Asset Advisors held stock in Electronic Arts, the company that produces "Battlefield Hardline," among other video games. If the Knights engage in shareholder advocacy, they could encourage Electronic Arts to modify or stop producing video games that contain extensive violence with negative social implications.

The Knights also held stock in Hershey, a company that has been known to have extensive child labor violations. If the Knights participate in shareholder advocacy, they could be part of the consumer movement working to hold the company to its promise to eliminate child labor by 2020. However, no shareholder advocacy is listed on the Knights' Asset Advisors website and the communications department did not respond to questions about it by the deadline.

Let me be clear that there is much to admire about the Knights of Columbus. The Knights I have known in my life are men dedicated to faith, fellowship and service. In fact, they might join me in questioning why shareholder engagement is not declared on the website and why Knights officials are spending resources on contentious political causes.

As someone who worked in the banking industry and passed the stock broker licensing exam, I am not naïve. I recognize that no mutual fund firm is perfect. But the Knights of Columbus Asset Advisors bill themselves as a Catholic firm. In fact, Supreme Knight Carl Anderson declared the organization not only a business, but a "Catholic enterprise" in the most recent annual report. As such, the Asset Advisors should be promoting the best interests of the church, including the interests of church workers. So far, that is not the case.