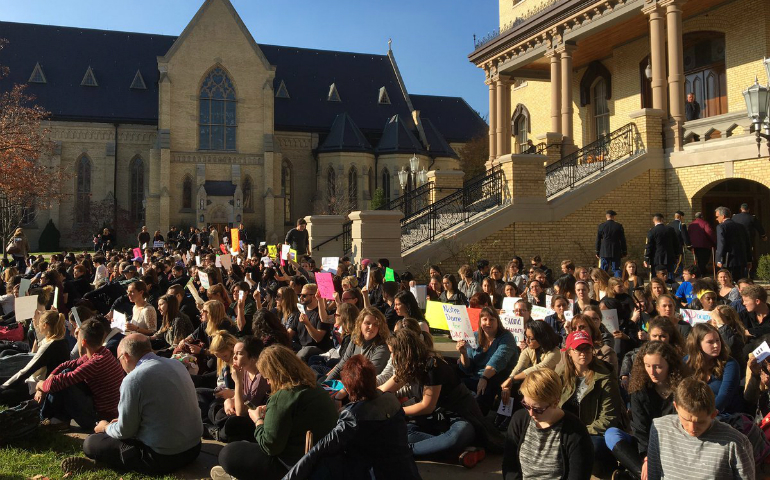 Notre Dame students participated in a sit-in Nov. 16 to urge the university president Holy Cross Fr. John Jenkins to designate the school as a "sanctuary campus." (Courtesy of Perin Gurel)

Activists at Notre Dame and in Philadelphia want to provide sanctuary from Trump deportations. On Monday night, Holy Cross Fr. John I. Jenkins, the president of the University of Notre Dame, spoke directly to the undocumented students on campus during a post-election interfaith prayer service for respect and solidarity. (Notre Dame started admitting undocumented immigrants in 2013.)

"I assure you of our special concern for you at this time," he said Nov. 14. "The university will spare no effort to support you, just as we will for every student at Notre Dame. You accepted our invitation to come to Notre Dame, you are now part of our family, and we will do everything we can to ensure you complete your education at Notre Dame."

Earlier that day, a group of Notre Dame faculty and students had come together to begin drafting a petition to Jenkins, urging him to designate the university as a "sanctuary campus" to protect students, faculty, staff, and their family members who might face imminent deportation due to policy changes promised by President-elect Donald Trump. Inspired by movements at other colleges and universities that have sprung up in the past week, advocates for sanctuary at Notre Dame planned to call on the school to refuse to cooperate with federal immigration authorities regarding potential deportations or raids, among other protective measures.

Dr. Jason Ruiz, an American studies professor at Notre Dame and the grandson of an undocumented Mexican immigrant himself, was one of the main architects of the petition. "Notre Dame already has a tremendously humane policy toward undocumented students. What the petition calls for is a concrete action plan," he told me in a phone conversation. "We are not asking Fr. Jenkins to transform his viewpoint or policies. What we're saying is, 'Your policies are great; we love them. We just want to see a strategic plan to deal with what lots of us fear.' "

By Tuesday afternoon, a link to the petition had started popping up all over my Facebook newsfeed, shared by dozens of my fellow Notre Dame alumni. It hit 4,300 signatures before the form was closed. Students delivered it to Jenkins during a campus-wide walkout on Wednesday. Ruiz says that Jenkins has already taken a prophetic political stand by choosing to admit undocumented students in the first place, and he hopes that the widespread support of the petition will embolden the administration even more.

"Our petition outperformed ones at much bigger schools because so much of our alumni base is interested in social justice and responds to a phrase like, 'our duty to protect the most vulnerable members of our community,' " Ruiz says. "It's one of the most beautiful things about the Notre Dame family. It's impossible to talk about sanctuary at Notre Dame without referencing the fact that we are a Catholic university."

The idea of forming sanctuary spaces to protect people from unjust punishment has biblical roots. In the book of Deuteronomy, as the Israelites approach the Promised Land, God instructs them to set up three "cities of refuge" to shelter those who had accidentally committed what we would call manslaughter today. The people are commanded to do this "so that the blood of an innocent person may not be shed in the land that the Lord your God is giving you as an inheritance" (19:10).

Pope Francis picked up on this tradition in 2015, when he opened the Vatican to several refugee families and called on every European parish, monastery, and shrine to do the same. "Faced with the tragedy of tens of thousands of refugees fleeing war, death, and hunger, who are on their way toward life's hope, the Gospel calls us to be near to the smallest and abandoned," he said.

Here in the United States, Catholic congregations and other communities of faith have been involved in various sanctuary movements for the protection of immigrant communities over the past few decades. The most visible element of these movements has been the literal housing of immigrants facing deportation in places of worship, protecting people from law enforcement authorities who are reluctant to conduct raids or arrests at churches. However, over the past 10 years or so, the "new sanctuary movement" has broadened and deepened its approach to fighting for immigrant justice.

The New Sanctuary Movement of Philadelphia (NSMOP), for instance, is one of the nation's most active coalitions and was instrumental in the designation of Philadelphia as a "sanctuary city" temporarily in 2014 and then again earlier this year under the direction of a new mayor. (What "sanctuary cities" do varies from place to place; the Philadelphia designation "bar[s] police and prison officials from telling ICE agents about an undocumented prisoner's pending release unless the person was convicted of a violent felony and ICE's request was supported by a warrant," per the Philadelphia Inquirer.)

Bringing together 19 congregations in the city — half of which are largely composed of immigrants — NSMOP works for pro-immigrant laws and policies, develops leaders to fight for justice within immigrant communities, and accompanies families facing deportation.

"We pair up a family or individual with a congregation, and that congregation stands in solidarity with them," says Peter Pedemonti, the director of NSMOP. "Members of the congregation will go to court with them, surrounding the person or family with community. It shows the court that people are watching. I think there's something powerful about bringing people of faith, a representation of God, into that place of power." Philadelphia's new sanctuary movement has won about 15 of these deportation cases, including some that seemed impossibly difficult, according to Pedemonti.

Since the presidential election, Pedemonti says NSMOP has been working to organize a "massive escalation" of an initiative they call sanctuary in the streets: If federal immigration authorities from Immigration and Customs Enforcement (ICE) arrive at someone's home for a raid, the individual or family is instructed to call a 24/7 hotline. In such emergency instances, there's no time to get a person to a congregation for sanctuary, Pedmonti says. "So we bring the congregation to them." Members of the initiative would show up at the site of the raid to pray, sing, and film what's happening.

Before Nov. 8, NSMOP had registered 65 people to participate in these acts of solidarity. Eight days into the campaign, they've added 850 names to the membership roll.

Pedemonti is worried that Philadelphia's status as a sanctuary city could be in jeopardy, as President-elect Trump has threatened to withhold all federal funding from cities with the designation.

"I have a 2-year-old and I want him growing up in a city that's welcoming and diverse," Pedemonti says. "Philadelphia grew for first time in 50 years according to the last census, which was largely due to immigrant communities. Sanctuary allows cities to grow and thrive. It helps us live our values of loving our neighbor and welcoming the stranger."

In this time of uncertainty and fear for immigrants and refugees in our country, the sanctuary movement is a tangible, active step our communities of faith can participate in, as these examples from Notre Dame and Philadelphia show. "We do this because of our faith. God is a God of justice, a God of the oppressed. When we're putting together our strategies, we need to remember that reality," Pedemonti says. "This time feels really dark, and it is the faith community that can offer a direction. We need to respond with more love, more compassion, bold action, and increase our light. When there's a gap between the law of the state and God's law, we can insert ourselves there to close that gap."