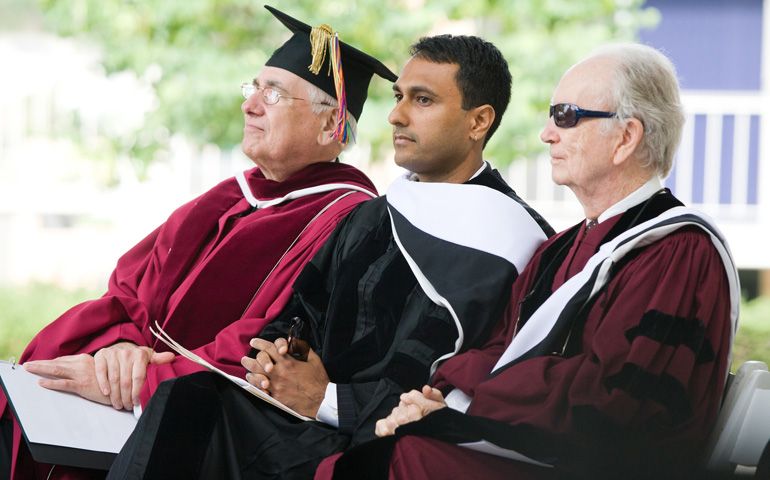 In September 2011, I wrote a Young Voices column for NCR on the opening of Claremont Lincoln University, the first graduate school owned by three Abrahamic faiths. On May 21, a modest audience gathered to celebrate CLU's inaugural commencement ceremony, honoring 10 CLU students alongside graduates of Claremont School of Theology. The ceremony began with a welcome from Dr. Jerry D. Campbell, founding president of CLU and the sixth president of Claremont School of Theology.

David Lincoln and Dr. Campbell were the visionaries for the groundbreaking interreligious university. Claremont Lincoln identifies as "the hub of a consortium of likeminded educational institutions and centers" that includes its founding partners: Claremont School of Theology; the Academy for Jewish Religion, California; Bayan Claremont (founded by the Islamic Center of Southern California); and affiliated schools and centers, including Center for Jain Studies; Center for Sikh Studies; Hindu Studies Program; and the University of the West (a Buddhist institution). At the end of June, Campbell will retire from the presidency of Claremont School of Theology to devote himself more fully to Claremont Lincoln University. The CST governing board has named Rev. Dr. Jeffrey Kuan, currently Dean of Drew University Theological School, to be the school’s seventh president.*

United Methodist Bishop Minerva Carcaño, the first Latina to be elected to the episcopacy of the second largest Protestant denomination, gave the invocation, and Dr. Tamar Frankiel, the president of the Academy of Jewish Religion, California, offered the final blessing.

Dr. Eboo Patel, founding president of the Interfaith Youth Core, received an honorary degree and gave the commencement speech, "On the Vanguard: A Celebration of Interfaith Leadership." Dr. Patel is a member of President Barack Obama's inaugural Advisory Council of the White House's Office of Faith-Based and Neighborhood Partnerships and holds a doctorate in sociology of religion from Oxford University, where he studied on a Rhodes scholarship. He is the author of the award-winning book Acts of Faith: The Story of an American Muslim, the Struggle for the Soul of a Generation; is a regular contributor to The Washington Post, NPR and CNN; and was named by US News & World Report as one of America's Best Leaders of 2009.

At the ceremony, Patel challenged the graduates to recognize that "the central problem interfaith work seeks to solve is this: How are all of us with our differences to share a nation and a world together?" This succinct goal stuck in my side as I thought about interreligious ceremonies I have experienced in the past. Sure, we offer prayers that allow us a window into one another's traditions and see beauty, but what about when we see something from another person with which we disagree? Are we truly inviting each other into a space that has enough tension to hold true difference?

With 15 years of experience as an interfaith leader, Patel talked about the value of interfaith relationships and dialogue as well as the challenges that come with committing to this worthy cause.

"The central task of an interfaith leader, in my view, is to help build relationships between people with profoundly different views of what is fundamental and what is just," he said. "How else do you have a diverse democracy unless people who have deep disagreements on some issues are able to work together on other issues?"

The graduates are now being sent to build relationships not only within their own faith traditions, but across religious communities. Patel challenged the graduates to do so with room for disagreement and tension.

"We need exceptional people who are able to hold the tensions here in a way that binds together rather than breaks apart, people who are willing to lead with their chin and take a punch," he said.

The promise of America that Patel describes in his most recent book, Sacred Ground: Pluralism, Prejudice, and the Promise of America, is pluralism. Patel explains prejudice as a challenge to the very idea of America and says pluralism is at the heart of the American project.

"The institutional expressions of religious identity are the engines of American civil society," he writes, recognizing that the civil rights movement not only helped dismantle racist policies in the domestic realm but also moved forward immigration reform. Patel suggests, later quoting Martin Luther King Jr., that the civil rights movement was not for the African-American dream, but rather, for "The American Dream, the dream of men of all races, creeds, national backgrounds, living together as brothers."

In the chapter "The Evangelical Shift," Patel writes of the two most prominent religious media stories in the early 2000s: Muslim extremism and clerical molestation in the Catholic church. During this time, Robert Putnam was surveying Americans' attitudes toward various religions, published in his book, American Grace. The survey revealed that generally, Catholics are viewed positively and as victims of the sex abuse scandal while generally, Muslims are viewed negatively, suspected as terrorists. Putnam theorized this was because of the friendship formed between evangelicals and Catholics in the past two centuries: People generally thought of their friend down the street when thinking of Catholics rather than calling to mind abusive clergy, while those same people would conjure images from a news report when hearing of Muslims.

"Not enough people report a positive relationship with a Muslim or appreciative knowledge of Islam to counter the negative representations they see on television," Patel writes.

Only two generations ago, Catholics were viewed as a domestic threat to the American Dream -- or, at the very least, were considered outsiders. Many of our Catholic institutions were built to educate or provide care for all, specifically Catholics who were rejected in mainstream institutions. As Catholics currently have such a favored place in society only two generations after such challenge, how might we create spaces for real relationships across religious differences in order to share a nation and a world together?

*An earlier version of this column incorrectly identified the presidents.

[April Gutierrez is a graduate of Boston College School the Theology and Ministry.]

Editor's note: We can send you an email alert every time a Young Voices column is posted. Go to this page and follow directions: Email alert sign-up.

'Us and them' still persists

Boredom has a lesson

Forgiveness goes above and beyond seventy-times-seven pardons

Throw out 'us vs. them'; we are all in this together