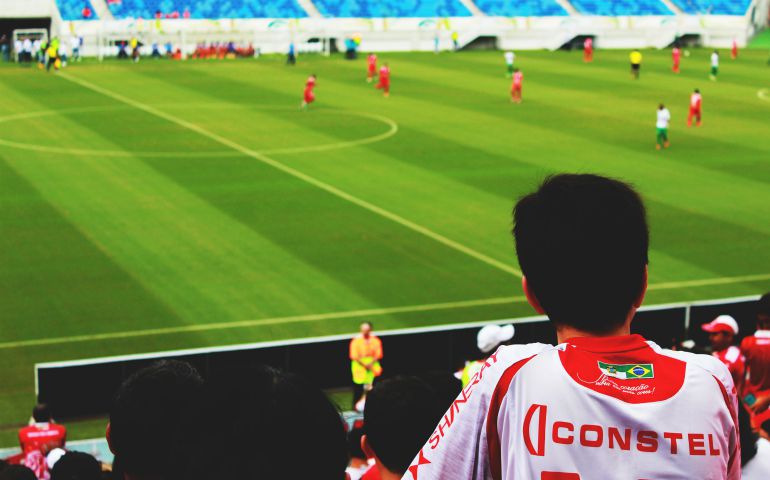 There is a pub near my apartment that serves as an unofficial sanctuary for soccer fanatics. The thought of joining these worshipers' ranks appeals to me for a number of reasons. Soccer has an exotic, foreign allure that football, basketball and golf lack. Nothing sings diehard commitment like rooting for Real Garcilaso, Manchester United or another team in some distant part of the world. The chants at soccer games are more creative, and the players' uniforms and haircuts are trendier. Supporting an international soccer team as an American is sort of like telling people your favorite band is Sigur Rós or Kraftwerk.

The problem is that I like the idea of following soccer much more than actually doing it. Soccer can be pretty boring to watch. For all the speed and action, much of the game is anticlimactic, ending with only a goal or two scored. While I enjoy the thought of devoting myself to a match in a time zone six hours ahead of mine, the truth is that I feel far more affinity for the Green Bay Packers and other hometown heroes.

I suspect it is fairly common to wish we liked something because of what we think it will say about us. The restaurants we check in at on Facebook, the comedians we retweet, the books and movies we list as favorites on our social media profiles — all these status symbols coalesce into a persona we project out to the world. While sheer enthusiasm for our latest interest surely motivates us some of the time, we also probably would not share these varying pieces of information unless we believed doing so sent some sort of message about the kind of person we hope others think we are.

This is not necessarily a bad thing. Gandhi, after all, advised people to "create and preserve the image of your choice," which sounds like an ahead-of-its-time command to foster a "personal brand."

Like many aspects of our increasingly online existences, however, there are drawbacks to carefully cultivating a public identity.

An obvious one is self-absorption and a misplaced sense of how much interest we think others ought to have in our passions and pursuits. Though modern technology affords amazing and novel ways to keep up with friends and family, the notion that anyone should care whether I like soccer is vain and inane. I cannot imagine any of my Facebook friends hungrily waiting for me to let them know what I ordered at brunch, and if they are, they need to seriously consider getting a life. Not every second needs to be documented and spread beyond the people who are present to witness it. It is fine to have private moments that exist for their own sake and not as another entry in our digital diaries.

This inclination to fashion a Facebook façade also has the potential to make us guilty of the worst slander one can endure in seventh grade: being a poser. Though no one is demanding I pledge allegiance to a soccer team or listen to a particular band, I doubt I am alone in sensing subtle social cues that indicate the kinds of materials I should consume or habits I should embrace if I want to emulate the athletes, artists, businesspeople, or "thought leaders" I should admire.*

Again, it is not bad to like something all the cool kids do or to adopt "life hacks" that work for others. It makes sense to learn from those who have found success in their lives and chosen fields. That said, we also ought to remember that anyone who lived a life worthy of praise probably did so by charting their own course.

People love Pope Francis for many reasons — his humility, his advocacy on behalf of people on the margins, his empathy for those living in complicated circumstances. The river I see running through all he says and does, however, is authenticity. When he washes refugees' feet or visits a prison, he is not just signaling to Christians how we should put our faith into practice. He is also revealing who he is as a pastor. Shopping for his own glasses and wearing orthopedic shoes might make for public relations gold, but one never gets the sense he is devising calculated marketing moves. He is doing what comes naturally to him. He is being himself.

Discovering and becoming oneself is challenging business. Many people spend years trying to sound like someone else before they can clear their throat and speak with their own voice.

But one's own voice and true self, is, as Mr. Rogers noted, "the greatest gift you ever give." Had Bruce Springsteen not transcended his tendency to walk after Bob Dylan, there would be no "Born to Run" or "Nebraska." Had St. Ignatius gone no further than trying to imitate St. Francis of Assisi, there might be no Society of Jesus.

"Find your own Calcutta," Mother Teresa once told a nun who wished to follow her footsteps.

"[T]o be a saint means to be myself," wrote Thomas Merton.

Or as David Starsky announced to a biker bar, "Don't pretend to be something you're not. Just be who you are … that's what's really cool."

* See, for example, the episode of "Seinfeld," in which Elaine is ostracized for hating "The English Patient," or a recent "Saturday Night Live" sketch about a man who didn't love "La La Land."