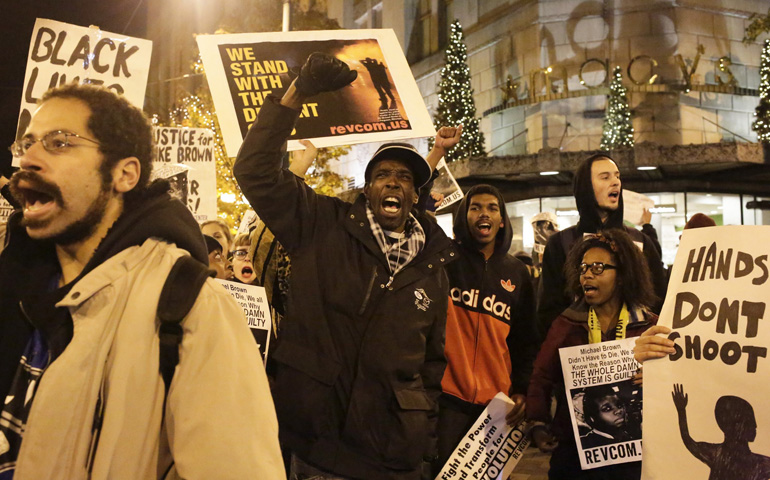 Demonstrators march through Seattle on Nov. 24, 2014, following a decision by a Missouri grand jury not to indict a white Ferguson police officer in the fatal shooting of Michael Brown. (CNS/Reuters/Jason Redmond)

We are all in the business of judging others, stacking the people we meet against an idealized or overly critical version of ourselves. Sometimes, this bears good fruit. We might empathize with someone after learning their burdens are heavier than our own.

Other comparisons are less helpful.

Our country is in the midst of a long-overdue, collective conversation about race. Though the most recent stories involving black men killed at the hands of police officers occurred in Baltimore and South Carolina, enough of these types of instances have occurred in enough places that it is hard to explain them away as isolated incidents.

Recent debates surrounding race have covered a number of topics, but one puzzling thread seeks to invalidate protests about racism with flawed comparisons.

For a relatively superficial example, take University of Kentucky basketball star Andrew Harrison muttering "F--- that n-----" about Wisconsin's Frank Kaminsky during this year's NCAA men's basketball tournament. Many people correctly pointed out that had Kaminsky, a white man, said the same about Harrison, a black man, the uproar would have been far more severe. The argument is that the same comment carries the same offense, regardless of who said it. Similar logic is cited when a black person kills a white person. Why, people ask, is this less noteworthy than Freddie Gray? Or Trayvon Martin? Or Michael Brown? Or Dontre Hamilton?

The problem with this line of thinking is that it ignores our place in a social story that began before we were here and will continue after we are gone. The violent death of a white person is no less tragic than that of a black person, but that does not mean the two have the same implication.

Those who believe civil rights milestones like the election of an African-American president meant the death of institutionalized racism ought to review the evidence. A recent study found African-Americans who graduate from elite universities have an equal shot in the job market as whites coming from less prestigious schools, while black graduates are typically offered lower starting salaries and less distinguished starting jobs. According to the NAACP, African-Americans represent 12 percent of the total drug-using population but 38 percent of people arrested for drug offenses and 59 percent of those in state prison on drug charges. Take all this, the slew of black men being cut down by bullets and countless other stats and anecdotes, and one begins to understand the narrative of an insidious racism bubbling to the surface.

While none of us may bear responsibility for the sins of slave owners and white supremacists, we all live in a country marked by their legacy. The point is not to demonize people who are not on the receiving end of this discrimination, but rather to recognize that my experience as a white man is not the same as that of an African-American or, for that matter, a police officer.

Instead of judging an African-American's account of being pulled over and questioned by police, instead of making grandiose claims about the way we would calmly handle protestors if we were police officers, perhaps we should listen. Perhaps we should consider that not undergoing something ourselves does not mean nobody else has. And when we do hear someone share an experience foreign to our own, perhaps listening will help us learn something new and continue taking steps, however small, toward becoming a more just society. Together.

[Brian Harper is a communications specialist for the Midwest Jesuits. You can read his work and listen to his music at brianharper.net.]