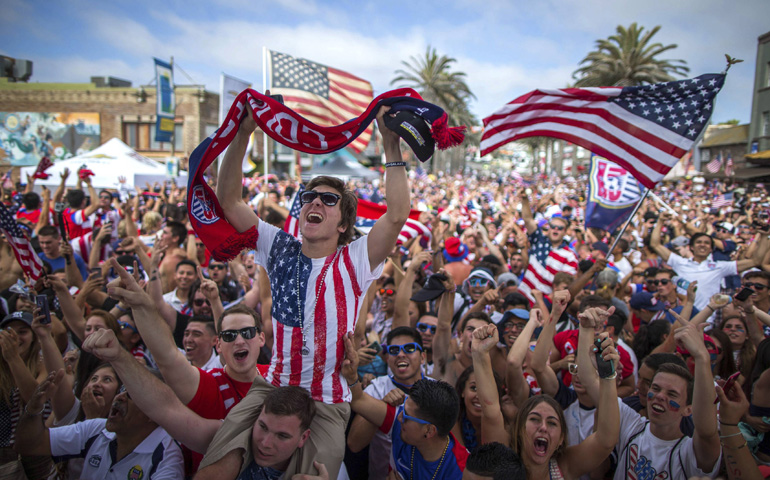 Fans cheer at a viewing party in Hermosa Beach, Calif., June 16, after the U.S. scored a second goal during the 2014 Brazil World Cup soccer match against Ghana. (CNS/Reuters/Lucy Nicholson)

I don't want to root for the United States in the World Cup.

I realized this in the car with my wife, Genevieve, on Sunday. We were listening to "Wait Wait ... Don't Tell Me!" on the radio, NPR's irreverent news quiz show, and host Peter Sagal joked about the tournament.

"Everybody in America instantly became a soccer fan on Monday after the U.S. defeated our archrival, Ghana," he said, which got a big laugh from the studio audience and a half-smile, half-grimace from Gen and me. African countries are global underdogs in practically every way. The idea that Ghana could be America's archrival in anything is hard to believe.

Sagal quickly interrupted the laughter. "No, this is true, this is true! Most Americans did not know that Ghana is legitimately our archrival in soccer. Most Americans didn't even know it was a country," he said. "Our best guess? Ghana is an STD. We're not a global-minded people is what I'm saying." Embarrassing, but accurate. I quizzed myself, and I can only pick out seven of the 54 African nations on an unlabeled map.

Then, later on, my friend Meg emailed me about being in Lesotho, a tiny country in southern Africa, when Ghana played the United States in the 2006 World Cup. "It's all anyone was talking about, and the radios and talk shows went on and on about how Ghana was the only hope for the continent," she wrote. "I felt like many more people in the world would care if Ghana won ... So I cheered for Ghana."

The reasons for rooting against the United States were gelling in my head: We already dominate in so many arenas, so let the rest of the world have soccer. Cheering for other countries could be a small way to atone for my nationalistic egocentrism. From a utilitarian perspective, the U.S. losing would mean the greatest excitement and joy for the greatest number of people, as our country's soccer apathy is well documented.

So on Sunday evening, I sat on the couch to watch the U.S.-Portugal game. The teams came onto the field and lined up for the playing of both national anthems, with the U.S. up first. And then I did something I've never done before: I sang "The Star-Spangled Banner" at the TV, along with the American fans and players in Brazil.

A couple of hours later, when the U.S. conceded a last-second goal and had to settle for a tie, I groaned and punched a pillow eight or 10 times. "I've never seen you react to sports like that before," Gen said. It's true -- I usually take sports disappointments pretty well. (As a Notre Dame football fan, I am very used to heartbreaking results.)

In my head, I don't want to root for the U.S. In my heart, I want our team to utterly thrash every country we face. I struggle with this contradiction off the soccer field, too. America frustrates, saddens and inspires me in so many ways, all at once.

No place is this tension more tangible than at the National Mall in Washington, D.C. During a recent visit, a couple of friends and I saw the monuments dedicated to Abraham Lincoln and Martin Luther King Jr. Pride and grief mingle at those memorials. You can't celebrate such heroic men without remembering the grave American injustices they laid down their lives to fight.

Lincoln and King clearly had a deep, mature love of country. In the face of slavery and segregation, more cynical men would have laughed off the nation's proclaimed ideals of "liberty and justice for all." They, however, called the nation to be better. They loved America enough to criticize it and to lead it in a new direction.

Even more than country, Lincoln and King loved humankind and resisted the manmade borders that divide us. In this way, they were true patriots from a Christian point of view. The word "patriot" is related to the Latin word pater, which means father -- it's the first word you say when you pray the Lord's Prayer in Latin. If a patriot is one with a deep devotion to his father's land, this has a double meaning for believers: my father's land is the United States, but my heavenly Father's land is the planet Earth. King's and Lincoln's belief that each person in the human race is made in the image and likeness of God compelled them to criticize their country when it fell so tragically short.

This is the sort of patriotism I aspire to emulate. For little things like the World Cup, a bit of patriotic fervor is probably harmless. But when it comes to big things like questions of peace and justice, the same love that caused me to sing the national anthem on the couch should nurture in me compassion for the whole world.