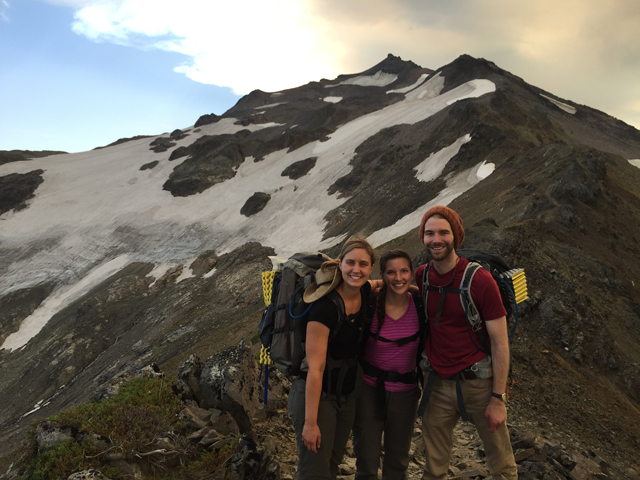 Brian Harper with friends on the Goat Rocks of the Pacific Crest Trail.

"I went to the woods because I wished to live deliberately, to front only the essential facts of life, and see if I could not learn what it had to teach, and not, when I came to die, discover that I had not lived." - Henry David Thoreau

An impulse to "suck out all the marrow of life" has driven many throughout the ages to nature. John the Baptist. Cheryl Strayed. Chris McCandless. Jesus. Call it a quest for spiritual awakening, a desire to escape the humdrum of the modern world, a search for a divine rendezvous in the wilderness or good, old-fashioned wanderlust. Certain souls seem hard-wired to cast out into the elements and, as John F. Kennedy said of the sea, to return "from whence we came."

Perhaps some of these lofty ideals were rattling around the back of my mind when I decided to join two community mates from my time in Peru with the Jesuit Volunteer Corps and hike a small section of the Pacific Crest Trail in Washington. In truth, my goals were slightly less romantic. I had long hoped to visit the Pacific Northwest, was eager to reconnect with old friends and could not help but jump at the chance to do my first serious hiking since leaving the Andes.

Given the sheer magnificence of our surroundings, it would have been impossible for us not to arrive at some nuggets of clarity and insight, however less profound than Thoreau's. Here are just a few of the thoughts I had in the wake of our 58-mile excursion:

Gratitude. There was much to be grateful for on our trek: the splendor of the trees, mountains, glacial lakes and skies surrounding us; time spent with loved ones in a fresh environment. But throughout the week, my appreciation began to sneak into less familiar corners. I felt thankful to the birds, meadows, bugs and dirt simply for being what they were, whether they were unequivocally good or less evidently so.

I started to consider the possibility of seeing all -- even pain and the challenges of cold, rainy nights and dwindling food supplies -- through a lens of gratitude. Stephen Colbert recently touched on this idea, that all life is manna, when reflecting on a J.R.R. Tolkien quote in the context of losing his father and two brothers in a plane crash. "What punishments of God are not gifts?" Colbert said in an interview with GQ. "So it would be ungrateful not to take everything with gratitude. It doesn't mean you want it. I can hold both of those ideas in my head."

You get what you need. Throughout our five-and-a-half days of hiking, we saw ominous smoke forming over Mount Adams, close to where we would end our trip. As conditions seemingly worsened around the middle of our journey, we retraced our steps, hoping to reach higher elevation and call a forest ranger. Unable to get phone reception, we considered turning back entirely, until other hikers crossed our path and provided crucial information: there was a fire, but it was on the other side of the mountain and would not affect the part of the trail we would walk.

It is no secret that life does not always -- or even often -- give us what we want. That week, there were moments when I would have liked to have been a lot warmer, had a lot more food or found a lot less trouble obtaining clean water. But somehow, my companions and I always arrived at the things we really, truly needed, when we needed them.

Presence. In our ever-apparent reality of smart phones and constant connection, many have commented on shortened attention spans and lack of availability to the people and places around us. While I am as guilty of this as anyone, a stretch without a computer, television or access to the Internet left me little choice but to pay attention.

What surprised me was that while I was enraptured by the spectacular scenery, I was also taken by the tiresome and downright dreary. On my final night of camping, a storm battered at my frail tent. As I lay in a sleeping bag, chilly and damp, reading "Walden" by flashlight, I felt as alive as I have in a long time. Stirred by Thoreau's prophetic words, I wrote in my journal, "I will remember this night more than a thousand nights of bland comfort at home."

There were other lessons -- the humbling reminder of how small I really am in the grand scheme coupled with the reassurance that every living being nevertheless has its role to play; the recognition that all too often, I wish my life away and fail to fully treasure these moments until they have passed. Mostly, though, I recalled a key truth: we live in an immensely breathtaking world.

As I returned to the rhythms of my daily life this week, my senses maybe just a little sharper, I continued encountering sights worth noticing, people worth meeting and experiences worth having. These, of course, are not only in the natural world; they are everywhere -- on a snow-capped mountaintop, inside a train car in Chicago, or even in a flimsy tent with a good book.

[Brian Harper is a communications specialist for the Midwest Jesuits. His writing has been featured in America magazine, the Milwaukee Journal Sentinel, NCR and various other publications. You can find his work at brianharper.net.]