Praying through the heights and valleys of human life 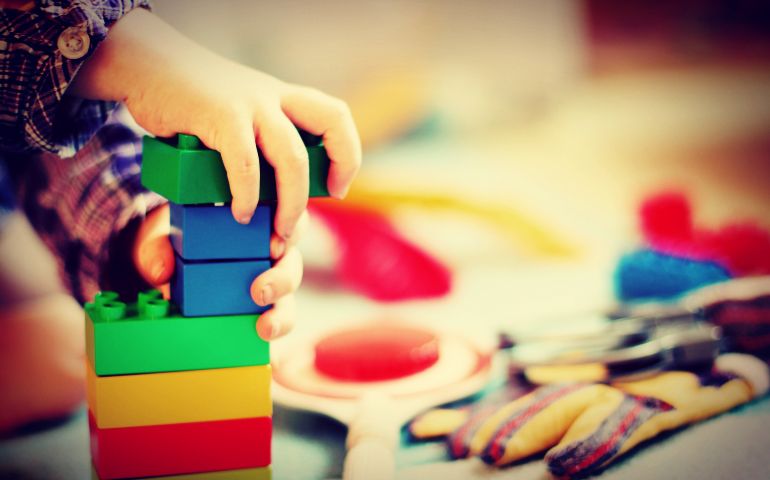 "They go out, they go out, full of tears, carrying seed for the sowing: they come back, they come back, full of song, carrying their sheaves." The lines of Psalm 126 arrive, regular and fixed, at 3:15 p.m. every day. I sit and recite them at a wooden table, built for children, in the now-empty classroom where moments ago I was tugging on jackets, separating quarrelers, hustling and cajoling 16 kindergartners out the door.

The children spend most of their day playing, but according to Italian educator Maria Montessori, what we call play is often a child's great work: their deepening attempts to acquaint themselves with and order their physical, intellectual and emotional worlds. That the children do emotional work over blocks and play dough is obvious: Alone, in partnerships, and in groups, each wrangles and returns to her particular theme.

For one, it is a paralyzing shame that cannot bear to be detected in wrongdoing. For another, it is the need to control pitted against the desire to collaborate. For another, it is an unfulfilled and therefore voracious need for love, in pursuit of which she will both seek out and repel her classmates.

I don't tell them. They wouldn't understand, and if they did, it would probably terrify them. Instead, I try to guide them toward methods that, hopefully, will shape their endless variations on the same theme into a harmony. And at the end of the school day, I sit alone and whisper, "They come back, full of song, carrying their sheaves."

The Liturgy of the Hours, or Divine Office, the daily recitation of particular psalms and canticles according to the liturgical year, is one of the oldest prayers of the church. In times past, it has unfolded over named hours of prayer throughout the day and night — Matins at midnight, Lauds at 3 a.m., then Prime, Terce, Sext, None, Vespers and, finally, Compline. The psalms could be found in thick, leather-bound breviaries, their order governed by a complicated set of rules it took time and effort to master.

Understandably, the combination of rigor and complexity proved too difficult for the average layperson, and thus, the Hours were prayed almost exclusively by clergy and monastics.

The Second Vatican Council overhauled the Hours, with the goal of making it more truly the prayer of the whole church, simplifying the structure and eliminating the midnight and 3 a.m. intervals. Today, the liturgy comprises longer morning and evening prayers, balanced by shorter prayers during the day and before bed.

The result is something modest enough for a layperson embroiled in the cares of the workday world to tackle. Indeed, the Office both shapes and is shaped by the workday: Each hour's psalms are not randomly assigned, but chosen according to the varying needs of the day's cycle.

The morning's prayers are full of hope and triumph, looking forward in confidence — "Shout with joy to the Rock who saves us" is the command that begins each new day. In the afternoon, I sit exhausted, and often discouraged, proclaiming a sometimes elusive trust in God who commands the seed to rise.

In the evening, work is put away. For better or worse, it is complete, and the psalms turn to restful trust and the fulfillment of promises. This is the hour of the Magnificat, Mary's wondering cry at what God has indeed accomplished through the lowly.

The humdrum struggle to eke out a living, with all its banalities, frustrations, failures and temporally bound aspirations, does not in itself bear the mark of a heroic spiritual endeavor. But praying the Office, with its consecration of each successive stage of the day and its particular obligations, elevates and transforms them.

The narrow repetitive circle of our own day is framed and enfolded by the great circle of the liturgical year, whose turns tell the story of how God entered time to redeem the world. Much of daily life is, on a grand scale, at least as trivial as children's play, but in providing a theater for recalling and retelling salvation history, the minutia of our lives become participants in a great work. God enters time immediately and intimately as well as historically.

If you stick with the Office, however imperfectly, you will notice its movement through the heights and valleys of human experience, brought to God with raw imploring directness. Shame and abjection, vindication, delight in blessings, pain and fury at betrayal, terror of death all take their turn.

The Liturgy of the Hours invites God not only into the daily temporality of a life, but into its scope and trajectory. The twists and turns a mortal life can take do not become simpler or less frightening through the praying of the Office — after all, one who rejoices at deliverance from the pit fears the pit above all else. Nevertheless, the reassurance "He brought me up from the pit of destruction" abides. It abides for the losses you cannot yet imagine being restored; it abides for the load you cannot bear another instant; it abides for the contingencies you cannot yet foresee.

At the end of another school day, I sit with a child I'll call Maria, who, however much she wants to, cannot seem to stop hurting herself or other children. I feel cursed by the pattern of her life I can already see unfolding before us. I know that my life has been inescapably shaped by the patterns others laid down, but Maria does not yet see hers: She is a child, a momentary paradox of possibility and dependence. In a few months, she will be carried out of my reach entirely.

In that moment, I feel crushed by patterns but, nevertheless, I know God is in them, that he delights in entering the ordinary and insufficient, in making our futile and inescapable wheels a part of his own redeeming cycle. They come back, they come full of song, carrying their sheaves: I believe it for Maria; I believe it for myself.

Spirituality | Praying through the heights and valleys of human life

Prayer, crying out to God is only source of salvation, pope says