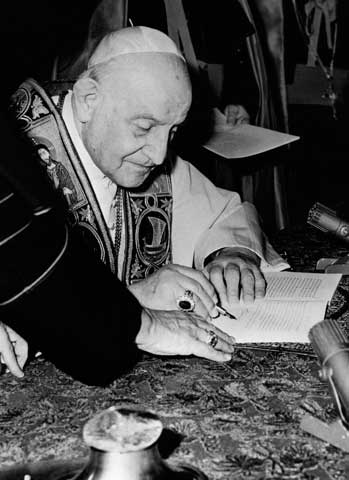 Pope John XXIII signs his encyclical Pacem in Terris at the Vatican in 1963. (CNS)

THE VISION OF CATHOLIC SOCIAL THOUGHT: THE VIRTUE OF SOLIDARITY AND THE PRAXIS OF HUMAN RIGHTS
By Meghan J. Clark
Published by Fortress Press, $39

Meghan Clark's new book, The Vision of Catholic Social Thought: The Virtue of Solidarity and the Praxis of Human Rights, accomplishes many things. Clark not only encapsulates some of the most important aspects and developments in recent church social teaching, she advances it into new territory and, most importantly, elucidates its foundations.

The canon of human rights, beginning with the adoption of the Universal Declaration of Human Rights in 1948, entered the discourse of the Catholic church with Pope John XXIII's encyclical Pacem in Terris, promulgated in 1963. But, given the different intellectual framework of traditional Catholic moral reasoning from the dominant liberal political philosophy from which that canon emerged, the Catholic approach to rights contained alternative emphases from the outset. Clark notes, "As is characteristic of Catholic ethics, [the rights enumerated by John XXIII] are contextualized within the community and linked to associated duties."

For Catholics, rights cannot remain abstract, individualized and exclusively Western. They are contextualized by the lived circumstances of people's lives, both as individuals and as a community. For example, the freedom of the press is a great thing, but not exactly a priority in countries where parents can't feed their children. It would be 20 years before the secular canon of human rights included socioeconomic rights like the right to development.

Later in the book, Clark brings the Catholic human rights tradition into dialogue with Nobel Prize-winning economist and philosopher Amartya Sen to highlight the similarities and differences between their perspectives. There is much mutual agreement, but the foundations are different.

"Catholic social thought locates the foundation for human rights in the view of the human person and community," Clark writes. "In contrast, Sen introduces a secular human rights theory that deals with both ethical distinctions through use of a Kantian philosophy and Adam Smith's economics."

Unsurprisingly, in Sen's thought, "community is relegated to an instrumental role." For Catholics, individual rights are always embedded in societal relationships and there they meet with the moral obligation of solidarity.

Clark notes that, in comparison with the clear development of Catholic ideas about human rights, solidarity has a fuzzier history. She writes that in the Second Vatican Council's Gaudium et Spes, solidarity is established as a concept far richer than the state, although the state is not excluded from its expression. After the council, Paul VI picked up the theme.

"Showing the deep influence of Catholic thinkers like Jacques Maritain, Paul VI is clear that development and solidarity are always both personal and communal; one cannot exist without the other in the common good," Clark writes.

With Pope John Paul II, personalism becomes a central philosophical construct of his three major social encyclicals. For him, the person is always a social being. Finally, with Pope Benedict XVI, the theological principle of caritas becomes the hermeneutical key for understanding and expressing solidarity.

Along the way, solidarity has been differently characterized in church teaching as "a feeling, an attitude, a duty, and, finally, a virtue." Clark's focus on solidarity as a virtue, especially when she contrasts it with the various opposite vices like "excessive individualism," is vitally important. At a time when libertarianism has legs on both the political left and right, the church's understanding of the virtue of solidarity is very much needed.

Clark also explains how the vision of Catholic social teaching requires a commitment to human rights that necessitates the virtue of solidarity. Unlike Sen's narrower, individualized understanding of human rights, Catholics believe that the existence of rights creates an obligation to not merely respect these rights in others, but to work for the social conditions that permit those rights to be meaningfully exercised.

The most important contribution of this book, however, is Clark's examination of the philosophical and theological anthropology that undergirds Catholic social teaching. In the face of conservative critics who question the value or binding nature of the church's teachings on social justice, Clark demonstrates that these teachings are founded on the very same principles that ground the church's teachings on human sexuality and the dignity of human life.

The human person is created in the image of God, but for the Christian, that God is Trinitarian. So, the imago dei is an imago trinitas. Human moral excellence, conceived as a private, personal, individualized achievement is not enough. The church teaches, and the Catholic is called, to imagine and work for a society in which the bonds of solidarity take as their standard the endless, ineffable self-giving love that is the Holy Trinity.

The Nicene Creed that we recite every Sunday does not mention any particular ethical claims. It does not proscribe abortion nor does it advocate the minimum wage. But, in Clark's rendering, all the teachings of the church are rooted in an understanding of the human person that is, in turn, rooted in the triune God we confess in the creed. This linkage has never been so concisely and ably demonstrated as Clark achieves here.

A version of this story appeared in the Jan 16-29, 2015 print issue under the headline: In the Trinity, author finds roots of Catholic human rights tradition.