Advocate for justice honors humanity of all 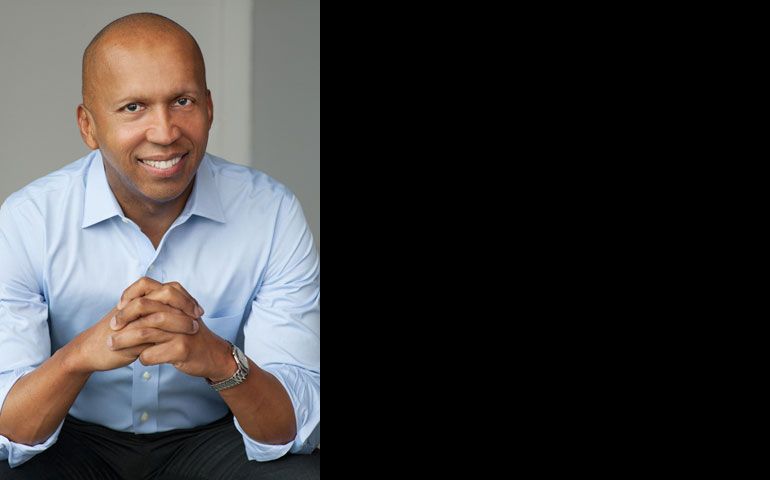 JUST MERCY: A STORY OF JUSTICE AND REDEMPTION
By Bryan Stevenson
Published by Spiegel and Grau, $28

In his affecting new memoir, Just Mercy, Bryan Stevenson recalls one night in the mid-1980s sitting in his car outside his Atlanta apartment as he listened to one of his favorite groups, Sly and the Family Stone, on the radio. The African-American attorney and recent Harvard Law School graduate then noticed a police car pull up.

When two officers emerged from their car and approached his, Stevenson got out, and a white officer pointed a gun at Stevenson and said, "Move and I'll blow your head off!" Then the other officer slammed Stevenson against his car.

After they asked Stevenson intimidating questions about why he was on this block and illegally searched his car, they determined Stevenson wasn't the suspect for whom they were on the lookout.

Recent events in Ferguson, Cleveland and New York starkly remind us that black males in the Unites States are born suspects, and Stevenson's Harvard Law degree doesn't exempt him from this reality.

Stevenson's experience informs his pursuit of racial justice as director of the Equal Justice Initiative in Montgomery, Ala., and makes him an empathetic and highly effective advocate for his clients.

The story of Stevenson's representation of Walter McMillian forms the core of Just Mercy. Some will recall McMillian's case, which came to national prominence in the 1990s. An African-American from Monroeville, Ala., he was falsely accused of murdering Ronda Morrison, an 18-year-old white woman. He was placed on death row in 1986 -- before being convicted of the crime.

Monroeville is also home to Harper Lee, whose To Kill a Mockingbird tells the story of an attorney seeking racial justice for a falsely accused black man in 1930s Alabama. More than 50 years later, McMillian's affair with a married white woman, Karen Kelly, crossed a line that African-Americans in Monroeville still didn't cross, and it was enough to lead local authorities to believe that he was guilty of Morrison's murder.

Although a dozen eyewitnesses provided McMillian a solid alibi, he was convicted largely based on the perjury of Ralph Myers. Implicated in another murder, Myers insisted that McMillian forced him to drive him to the cleaners where Morrison worked, and then killed her.

Readers will toggle between anger and incredulity as Stevenson recounts overcoming the racism and obstinacy of district attorneys and judges, the intimidation of a key witness, and bomb threats.

McMillian was released in 1993, after six and half years on death row.

McMillian's unjust prosecution is one egregious example, Stevenson contends, of the consequences of our society's embrace of mass incarceration. With 2.3 million persons incarcerated, the U.S. incarceration rate is the world's highest, which reflects, the author believes, our failed commitment to justice.

Evoking the plight and humanity of McMillian and other prisoners whose stories he tells in other chapters, Stevenson draws readers closer to the problem of mass incarceration. Reading about mentally ill offenders, poor women sentenced for murdering children they miscarried, and youthful offenders facing life sentences, you recognize the author's belief that "we all need mercy, we all need justice, and -- perhaps -- we all need some measure of unmerited grace."

One of the strengths of Just Mercy is the way Stevenson honors the humanity of those seemingly opposed to him. While defending death row prisoner Avery Jenkins, Stevenson encounters a white correctional officer with a bumper sticker on his truck that reads: "If I'd known it was going to be like this, I'd have picked my own damn cotton." During their first meeting, the guard goes against prison protocols and strip searches Stevenson. Stevenson describes the powerlessness he feels in the face of such humiliation.

The officer has a change of heart, however, when he accompanies Jenkins, who suffered great abuse in foster care, to a court hearing. The guard, who had his own negative foster care experiences, didn't realize that anyone could have had it bad as he did.

After the hearing, the guard tells Stevenson that he appreciated what he did for Jenkins, but acknowledged that he retains some anger about his foster care experience. The experience moves Stevenson to reflect, "I forget how we all need mitigation at some point."

That attitude is at the heart of Just Mercy, which is rooted in understanding that, as Stevenson writes, "being broken is what makes us human."

"We can embrace our humanness, which means embracing our broken natures and the compassion that remains our best hope for healing," he says. "Or we can deny our brokenness, forswear compassion, and, as a result, deny our humanity."

Embracing brokenness and compassion empowers us to live with just mercy. Before McMillian died in 2013, he taught the author that "mercy is just when it is rooted in hopefulness and freely given." That mercy, in Stevenson's view, empowers, liberates and transforms us.

Stevenson's vision will buoy readers of Just Mercy. This eloquent, urgent memoir shows readers what Alabamians have known since the 1990s: Bryan Stevenson is one of America's leading justice advocates.

[Chris Byrd has been involved in the movement to abolish the death penalty for 30 years, including four years in Texas, where he helped organize the Texans Against State Killing march in 1991.]

Justice | Advocate for justice honors humanity of all

Why was bishops' vote on Communion document secret?