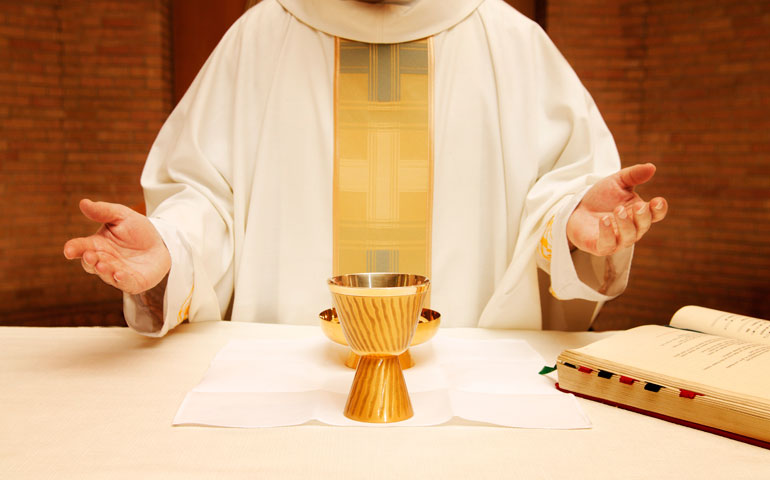 WHY PRIESTS?: A FAILED TRADITION
By Garry Wills
Published by Viking, $27.95

Somewhere between its printing and publication, the subtitle of Garry Wills’ Why Priests? was altered. The Real Meaning of the Eucharist became A Failed Tradition. We don’t know why the switch, but it highlights a tension within the text over how much the author wants to damage or reform the two interlocked systems at the heart of historical Christianity. Those systems are the sacramental presence of Christ in the Eucharist and the Catholic priesthood.

What is Wills trying to do?

Combining historical and literary analysis with journalistic observations on the present Catholic church, he is trying to deliver a blow to its guts followed by a right hook to the jaw to knock the church’s self-image to the mat.

To simply ask, “Why priests?” inevitably suggests that priests are not now and never have been really needed. The church he sees is a closed clique of clerics, a clique not grounded in the New Testament yet dominating the lives of millions, misleading them on the history of and the need for the sacraments, while dictating what the faithful may do and think.

Yes, the Epistles and Acts of the Apostles list various roles in the early church: bishops (overseers) and elders (preachers), but no priests. The structures, he writes, were “radically egalitarian and charismatic, not authoritarian or hierarchical.” It disturbs Wills that the most striking thing about priests is “their supposed ability to change bread and wine into the body and blood of Christ.” As a result, the people of God cannot approach God directly, but only through the mediating powers of the priest. This, Wills says, made it hard to discipline a pedophile priest; though deprived of permission to offer Mass, he still had the power. Other rules and customs -- the daily office, celibacy, the demanded deference -- isolated priests from their communities.

For Wills, the overstressed realism of Christ’s presence in the consecrated host has spawned aberrations of eucharistic piety, including “miraculous hosts” that bleed when stabbed or are carried in procession to ward off an enemy attack. It led to such aberrations as questions like: What if a spider drops into the wine? The answer: Catch, wash and burn the spider, then put the ashes and wash-water in the tabernacle.

Wills believes in the Eucharist, but not the church-approved philosophical rationalization: St. Thomas Aquinas’ theory of transubstantiation, Jesus present in the substance of the bread.

In centuries when the faithful rarely received Communion, the little host displayed in the gold monstrance overwhelmed the other presences of God -- in the congregation, in the Trinity, in the word -- and this “tiny white thing” became “a kind of benevolent kryptonite.” Wills proposes the teachings of St. Augustine, who claimed that what is changed in the Mass is not the bread given out but the believers receiving it. “This bread,” Augustine says, “makes clear how you should love your union with one another.” The French Jesuit Henri de Lubac held that the word “communion” originally referred to the union of the body of Christ and the people in the pews. De Lubac would also approve of Vatican II’s turning the altar around and offering the “kiss of peace.”

Why Priests? bogs down when Wills takes seven chapters to demonstrate that the title of priest does not belong to Jesus by discrediting the one book of the New Testament, the Epistle to the Hebrews, that does refer to Jesus several times as “a priest in the order of Melchizedek.”

Wills’ “failed tradition” of the subtitle may refer to either the lost concept of the Eucharist as the body of Christ in the community or to the lost egalitarianism of the original church. In his penultimate chapter, “Priestly Imperialism,” the seven sacraments, which were not instituted by Jesus but much later, become priestly power ploys.

“First,” Wills writes, “no one can be saved but the baptized.” Wrong! Has Wills not heard of Jesuit Fr. Leonard Feeney, who in the 1940s preached “no salvation outside the church” and was dismissed from the Jesuits? Or Karl Rahner’s “anonymous Christian” saved by his openness to God’s love?

Wills continues: Only priests can forgive sins, confect the Eucharist or confirm. The Eucharist, he contends, is not a sacrifice, but an eschatological meal like other meals and feedings in the Gospels. Later, as the priesthood developed and the Eucharist was seen less as a meal and more as a sacrifice, the community became less participants and more spectators.

And here we are today. Wills says he has nothing against priests; he spent five years as a Jesuit and lists priests he has admired. He still calls himself a Catholic, although he does not believe in popes, priests and sacraments. He believes central tenets such as the Trinity, prayer, Resurrection, creed and afterlife, but draws the line on priestly prerogatives, canonized saints, guardian angels, and Fatima. There he is far from alone.

He includes the Eucharist in the list of his beliefs. But on Ash Wednesday, appearing to plug this book on the Stephen Colbert comedy show -- a context that, with its audience hyped to laugh and scream at everything, does not lend itself to rational conversation -- he called the Eucharist a “fake.” He doesn’t use that word in the book, but that’s all his critics will remember, whether they ever read him or not.

I’ve read seven of Wills’ books and admire his contribution to critical journalism and the faith, but I found this book the least satisfying. That’s perhaps because he fails to answer many of the questions he raises. The sacraments, whatever their origins, give peace and comfort. In some future reform, they may be administered by all or many Christians.

Why Priests? should be required of all seminarians. They would dig into his sources and sources he has neglected and wrestle with and respond to his criticisms.

He concludes by quoting a University of Notre Dame professor who says Jesus did not institute the Eucharist at the Last Supper. Wills thinks he has led his reader to agree. I think Wills has not landed that knockout punch. He’s still dancing around the ring.