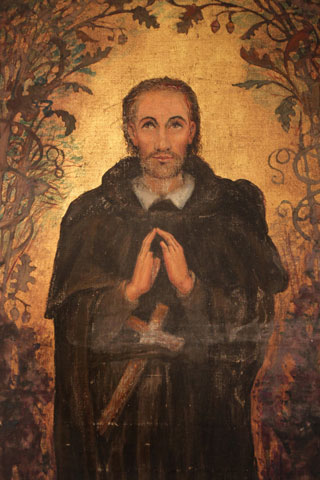 A portrait of St. Isaac Jogues at the Shrine of Our Lady of Martyrs in Auriesville, N.Y. (CNS/Nancy Wiechec)

THE DEATH AND AFTERLIFE OF THE NORTH AMERICAN MARTYRS
By Emma Anderson
Published by Harvard University Press, $39.95

My most vivid recollection from Blessed Sacrament School in Trenton, N.J., other than our eighth-grade Franciscan nun chewing us out, is the poster of a cluster of men in black robes, up front between the blackboard and the window. They were, of course, St. Isaac Jogues and his companions, and we had been inspired to admire them for their horrible deaths -- beat bloody in a naked run through the gauntlet, tortured, burned alive, fingers chewed off, hacked in the head with a tomahawk -- at the hands of savages they had come to "save."

When we were old enough to read, the delight was Jesuit Fr. Francis X. Talbot's classic Saint Among Savages on Jogues and his Saint Among the Hurons on Jean de Brébeuf. Talbot's blood-splattered pages put flesh on the ghosts of the so-called "first American saints." The mythology was in tune with the pop culture of our Saturday afternoon Westerns, where screaming "savages" galloped around the circled wagon trains, shooting their flaming arrows until the distant bugle announced the arrival of the U.S. cavalry.

That was then. Today, Canadian scholar Emma Anderson, in The Death and Afterlife of the North American Martyrs, has marshaled the weapons of the historian, anthropologist, archeologist, polemicist and journalist to demonstrate that the cult of the American martyrs is, to put it mildly, "politically incorrect."

She has visited four martyrs' shrines: the Canadian Jesuits' Midland Martyrs' Shrine and Sainte-Marie, where Brebeuf was buried (1649), in Ontario; the Jesuit shrine in Auriesville, N.Y., that commemorates Jogues' death (1646); and, 4 miles down the road, the Franciscan re-creation of Fonda, where Kateri Tekakwitha was baptized.

Anderson has dug through archives, walked a pilgrimage, interviewed directors and staff on their religious-cultural conflicts, and delivered a ringing indictment.

She raises questions on the nature of martyrdom; the politics of canonization, racism and sexism; and the propriety of displaying paintings where the descendants of Native American torturers must see their ancestors torment the stripped white bodies of saints tied to stakes. Shouldn't those paintings go to the basement? On the other hand, isn't torture a fact to be faced? Meanwhile, Anderson misses the key reason why the Jesuits felt obliged to baptize everybody, especially infants: In the theology of the day, all those not baptized would burn forever in hell.

Anderson also questions the interpretation of martyrdom. The tortures inflicted on the Jesuits were the same rituals inflicted on both enemies and fellow tribesmen, and the tribes had the custom of adopting a previous opponent into the tribe as a sort of spiritual replacement for a member lost.

The Iroquois debated long on whether they should adopt Jogues, but his personal habits -- isolation, mood changes, celibacy, and failure to adapt to tribal life -- alienated him. Some suggested offering him for ransom, others execution. An older warrior wanted to kill him; a young man argued for ransom. At that council, Jogues arrived and the warrior approached with his ax. The young man threw himself between the two and was wounded and knocked aside. The ax fell on Jogues' head. He had received the martyrdom he sought.

Years later, Jogues' killer converted and took Jogues' name, but the French with their aboriginal allies captured him and put him to death. The young wounded man was taken to France in 1649 and was baptized on his deathbed.

Anderson interviews two contemporary Canadian Jesuits who had just donated a precious relic, Brébeuf's half-skull, to a Canadian shrine. These Jesuits had little use for Jogues because his quirky mannerisms isolated him from the tribe and he actively sought martyrdom.

The American 19th-century church promoted these "American" martyrs so that immigrant Catholics might be perceived more readily as "real" Americans, even though these men were French and half of them died in Canada. Nevertheless, from the 1890s until his death in 1948, the martyrs' most zealous promoter was Jesuit Fr. John Wynne, also the first editor of America and the Catholic Encyclopedia. His Catholic patriotism moved him to describe all eight martyrs as "Americans." They were canonized in 1930.

In 1949, Jesuit showman Daniel Lord turned his talents to Cold War propaganda and produced a pageant where in Act I the "savage" red men danced around and slew the Jesuits, then in Act II soldiers wearing red marched in carrying rifles to kill the Christians.

The 20th-century Jesuits split in their attitudes toward these devotions. In general, the Canadians were more open to toning down the violence and reaching out to native converts. Meanwhile, the shrine at Auriesville, built -- on the basis of little evidence -- on the supposed site of Ossernenon, the village where Jogues and René Goupil were killed, for many years welcomed busloads to its coliseum church. But Anderson describes some recent directors as clueless when asked about the alienated Native Americans and fading attendance.

Interviewing the "ultraconservative" members of the National Coalition of Clergy and Laity on their 2010 Pilgrimage for Restoration from Lake George to Auriesville, she finds them "confrontational," many echoing their director's lament that Catholic men had become "weenies." It was as if the lines are being drawn for another culture war.

If so, Anderson's book may be too long and repetitious, and that so many interviewees would not use their real names does not speak well for the atmosphere on shrine staffs. But this is an important book, and church leaders should take it seriously and rethink some of their policies -- particularly on martyrdom, racism, and mixed religious celebrations and liturgies.

I have visited Auriesville twice. Once for a two-week novice "trial" during which we served the retreat house by making priest-retreatants' beds and addressing the rector's Christmas cards. About eight years ago, the retreat house was sold a Buddhist organization. In 2006, preparing to write my book The American Jesuits: A History and with the hope of inhaling some inspiration, I walked alone down through the woods to the stream near which Jogues allegedly buried Goupil.

Whatever the future of the shrine may be, as the religious mindset and popular culture that nourished it fade, the valid wealth of the property will be the Jesuit graveyard. There, maybe not martyrs, but surely saints, rest as we remaining non-martyrs work on in hope that we will be worthy to join them.

[Jesuit Fr. Raymond A. Schroth is the literary editor of America.]

A version of this story appeared in the May 23-June 5, 2014 print issue under the headline: Racism, martyrdom and mythology.