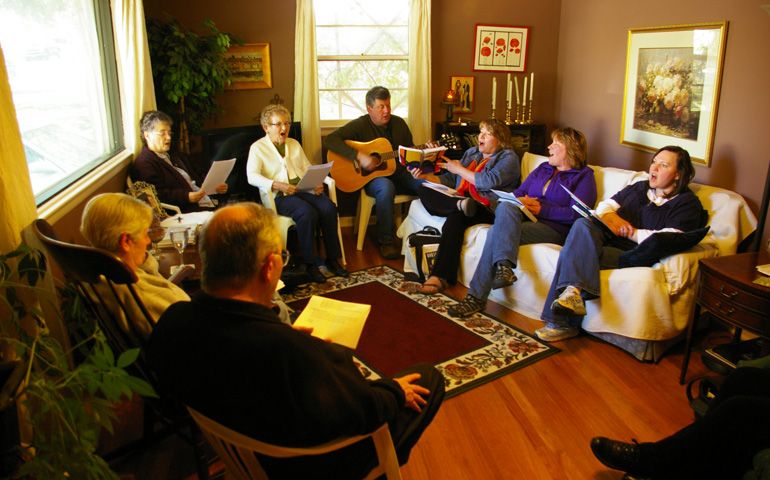 Members of the Lincoln, Neb., Call to Action group sing during a prayer liturgy during their Oct. 7, 2012, meeting at the home of Rachel Pokora. (NCR photo/Joshua J. McElwee)

CRISIS OF CATHOLIC AUTHORITY: FAITH AND POWER IN THE DIOCESE OF LINCOLN, NEBRASKA
By Rachel Pokora
Published by Paragon House, $19.95

Crisis of Catholic Authority is a kind of ecclesiastical horror story. It relates what can happen when an autocratic hierarch chooses to exercise his supreme, punitive power over some of his subjects. No one on this earth will restrain him, neither the priests of his diocese, nor his fellow bishops in the U.S., nor the high authorities in Rome, not even the pope himself. And like some ancient gothic curse, this awesome penalty has acquired a life of its own, continuing in full force for 18 years, outliving the resignation of the bishop who pronounced it, still in effect to this day and into the foreseeable future.

The bishop is Fabian Bruskewitz, who ruled the diocese of Lincoln, Neb., from 1992 to 2012. Those immediately affected by excommunication in 1996 were some 45 members of the Nebraska chapter of the Call to Action organization who happened to live in the Lincoln diocese. They were given one month to resign from the accursed group, at which time the penalty would automatically go into effect. Also presumably affected were any other Call to Action members who would move to Lincoln in the future without renouncing their membership.

It should be noted that no other U.S. bishop has followed Bruskewitz's lead in all these years, though the bishop himself has become a kind of folk hero to supporters of Mother Angelica's EWTN television station and other far-right conservative Catholic organizations.

Author Rachel Pokora narrates the story clearly, without rancor or bitterness. She is a professor of communications at Nebraska Wesleyan University who moved to Lincoln after Bruskewitz struck. She chose to join CTA's Nebraska chapter after experiencing the rigidity and extreme conservatism that marked parish life in the diocese, and she later served for several years as the chapter's president.

"Within a month in Lincoln, I had attended three different churches," she recalls. "Mass felt lifeless to me. I was struck by the authoritarian attitudes conveyed in the homilies. I lost track of how many times I felt angry during Mass and how many times I held back tears."

Pokora goes to some lengths (almost half the book) to supply the backstory to this tale of frustration, sorrow and fortitude. Bruskewitz's predecessor, Glennon Flavin, himself a hard-nosed conservative, was appointed to Lincoln in 1967, less than two years after the Second Vatican Council ended. He showed no enthusiasm for the changes that came from the council and a deep abhorrence for dissent of any kind. Flavin would reportedly not talk to inquirers in person or on the phone, would not respond to mail and would not cooperate with the press.

In 1981, representatives from seven Lincoln parishes formed a group called Catholics for Active Liturgical Life (CALL) in response to Flavin's decision to allow only "instituted lectors and acolytes" (that is, men and boys only) to read the Scriptures and serve at the altar at Mass.

Flavin ignored the group for 12 years, as its members appealed to him, the diocesan priests and the members of the National Conference of Catholic Bishops for some kind of resolution. Nothing came of it. In 1984, Los Angeles Archbishop Roger Mahony, head of the bishops' arbitration committee, had attempted to help, only to tell CALL leaders after several months that Flavin "declined to participate in our conciliation process."

When Bruskewitz arrived, Lincoln Catholics found him very different from Flavin. He did not ignore the media, but he exhibited a biting, caustic tone more dismissive and accusatory than anything that that had come from his predecessor. At one point, Bruskewitz agreed to meet with CALL leaders, on the condition they read three far-right, inflammatory books ahead of time, including Ungodly Rage: The Hidden Face of Catholic Feminism. CALL members complied, but then Bruskewitz canceled the meeting. Nevertheless, he soon lifted the ban against women lectors.

With some satisfaction that a major goal had been achieved, CALL disbanded in 1993. Veteran members, along with like-minded Catholics from the Omaha, Neb., archdiocese later decided to join Call to Action, the largest Catholic reform organization in the U.S. Unlike CALL, CTA advocated major structural change, including participation of laity in the selection of bishops, and opening the priesthood to women and married men. Among CTA's members were several dozen priests and a few bishops.

In March 1996, the new organization, Call to Action Nebraska, informed the state's bishops of their existence. Bruskewitz's quick reply began, "A priest friend of mine who used to be a Protestant minister said that the difference between a dissenting Catholic and a Protestant is that the Protestant has integrity." He urged the writers to tell their followers that "membership constitutes a grave act of disrespect and disobedience to their lawful bishop."

Two days later came the climax -- a surprise article in the Lincoln diocesan paper that announced, "Any Catholics in and of the diocese of Lincoln who attain or retain membership in any of the above listed organizations are, by that very fact, under interdict and are absolutely forbidden to receive Holy Communion." Should they continue "contumacious persistence" in such membership for one more month, they would be, by that very fact, excommunicated. Absolution from such sin was reserved to the bishop. Twelve organizations were listed, including Planned Parenthood, the Freemasons, Eastern Star and even the Rainbow Girls, but it was patently clear that Call to Action was the major target.

The story immediately went viral. Reporters from all over the U.S. homed in on Lincoln, revealing the alarm, anger and general confusion of the public. Pokora does a fine job of covering reactions from press, clergy and laity. Many observers thought this was an unfortunate gaffe that would be quickly settled, as cooler heads, especially among the bishop's episcopal colleagues, intervened. No such intervention was undertaken, and no bishop publicly reprimanded Bruskewitz for failure to present specific charges or give the accused an opportunity to reply.

Though some church authorities (including Fr. James Coriden, a noted canon law expert) declared the excommunication invalid on its face, the still embattled 50 or so members of CTA in Lincoln forged on in the name of justice. The leader, until his untimely death in 2013, was Jim McShane, a retired college professor with a heightened sensitivity to injustice. What he wanted was a hearing, a day in court. He did not get it.

Pokora recounts the details of appeals that were carefully prepared and sent between 1996 and 2007 -- to Bruskewitz, then to a wide swath of experts, including the U.S. Conference of Catholic Bishops and the Vatican's Apostolic Signatura. Though Bruskewitz announced at one point that a Roman congregation had rejected CTA Nebraska's appeal, neither he nor anyone else would provide an official document asserting that as fact. And so the excommunication endures.

[Robert McClory is professor emeritus of journalism at Northwestern University, and has contributed to NCR since 1974.]