Faith in the streets 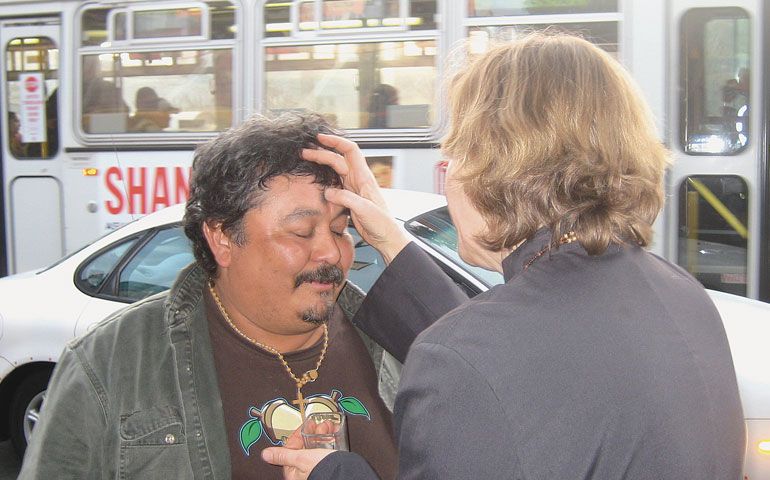 Author Sara Miles distributes ashes on a sidewalk in San Francisco on Ash Wednesday in 2010, the year the tradition began. (Claire Blackstock)

CITY OF GOD: FAITH IN THE STREETS
By Sara Miles
Published by Jericho Books, $20

Readers of Take This Bread or Jesus Freak are prepared for this new Sara Miles memoir. As do those previous books, City of God will provoke, inspire and challenge anyone who claims to be a Christian. Its core narrative, with much autobiographical detail appended, centers on Ash Wednesday 2012, when Miles, a lay pastoral minister at St. Gregory of Nyssa Episcopal Church in San Francisco, takes the ritual of the imposition of ashes to the streets of the Mission District and the welter of people who live there. There is nothing pious about Miles. She understands the messiness of the human condition and captures it in scintillating prose and apt metaphor. She is unorthodox, iconoclastic, funny, humble and deadly serious all at once.

While cognizant of declining church membership, especially in a secular city like San Francisco, Miles continues to appreciate the importance of liturgical ritual. She is nonetheless fully aware of the underside of institutional religion that can be unimaginative, judgmental, small-minded and arrogant. In order to overcome these limitations, she believes liturgy must move to where people are, beyond congregational walls to the streets of the city. Overcoming the dualism of Augustine, she claims that there in the gritty, fractured, jumble of the city "heaven and earth are revealed as a part of a continuum."

Her underlying premise is that religion is not so much about belief in doctrine or right behavior, as about hunger and desire for abundant life. In Take This Bread, she recounts how her own hunger was met and nurtured by the Eucharist, and how she was impelled subsequently to feed the hungry of the city. In City of God, she explores the hunger to be forgiven and reborn through a reminder that no one escapes death. On Ash Wednesday of 2012, Miles spent the day offering morning and evening services at St. Gregory's, and in the afternoon she and several others walked the plaza and streets of the Mission offering ashes to anyone who asked to receive them. Many came forth, and in those brief, intense anointings there was a meeting, an encounter during which "God's presence flared out." Here was an experience of something true that prompted a need for personal change. "Remember that you are dust and unto dust you shall return," she repeated again and again, sometimes in English, other times in Spanish. From those who received the black marking was elicited "Thank you," gratitude for a moment in which time was overcome and eternity experienced.

It was only reluctantly that Miles, dressed in a black cassock with ashes in hand, walked the noisy, teeming streets of the Mission when this tradition began in 2010. After all, she knew she would meet those who would recognize her. She realized, too, that others might see her as one among other crazies out there calling for people to repent. And did not Scripture say one was to pray in secret and not make a public spectacle of oneself? But as she anointed the cruciform symbol on the foreheads of all manner of humanity, she gained strength from these heightened encounters and the responsiveness of people. She understood that critics might argue that she had taken a church ritual out of its full liturgical context. They might question what one brief, poorly understood marking with ashes might mean for unchurched people. But it was Miles' faith that grace would be provided much as it had been for her, that God's mercy unending and for all humanity.

Take This Bread is the story of Miles' coming to the Eucharist. City of God is about her taking the ashes of repentance to the city. The fact that the two stories are not equivalent helps explain in part why the latter is not as compelling as the former. Ash Wednesday is not the same as Holy Thursday. As well, City of God has a diffuse quality. The narrative is sometimes confusing as Miles moves back and forth between vignettes from her personal and community life and the events of Ash Wednesday. It is not always clear how the former are related to the central story line or why they were included. Nonetheless, City of God is a heartening, inspirational story that affirms a life-giving theology. For Miles, faith proceeds from life itself; it "is an extension of real life." Faith is not derived from assent to doctrine nor is it a reward for good deeds. Because it originates from life itself, faith is always communal. As she asserts, one cannot be a Christian by oneself. She sides with the psalmist who suggests that God shows love to those in a "besieged city," and she asks: Must not people of faith do the same?

[Dana Greene's most recent book is Denise Levertov: A Poet's Life. She serves on the board of the Shalem Institute for Spiritual Formation in Washington, D.C.]

Parish | Faith in the streets

The US all-volunteer military system is unjust