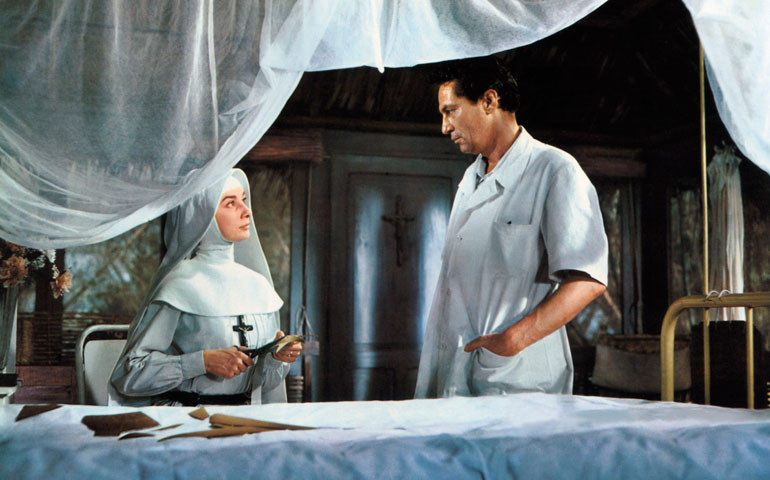 Sometimes there can be a sacramental quality about cinema. When movies tell stories well, they become outward manifestations that transcend the inner realities of their characters in ways that touch the audience. Maureen Sabine has written a masterful book that reveals the sacramentality of cinema about religious women. She is confident of her topic and her analysis, and has found something worth saying even about films that I don't care for very much.

In the author's own words, Veiled Desires: Intimate Portrayals of Nuns in Postwar Anglo-American Film aims "to change the way nuns are seen onscreen by probing the stereotypes in which they have been immured and by considering how these women religious figures came to capture the popular imagination."

I am not sure she has succeeded in changing the way nuns are seen on screen, as this will depend on the viewer taking the time to tussle with the dominance of kitsch and stereotyping of nuns in the general culture. In addition, appreciating this book will require as much intentionality as the author has given her subject in order to consider the many ideas, layered analysis, interpretations and conclusions in this intriguing tome -- while savoring it at the same time.

Sabine, a history professor at the University of Hong Kong, knows her cinematic sisters intimately. She understands, though she does not articulate until deep into the book, that all of the films she deals with have been "shaped by the vision of male directors" and some scenes suggest the "male enchantment with the mystique of the cloister."

The key films about sisters that Sabine chose for her thesis are:

Then the author brings in films that at first glance seem to have nothing to do with sisters but serve to contrast the themes of her book, especially the dualism, tension and fecundity of eros and agape at work in the lives of cinema sisters as well as in real life. These films are:

Eros and agape form the most important lens pairing that frames her analysis. She uses Audre Lorde's definition of eros as a life force, "the core longings that make us most fully human: for fulfilling work, for the creation and celebration of beauty, for intellectual and spiritual pursuits, for the enjoyment of friendship, love, connection, and intimacy. ... A life force that stands in opposition to dehumanizing pornography." The author turns to Anders Nygren for a description of agape as a loving and "wholehearted surrender to God," an unconditional obedience, given without reservation, and a "conversion or change of heart" in which God awakens love in the person.

Thus, Sabine's point of departure for her analysis is the nun as a whole person, and that "spirituality and sexuality are interrelated forms of self-expression." To separate these when considering the image of women religious in film would be to create another duality: spiritual nuns as successful and nuns who fail as, well, bad. And this does happen in the stories of nuns on screen.

It is useless to bemoan the fact that Sabine only barely mentions "The Trouble With Angels" in the book, a movie that influenced my decision to enter the convent very much. Or that she decides early on not to include "The Song of Bernadette" in her analysis, when the film has the best line in the history of nuns on the screen. An elderly nun cannot understand why Mary chose to appear to the lowly Bernadette and exclaims in tortured voice, "My eyes, they burn with the very fires of hell" and Mary chose ... you? It's a classic line that still sends us into peals of laughter but that nun deserves some deep Freudian analysis that Sabine applies to almost all the screen nuns she looks at.

As Sabine was finishing her book, the documentary "God Is the Bigger Elvis" was nominated for an Oscar in the short documentary category. It was good timing because Mother Dolores Hart, former Hollywood starlet who became a Benedictine nun, is grounded and speaks wise words about her vowed life and loving her former fiancé until his death as being totally consistent. Another sister in the film states that nuns are sexual beings and that they express their sexuality in their bodies, but through their voices, through sacred chant, rather than genitally. This is pretty much what Sabine is getting at as she scrutinizes cinematic sisters, even though they are created by the vision of male directors.

Sabine affirms that nuns, religious sisters, are interesting, and I think she finds author Rumer Godden's nuns the most remarkable of all in "Black Narcissus" and "In This House of Brede." This is what Sabine does best: She pulls from her literary knowledge, psychology, and the history of religious life before and after the Second Vatican Council, and manages to articulate great insight into mediocre movies made from great novels.

She saves her greatest appreciation for "Dead Man Walking" because it expresses the entwined dualism of eros and agape so distinctly. She then laments the representation of nuns in "Doubt." With cinema nuns having come so far, Sabine thinks that Meryl Streep's character is never fully realized and instead assumes the role of patriarch in a female community just as feminism emerges in the culture without and within the convent.

If there is one thing I wish the author might have expressed at the outset is that apostolic religious life only existed by exemption from the monastic life until the revised Code of Canon Law was approved in 1983. Thus, many apostolic communities of sisters struggled between fidelity to a schedule and commitment to the apostolate, and Sister Luke's pre-Vatican II inner turmoil, combined with her complex range of desires in "The Nun's Story," is a reflection of this.

As a woman religious for almost 47 years, I think Veiled Desires is a great read and the selection of films would make for an awesome retrospective film festival. As I read, I revisited my experiences in my community that resisted most prevailing changes in religious life for a long time, until our new constitutions were approved in 1984. And I watched in my mind's eye my own spiritual journey within my community, checking in with the stories of my cinematic sisters as I went along, guided by Sabine. Brava, professor. Well done. A novice director, in particular, would do well to relish your book.

After reading Veiled Desires: Intimate Portrayals of Nuns in Postwar Anglo-American Film, I had questions, so I emailed them to author Maureen A. Sabine. Below are some excerpts from our exchange.

NCR: Were you ever in religious life? Did you/do you know many sisters?
Sabine: No, but I had a Catholic education and was taught by sisters for 12 years, first the Dominicans in grade school and then the Ursulines in high school. They were gifted educators whom I admired and loved for their strong faith, dedication and devotion to their students, sense of fulfillment, joy and energy. Though I did not realize it at the time, they were holistic role models -- not only of feminist professionalism and academic excellence, but of holiness and centeredness. They instilled an ethic of hard and meaningful work, of social conscience, and of responsibility to develop one's talents not only for a life of purpose but of service to others.

What inspired you to take on this formidable topic?
My personal admiration for nuns was definitely a factor ... but it was also sparked by my interest in Fred Zinnemann's film "The Nun's Story," which feminist cultural critics have tended to dismiss. Zinnemann is a favorite film director and his film interest in closed communities and total institutions, the seduction of surrender to domination, authoritarian rule and the party line, the individual's struggle to resist social conformity and institutionalization, and the personal cost of resisting this and following the dictates of the conscience resonates strongly with me, not least because being a Catholic and pursuing my lifelong research interest in religion and spirituality in a secular academic context has not always been easy, and has certainly not been trendy.

Your interdisciplinary approach is very rich. And you have a turn of phrase every once in a while that transcends the academic to the literary, for example when you wrote about Sister Luke in "The Nun's Story": That which is part of one's internal world can never be gone. Can you comment?
The writing was very important to me. I wanted to write clearly and in an informed way but from the heart as well. My Ph.D. was on the metaphysical poets. My appreciation for poetry makes me conscious of the power of words. You could say that I aimed on a modest and minor scale for what Keats called beauty and truth.

I also liked a sentence I just read in your section on "Doubt": "The nun [Amy Adams] realizes the spiritual temptation implicit in the Church's patriarchal bargain with women religious -- of gaining control through the loss of empathy." Very astute and real. That you were able to realize this through watching movies and integrating their meaning with your academic background is rather amazing. There is an aura of deep contemplation here. Can you comment?
The critiques were often slow coming, and required me to carry the films and the characters around in my head. I often had to wait. I tell my graduate students when they start their thesis that writing is a kind of death and resurrection. Nuns are right, I think, to see meaningful work as a form of prayer.

A version of this story appeared in the Feb 14-27, 2014 print issue under the headline: The inner realities of cinematic sisters.