The long shadow of the martyr myth 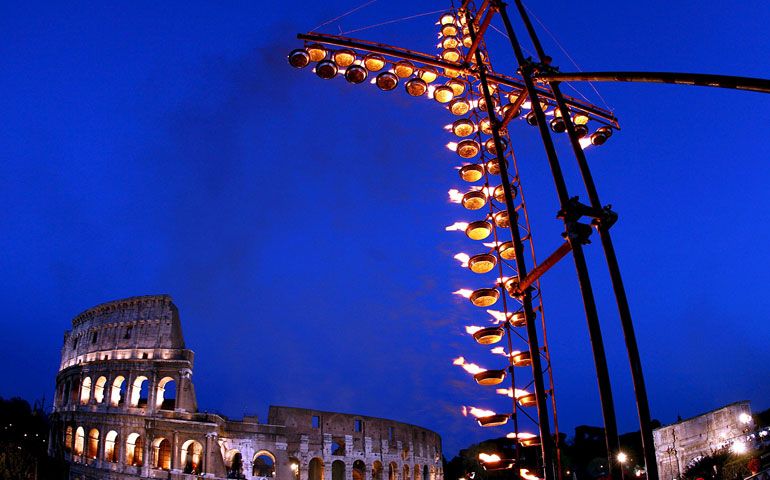 A cross of flames overlooks the ancient Roman Colosseum, believed to be a site of early Christian martyrdom, at the start of the Way of the Cross led by Pope Benedict XVI on Good Friday in 2006. (Newscom/EPA/Ettore Ferrari)

THE MYTH OF PERSECUTION: HOW EARLY CHRISTIANS INVENTED A STORY OF MARTYRDOM
By Candida Moss
Published by HarperOne, $25.99

In the first few pages of The Myth of Persecution, I had the feeling that I had fallen into an argument already at full boil. A bit like switching on the recent presidential campaign three months before the vote.

Who was this Candida Moss, and why was she so emphatic? I checked the liner copy: a professor at the University of Notre Dame, a cauldron of political discourse about Christian identity and political action.

This highly readable book presents a corrective to what we Christians thought we knew about our collective story, that the early Christians were widely persecuted for centuries. Furthermore, that this persecution helped spread the faith and proved the righteousness of believers. No. Moss, scholar of the early church and martyrs, contends persecution was rare and the duration brief.

Why is this important? “The myth of Christian martyrdom is not only inaccurate; it has contributed to great violence and continues to support a view of the world in which we are under attack from our fellow human beings,” she writes. Moss suggests that the rhetoric of martyrdom and persecution leads to a “theologizing of violence.”

“If there was never an Age of Martyrs, would Christians automatically see themselves engaged in a war with their critics?” Moss asks. “Would we be more compassionate? Would we be less self-righteous?”

She agrees that there were Christian martyrs in the first centuries, but not as part of an organized, centuries-long persecution — rather, from violating Roman laws. Moss asserts that “prior to 250 there was no legislation in place that required Christians to do anything that might lead them to die.”

The early Christian church, historian Eusebius particularly, chose to frame deaths of Christians as martyrdom, but many accounts are implausibly anachronistic and are forgeries. Moss writes that “once the pious chaff has been separated and the forged weeds cut” there remain only six “authentic accounts” of martyrs, among them Polycarp, Perpetua and Felicity, and Justin Martyr. As for organized persecution by the Roman Empire, she says that Christians died as the result of the imperial government only immediately following the burning of Rome in 64, briefly during the reign of Valerian 257-258 and during what is called the “Great Persecution” under Diocletian 303-305 -- with an renewed period under Maximus Daia between 311 and 313. That all the apostles died as martyrs cannot be verified.

“There’s no doubt that Christians thought they were persecuted. ... This story of Christian martyrdom is a myth that leads Christians to claim the rhetorical high ground, but a myth that makes collaboration and even compassion impossible,” Moss writes.

“Framed by the myth that we are persecuted, dialogue is not only impossible, it is undesirable,” she says. “We revel in the outrage and scandal that our words and opinions elicit. We don’t want to be understood by our opponents.”

In a 2012 homily, Bishop Daniel Jenky of Peoria, Ill., preached “one of the most controversial sermons in recent American memory,” Moss writes. At a Mass for the “Call to Catholic Men of Faith” rally, Jenky “challenged his audience to practice ‘heroic Catholicism’ ” in opposing the Obama administration and the U.S. Health and Human Services mandate for employers to provide contraceptive coverage.

He made this point within the context of multiple examples of the church persecuted and attacked over its 2,000-year history. He cited Nazis, Stalinists and other governments throughout history who “have tried to force Christians to huddle and hide only within the confines of their churches.” Moss reports that “what drew heated responses and fervent debate was the implicit comparison that Jenky made between President Obama, Adolf Hitler, and Joseph Stalin.” Rhetoric does not get any hotter than that.

Moss finds the language of religious persecution on the right and the left of the American political spectrum: Republican candidate Rick Santorum claimed to be a victim of “jihad.” Republican candidate Rick Perry promised to end Barack Obama’s “war on religion.” Liberal New York Times columnist Maureen Dowd’s characterized church hierarchy as participants in a “thuggish crusade” in their dealings with Sister of Mercy and Yale Divinity School Professor Emerita Margaret Farley.

“The use of this language of persecution is discursive napalm. It obliterates any sense of scale or moderation. This stymieing, dialogue-ending language is disastrous for public discourse, disastrous for politics, and results in a more deeply poisoned well for everyone,” Moss writes.

Moss asks us to take a look at our language, and to turn down the heat.

[Maureen Daly works in congregation-based organizing for political change and is a graduate of the Ecumenical Institute of Theology of St. Mary’s Seminary and University in Baltimore.]

Culture | The long shadow of the martyr myth

The threat of nuclear weapons has never really disappeared

Diaries highlight the daily ingenuity of the world's poor

Artist William Kelly believes we can 'change things for the better'

A reading from the Book of Glenn