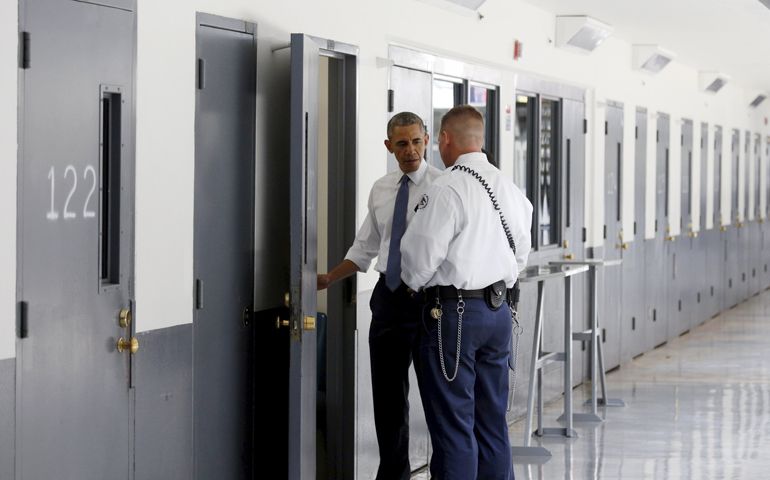 FROM THE WAR ON POVERTY TO THE WAR ON CRIME: THE MAKING OF MASS INCARCERATION IN AMERICA
By Elizabeth Hinton
Published by Harvard University Press, 464 pages, $29.95

The United States imprisons more citizens than any nation in the world, with more than 2 million behind bars and nearly another 5 million on probation or parole. We incarcerate roughly seven times more of our citizens than does the average European nation. We have just under 5 percent of the world's population but over 20 percent of its prisoners. How did a nation that so prizes liberty reach such a state?

The answer can be found in our very recent past, as our intense commitment to incarceration began only in the 1980s. And we must understand the role that perceptions of race have played to know the truth about the explosion of prison populations.

African-Americans are six times more likely to be jailed than whites, and more than twice as likely as Latin Americans. Historians and social scientists point to the war on drugs as the primary reason, and especially the racially uneven way that the justice system has prosecuted that war. They note the strong emphasis on law and order that conservative presidents such as Richard Nixon, Ronald Reagan and the two George Bushes promoted, and highlight the coincidence of their administrations and the steep rise in the prison population.

In From the War on Poverty to the War on Crime, Elizabeth Hinton challenges that interpretation by looking back into the 1960s, when imprisonment rates were very low in comparison to today, and finding the critical turning point in those liberal Democratic presidencies that Nixon, Reagan and the Bushes sought to repudiate.

Hinton argues that both John F. Kennedy and Lyndon Johnson introduced policies that made it possible for later presidents to swell our prison populations. Though Kennedy and Johnson did not put such inordinate numbers of Americans, and especially African-Americans, behind bars, they committed the original sin that allowed others to do so.

That sin was the insinuation of the federal government into the local crime-fighting enterprise. Most of the crimes for which young Americans find themselves in prison are local and state violations after all, and one might reasonably wonder how much national leaders have to do with these matters.

Hinton explains that Kennedy and Johnson promoted and signed into law policies intended to eliminate, or at least reduce, poverty. They targeted inner-city poverty in particular with programs that sought to get at poverty's roots as well as its branches. Unfortunately, they relied on flawed social science and its racist premises to inform those policies, and thereby incorporated the War on Crime into the War on Poverty.

Concerns about a perceived epidemic of juvenile delinquency led the Kennedy administration to identify many inner-city youths, particularly African-American boys, as either delinquent or pre-delinquent. To combat this epidemic, the administration established social service programs. So far so good. But as concerns about delinquency persisted, the federal government offered resources to local police forces to partner with the social service programs.

This greater perception of criminality then fueled a shift in resources from the social service agencies to the police departments -- still with the intent to pre-empt delinquent behavior. The urban rebellions in Los Angeles' Watts neighborhood, Newark, N.J., and Detroit in the mid-1960s led to demands for even more intense policing. The emphasis shifted further from social service programs to police surveillance and interdiction. By the time Johnson left office, the War on Crime was well underway.

Nixon won the 1968 presidential election in part because of a white backlash against urban crime, and he withdrew resources entirely from social service organizations and poured money into policing.

Conservative Republican presidents then pushed police forces to become more militarized and intrusive in cities, an opportunity that never would have existed had Kennedy and Johnson not incorporated police into the more benign (though no more enlightened) efforts to combat poverty. Neither Jimmy Carter nor Bill Clinton challenged this trend.

Hinton reminds us throughout that the real problem during the latter decades of the 20th century was a paucity of jobs for African-Americans because they faced unique discrimination in the hiring process. Any policy that ignored this fundamental structural reality doomed itself to inevitable failure. And federal policies did fail to confront this, as they favored instead the erroneous idea that African-Americans suffered from a cultural dysfunction that made young males unfit for work and even civic participation.

The remedy, using police to engage these boys with basketballs and billy clubs, depending on the situation, created an intense relationship that boys in upper-class towns and neighborhoods never had to negotiate. Combining the persistent police contact with racial prejudice produced the "carceral" state that we find ourselves in today.

The solution, Hinton leads us to conclude, is to reduce African-American unemployment either through generating jobs in the inner cities or by eliminating the racism that keeps employers from hiring blacks.

The first step in either strategy is to see the historical and contemporary landscape accurately -- a task for which Hinton proves an insightful guide.