Stepping inside art with Sister Wendy 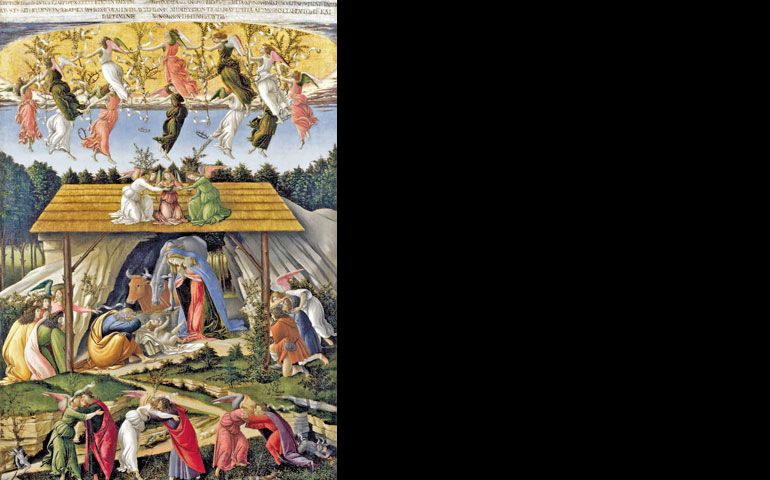 "The Mystic Nativity" (1500) by Sandro Botticelli (Courtesy of Orbis Books) 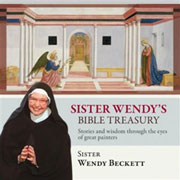 SISTER WENDY’S BIBLE TREASURY: STORIES AND WISDOM THROUGH THE EYES OF GREAT PAINTERS
By Sr. Wendy Beckett
Published by Orbis, $35

She’s a nun who wears a traditional habit and lives in a caravan (“trailer” in U.S. terminology) on the grounds of a Carmelite monastery in Norfolk, England. And she and the National Catholic Reporter have had a requited platonic love affair for years. She is, of course, Sr. Wendy Beckett.

Since the 1990s, the South African-born, Edinburgh, Scotland-reared (her father was a doctor) nun has also enchanted millions though her BBC series on art and her books on art.

First the facts, then the romance.

In 1946, and back in South Africa, the Sisters of Notre Dame de Namur sent Beckett to England to complete her novitiate. She gained a first class (with distinction) honors degree in English from Oxford’s St. Anne’s College, and a teaching certificate in Liverpool, and then returned to South Africa to teach -- English and Latin in a girls’ school. Next, she was a convent superior in Johannesburg, and a University of Witwatersrand lecturer.

Plagued by health problems, she left teaching, obtained papal permission to leave her congregation and became a consecrated virgin. Her Notre Dame de Namur sisters arranged for her to live in England -- Beckett’s choice -- under the protection of the Carmelite nuns, which she has done since 1970.

For a decade she translated medieval manuscripts then decided, in 1980, to pursue her favorite subject, art. More than three dozen art books and six television documentaries later, the 82-year-old Beckett has done it again with Sister Wendy’s Bible Treasury.

The romance, you ask? (Apart from reviewing her books.) Well, Michael Farrell, NCR’s editor at the time, was no slouch in judging -- and writing about -- art. To mark the millennium and provide a truly fresh image to the ages, he had the brilliant idea of “a search for a contemporary Jesus,” and Beckett agreed to be the final judge for the “Jesus 2000” contest. Paintings flowed in. The image, Beckett’s choice, can be seen on online at natcath.org/NCR_Online/archives2/1999d/122499/122499a.htm.
What is the secret of this nun in the tortoiseshell glasses, with the clear voice and the charming overbite? She doesn’t describe a painting. She steps into it. She walks around and gets to know the people inside the frame. Then, having visited the scene through some unique process of contemplative osmosis, she describes it so it lives. She’s particularly good with angels, as in this Christmas issue’s “The Mystic Nativity” by Sandro Botticelli. As you may read in the caption that accompanies the image (see below), Beckett may not be an angel, but at her best, she writes like one.

In her latest book, Sister Wendy’s Bible Treasury, Sr. Wendy Beckett writes of this painting: “The angels have not merely announced to the shepherds the miracle of God’s birth among us, but they have actually accompanied them to the stable, to make certain that they will not escape its full significance. Best of all, below Mary and the Child, we see heaven and earth embracing as angel clasps man, a union of heaven and earth that is embodied in Jesus himself. The love, this embrace of heaven, is enough to send the devils back to hell in miserable defeat.”

In wake of net neutrality ruling, Catholic leaders encourage cautious use of the Internet