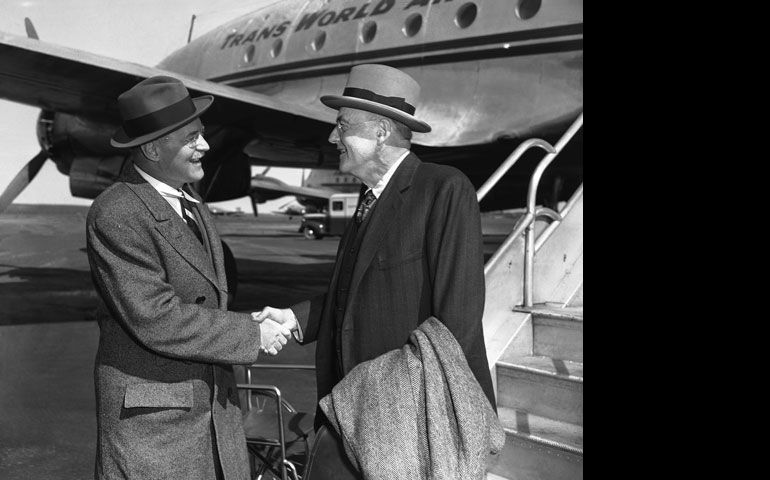 What have I learned from my years of travel in what was once called the "developing world"? Simply that people want to be treated with respect.

That's also true of nations, and global history since the end of World War II is really the story of countries once under the heel of colonial (or neocolonial) rule demanding respect. Witness China, India and Vietnam. The emergence of the first two, in particular, has changed our world, and made for a global environment that is radically different from, say, the late 1940s, when the United States was at the apex of its global power.

This is a simplification, of course -- neocolonial patterns still exist aplenty. But U.S. policymakers who failed to recognize this shift in the world have often not been judged well by history.

Two new books shed light, much of it not very flattering, on three seminal figures of the U.S. foreign policy establishment who dealt with these realities: Dwight D. Eisenhower's secretary of state, John Foster Dulles; his brother, Allen, who was for many years head of the Central Intelligence Agency; and George F. Kennan, one of our country's most influential diplomats.

The siblings depicted in Stephen Kinzer's The Brothers: John Foster Dulles, Allen Dulles, and Their Secret World War were nearly opposites. John Foster was a Wall Street attorney and Presbyterian elder whose icy rectitude and starchy moralism bothered no less a figure than theologian Reinhold Niebuhr. (John Foster was also, of course, the father of Avery Dulles, who became a respected Jesuit scholar and then, late in life, a Roman Catholic cardinal. Kinzer writes that John Foster was initially "apoplectic" at his son's conversion to Catholicism.)

From all accounts, spymaster Allen was a much warmer and gregarious figure than his brother. A cloak-and-dagger man, he relished his work for the Office of Strategic Services (the OSS, precursor to the CIA) and, somewhat carelessly, had numerous extramarital affairs.

Despite their differences, the Dulles brothers shared a fervent belief in the postwar Pax Americana. This is hardly a surprise for two men who, given their privileged backgrounds and early-career work for the corporate law firm Sullivan & Cromwell, embraced a Wall Street view of the world.

They also, Kinzer argues, "absorbed the belief that Providence had ordained a special global role for the United States. They were also immersed in missionary Calvinism, which holds that the world is an eternal battleground between saintly and demonic forces."

As the Dulles brothers worked in tandem as secretary of state and CIA director in the 1950s, they advocated, planned and implemented U.S.-sponsored interventions and covert actions against foes in, among other places, the Congo, Guatemala, Indonesia, Iran and Vietnam. (After his brother died in 1959, Allen was tripped up by -- and ultimately fired for -- the 1961 Bay of Pigs fiasco in Cuba.)

Each of these countries had unique histories and contexts. Yet the Dulles brothers treated each situation as cut from a singular red-hued, communist cloth (with the full approval of President Dwight Eisenhower, whose reputation as a shrewd and sophisticated practitioner of international statecraft takes a hit in Kinzer's book).

That was a shockingly "compulsive oversimplification of the world," as Kinzer calls it. And the results we know only too well: an unnecessary war in Vietnam; support for repressive regimes in Latin America and Asia; and, in the case of Iran, turmoil and a regional stalemate that continues into our own time.

Kinzer, a former New York Times foreign correspondent, recognizes that while "much that has gone wrong in the world" in the last five decades can be attributed to mistakes made by John Foster and Allen Dulles, it would be fairer to say that "Americans who seek to understand the roots of their country's trouble in the world should not look at Foster and Allen's portraits but in a mirror." Put another way, the belief in American exceptionalism is a hard drug to give up.

One American who did look squarely in both a mirror and the world with a cool gaze was Kennan (1904-2005), perhaps America's most renowned diplomat. He was best known as the intellectual father of the U.S. policy of containment toward the Soviet Union -- a very focused policy he did not intend as a global "meta-narrative." Though renowned for his time in the diplomatic corps, Kennan spent much of his long life outside the corps, as a respected sage, historian and Russian specialist.

Kennan was a master prose stylist. Yet, his posthumous diaries are in many ways a sad affair, and not only because this 700-plus-page book often feels weighted down by the pessimisms of a cranky (and sometimes self-pitying) man who yearns to be back in the action.

The Kennan Diaries doesn't offer much new in the way of revelations about his views of international relations. But Kennan's opinions of his own country are arresting: Kennan can sound spot-on on the overcommercialization of the postwar American landscape, and the need to protect the environment.

Alas, Kennan's musings are occasionally larded with observations that support eugenics; lament the demise of what he suggests is a superior WASP culture; and veer racist on the issue of apartheid in South Africa. At a few points, Kennan drops comments that are homophobic and anti-Semitic. These are, to say the least, opinions that do little credit to the reputation of a revered public figure.

Here is another example. Describing Nelson Mandela after his release from prison was announced in 1990, Kennan said: "I know of no pearls of wisdom that have fallen from his lips, or of any other evidences of great nobility or high statesmanlike qualities on his part."

It is true that when Kennan penned this, the world had not yet fully seen the Mandela who would become the beloved universal symbol of magnanimity. Still, Kennan's description of Mandela grates, and is remarkably ungenerous. And judged by history, it is utterly, utterly wrong.

Kennan didn't like John Foster Dulles. And though Kennan was, judged by his diaries, a more sensitive, and probably deeper, man than either of the Dulles brothers, Kennan was also a member of the WASP establishment that had terrible blind spots about the world. As such, he shared more with John Foster and Allen Dulles than perhaps he knew.

[Chris Herlinger is a frequent contributor to NCR and is senior writer for the humanitarian agency Church World Service.]

Trump to give speech on Islam in Saudi Arabia