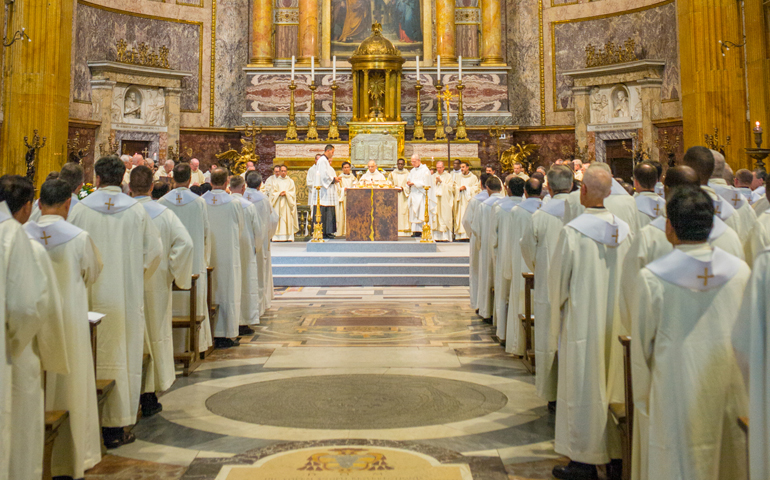 Jesuit delegates attend the opening Mass for the general congregation of the Society of Jesus at the Church of the Gesu in Rome Oct. 2, 2016. (CNS/Don Doll, SJ)

We can see them now. Two of the men most responsible for the birth of the nation, both former presidents — John Adams is 81 and Thomas Jefferson is 73 — exchanging letters in 1816, fiercely lamenting the return of the Society of Jesus from their 1773 worldwide (except for Russia) suppression.

"If ever any Congregation of Men could merit, eternal perdition on Earth and in Hell … It is this Company of Loiola," growls old Adams.

"It marks a retrograde step from light toward darkness," gripes Jefferson.

Though both men died in 1826, it would take two world wars and the Declaration on Religious Liberty at the Second Vatican Council to settle the issues that isolated the Society of Jesus from large parts of the American public.

How could this happen? Notre Dame historian John T. McGreevy answers with his challenging, fact-packed but ultimately satisfying American Jesuits and the World. Immigrants and Jesuits both came to the New World fleeing forms of oppression, but while probably half of the 60 million Europeans were Catholics who, in time, identified with American culture, the Jesuits, who numbered only 600 aged members in 1814, saw themselves as an international religious order oriented toward Rome. Though they grew to 7,000 members by the late 19th century, the Jesuits were expelled from Europe for "meddling in political intrigues." Over time, about a thousand built a new Catholic subculture of parishes, schools, universities and magazines to compete with "the American way of life."

Few studies have so clearly illustrated the latent Jesuit "anxieties about nationalism and democratic reforms associated with the enlightenment and French Revolution." The society drew back from modernity by emphasizing obedience and scholastic philosophy and by drafting and defending Pope Pius IX's 1864 Syllabus of Errors and the declaration of papal infallibility in 1870. When the first Jesuit theologate Woodstock College was founded in the remote hills outside Baltimore, European Jesuit exiles constituted the faculty to protect the scholastics from American "false ideas," like democracy and separation of church and state.

Meanwhile, in Ellsworth, Maine, in 1854, when Jesuit Fr. John Bapst, a Swiss immigrant pastor, petitioned the Ellsworth school committee to not require Catholic students to read the Protestant-translated King James Bible, a mob of 100 men stripped him naked and covered his body with tar and feathers. Nevertheless, Bapst persisted and, in time, got Catholics to establish their own school.

But just as Maine simmered, the debate shifted to the proposed Kansas-Nebraska Act, which would allow the citizens of the new states to decide whether to be slave-holding or free.

When more than 3,000 Protestant ministers signed a petition attacking this pro-slavery proposal, not a single Catholic priest joined them. Catholics might not have considered slavery as an absolute good, but Jesuit-edited La Civiltà Cattolica defended it as "not absolutely contrary to the law of nature."

In St. Louis, a series of lecturers demonstrated that anti-Catholicism thrived. Heinrich Boernstein, editor of Anzeiger des Westens, the oldest German-language newspaper west of the Mississippi, attacked the Jesuit "machinations" against the U.S. as the "last bulwark of religious freedom." Anti-Jesuit novels became best sellers.

When Fort Sumter was attacked as the Civil War began, the Jesuit general ordered Jesuits to take no stand. A handful, including Pierre-Jean De Smet, famous apostle to the Indians, supported the Union as the "lawful government," but more Jesuits sided with the Confederacy.

The leading lay Catholic intellectual Orestes Brownson worried that immigrant Catholics and Jesuits were not assimilating to American mores. Bapst refused to admit Brownson, after he had lost two sons dying for the Union, to a Jesuit house in Boston because Brownson supported immediate emancipation. Brownson wrote that Jesuits support the rebels not because they love slavery but "because they hate the republic."

The First Vatican Council's main motive for the declaration of infallibility, says McGreevy, was its desire to warn nationalist leaders that the church was "a powerful corporate body in their midst." And the Jesuits welcomed infallibility as a "check on liberal Catholics."

The Jesuit dedication to the miraculous or "mystical" cult of relics and personal revelations, and their emphasis on suffering as redemptive, further isolated the society from the American church. When Jesuit Fr. Burchard Villiger laid the cornerstone of the Gesu church in Philadelphia in 1879, he was bringing two worlds together. His Gesu was named for and modeled on the 16th-century baroque masterpiece, the original Jesuit headquarters in Rome. In the spirit of the day, he gathered over 400 relics, including three slivers of the true cross.

In 1851, he also founded St. Joseph's College, whose building became the prep school when the college replanted itself in a suburb. To Villiger, Jesuit education first created a Catholic gentleman and then a learned one, with the curriculum dominated by Latin and Greek.

World Wars I and II forced Jesuits everywhere, including in the U.S., to identify with nation states. A most successful adventure was the Jesuit general's decision to replace the Spanish Jesuits in the Philippines, who had failed to produce a "vibrant Catholicism" in their missions, with American Jesuits, who wore suits, not robes, and who taught the boys sports, like boxing. They also suffered imprisonment by the Japanese during World War II. Eventually it became clear that it was time for the Americans to go home and let the Filipino Jesuits take charge.

McGreevy concludes with Karl Rahner's post-Vatican II essay on the "emergence of a world Church in a fully official way." In the 19th century, the church considered itself superior and "exported a European religion as a commodity it did not really want to change." Rahner argued that "the victory of the vernacular in the liturgy" allowed individual churches to exist within their cultural spheres and let the churches be themselves.

Today, the American Jesuits teach the values of a classical education and send themselves and their students all over the globe in search of human rights, justice and peace. Adams and Jefferson can relax.