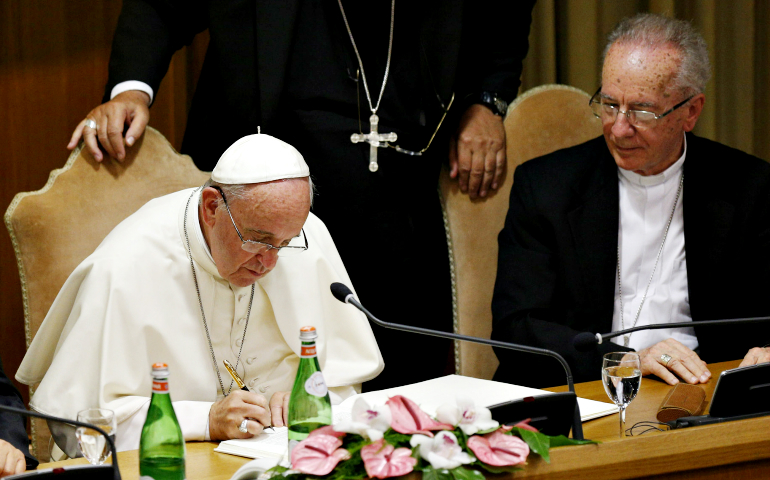 Pope Francis signs a declaration on climate change and human trafficking as Brazilian Cardinal Claudio Hummes, former prefect of the Congregation for the Clergy, looks on at the Vatican in July 2015. (CNS/Paul Haring)

"The Brazilian bishops, especially the pope's close friend Cardinal Claudio Hummes, have expressly requested Pope Francis to enable married priests in Brazil to return to their pastoral ministry," Boff said. "I have recently heard that the pope wants to fulfil this request — as an experimental, preliminary phase for the moment confined to Brazil."

With its 140 million Catholics, Brazil needs at least 100,000 priests but it only has 1,800, which is a "catastrophe," Boff said. "No wonder the faithful are going over to the evangelical churches or to the Pentecostals in droves, as they are filling the personnel vacuum. If the many thousands of priests who have married are once again allowed to practice their ministry, that would be a first step to improving the situation but at the same time also an impulse for the church to free itself of the fetters of celibacy."

Asked if he, as a former Franciscan, would reassume his priestly ministry should the pope decide to acquiesce to the Brazilian bishops' request, Boff replied, "I personally do not need such a decision. It would not change anything for me as I have continued to do what I have always done: I baptize, bury and when I come to a community that has no priest, I celebrate Mass with the faithful. Up to now, as far as I know, no bishop has ever objected, let alone forbidden me to do this. On the contrary, bishops often tell me to keep it up, as people have a right to the Eucharist."

The late Cardinal Paulo Evaristo Arns, under whom Boff studied theology, had always been very open on this issue, Boff said. Whenever Arns noticed married priests in the pews, he would invite them to come up to the altar and concelebrate with him, saying, "They are still priests and they will remain priests!"

As far as inner-church reforms were concerned, it is possible that the pope has further surprises up his sleeve, Boff said.

"Only recently, Cardinal Walter Kasper, who is close to the pope, said we could expect some big surprises shortly. So, who knows, maybe we can expect women deacons?"

"Francis is one of us. He has made liberation theology the common property of the church and he has, moreover, extended it," Boff said. "Whosoever speaks of the poor nowadays must also speak of our planet Earth, which is being plundered and desecrated. To hear the cry of the poor means to hear the cries of animals, trees and the whole of tortured creation and Pope Francis says we must hear the cry of both the poor and of creation. That is what is principally new in Laudato Si'."

According to Boff, Francis asked the theologian to send material for the pope to use in the environmental encyclical, "Laudato Si', on Care for Our Common Home." Francis called and thanked Boff the day before the encyclical was published in May 2015.

Boff admitted that Francis is experiencing fierce opposition from within his own ranks, "particularly from the USA."

U.S. Cardinal Raymond Burke, along with German Cardinal Joachim Meisner, has "once again" written to the pope, said Boff, who called Burke the "Donald Trump of the Catholic church." But unlike Trump, Boff said, Burke has now been "sidelined" in the Roman Curia.

Burke and Meisner were two of four cardinals who sent Francis a letter, made public in November, questioning the pope's teaching in his apostolic exhortation Amoris Laetitia. Some have interpreted the letter, along with some of Burke's public comments, as accusing Francis of heresy, though Burke has denied making such a charge.

"The way Burke has behaved is unusual, although not absolutely unprecedented in the course of church history," Boff said. "One can criticize the pope and argue with him. I have done so myself often enough. But for cardinals to publicly accuse the pope of disseminating erroneous theology, let alone heresy, is too much. That is an affront that a pope cannot tolerate."