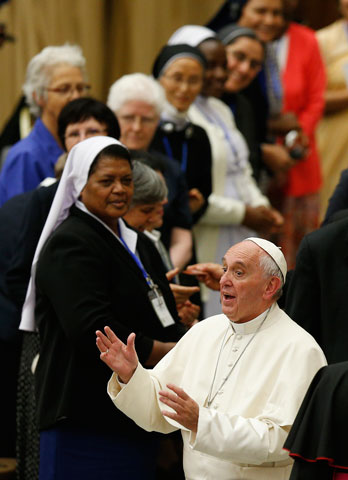 Pope Francis greets a nun during an audience with the heads of women's religious orders in Paul VI hall at the Vatican May 12. During a question-and-answer session, the pope said he was willing to establish a commission to study whether women could serve as deacons. (CNS/L'Osservatore Romano)

The latest salvo toward the stained glass ceiling came from Pope Francis on May 12, as he spoke in Paul VI Hall to the 900 members of the International Union of Superiors General following their triennial meeting in Rome. "Women deacons?" he was asked. Yes, he answered, I will ask the Congregation for the Doctrine of the Faith for information, and also for a commission to study the question.

With what will the commission be charged? There were women ordained as deacons in the early church. That is a historical fact. What they did, where they did it, and how they became deacons are all well-studied. The facts of history cannot be changed.

So the real question the papal commission will study is whether women can be sacramentally ordained to the diaconate today. That is, can women rejoin the ranks of what are now called "permanent deacons"?

The major objections are twofold: Women deacons of history only ministered to other women and did not do what men deacons do; and women cannot receive the sacrament of orders because the female gender cannot image Christ.

The historical argument is not dispositive in either direction. Because the diaconate is a creation of the church (Acts 6:1-6), it is a malleable ministry of service. The theological objection vitiates the teaching that all are made in the image and likeness of God. It is not the human male Jesus, but the risen Lord who is sign and symbol of every sacrament.

Even though some bishops spoke about restoring women to the diaconate at the time, the Second Vatican Council only recommended rejuvenation of the diaconate as a permanent vocation for men.

In 1967, Pope Paul VI's apostolic letter Sacrum Diaconatus Ordinem, "General Norms for Restoring the Permanent Diaconate in the Latin Church," described the deacon's tasks and duties. What caught the church's imagination at the time was that married men would be ordained as "permanent deacons." In the West, up to the 12th century, women served permanently as deacons.

In 1972, Paul VI's Ministeria Quaedam suppressed the minor orders of porter, exorcist, lector and acolyte. Paul VI suppressed, but affirmed the historical fact of, the major order of subdeacon, an important point because some early documents list the "deaconess" between subdeacon and deacon, therefore among the major orders. Linguistic distinctions cause some to argue that "deaconess" signifies a distinct order, but where no "deaconesses" but only deacons are mentioned, women deacons are more likely included. Literary and epigraphical evidence support this fact.

Also in 1972, Paul VI's apostolic letter Ad Pascendum further delineated the diaconate, specifying it an "intermediate order" between "the higher ranks of the Church's hierarchy and the rest of the people of God ... and as a sign or sacrament of Christ the Lord himself, who 'came not to be served but to serve.' "

What the deacon does

Today, the members of this "intermediate order" of deacons serve the church through the word, the liturgy and charity. Deacons are catechists and preachers; they proclaim the Gospel and lead non-eucharistic liturgies. Deacons are the face of the church's charity: They minister to the sick and the poor.

Most of what the deacon does, except for roles that require the clerical state, is no longer restricted to men. It is fairly well understood by now that following the close of Vatican II, Paul VI asked either the entire International Theological Commission or one or more of its prominent members about women deacons. Eastern liturgy expert Cipriano Vagaggini published a dense scholarly article (see NCRonline.org/node/79671 or NCR, June 20-July 3, 2014 print issue) demonstrating that women deacons in the Greek and Byzantine traditions were truly ordained to a ministerial diaconate and had sacred duties.

Philippe Delhaye, at the time general secretary of the International Theological Commission, wrote an even stronger article supporting the sacramental ordination of women as deacons. But nothing came directly from the commission.

During the 1970s, theological debate about women deacons continued. The major contenders were Roger Gryson (1938-), now emeritus professor of patristics at the Catholic University of Louvain, and Aimé-Georges Martimort (1911-2000), then a professor of liturgical history at Institut Catholique de Toulouse. Using identical sources for their research, they came to opposing conclusions: Gryson argued that women could be ordained as deacons; Martimort argued that they could not. However, Martimort said the case was not completely closed.

Meanwhile, academic and public debate about women as priests took center stage. In 1976, the Congregation for the Doctrine of the Faith published its Inter Insigniores, "Declaration," on the question of admission of women to the ministerial priesthood. While a "declaration" is a simple statement of law, the congregation argued two reasons to rule out women priests: The church did not have the authority to ordain women as priests because Jesus chose only male apostles (the argument from authority); and women cannot image Christ (the iconic argument).

Public calls for women priests had drowned the question of restoring women to the ordained diaconate, but by 1992, the International Theological Commission created a subcommittee of eight men to study the issue. Many reports state that in 1997, the commission completed its work and produced a positive 17- or 18-page document, which was printed and numbered, but the doctrinal congregation's prefect at the time, Cardinal Joseph Ratzinger, refused to sign it, but sent the question back to a reconfigured subcommittee headed by one of his former graduate students.

As the 1990s drew to a close, some curial officials noticed that some bishops in German-speaking countries were preparing women for diaconal ordination. In 2001, a "notification" signed by the now-retired prefects of the Congregations for the Doctrine of the Faith, of Clergy, and of Divine Worship and the Discipline of the Sacraments essentially said that bishops should not prepare women for diaconal ordination because these prefects did not foresee women being ordained.

Coincidentally, final touches were being put on the International Theological Commission's reworked study document, which no longer focused solely on women deacons. In 2002, "The Diaconate: Evolution and Perspectives" appeared with a preliminary note that the original subcommittee could not "produce a text."

The 2002 study document -- quadruple the size of the first text -- concluded:

Originally published in French and within the recent past also posted in English, German, Hungarian, Italian, Polish, Portuguese, Russian and Spanish in the Vatican's Web pages, the study has some curious lapses in historical documentation. It also includes multiple uncited passages and paraphrases from an earlier book by Gerhard Müller, at the time a priest and university professor, now a cardinal and prefect of the doctrinal congregation.

Even so, the most recent document coming from the Curia says the question of women in the diaconate is up to "the ministry of discernment the Lord has left his Church to decide."

The diaconate and priesthood -- already clearly separated in teaching -- were further distinguished in 2009, when Pope Benedict XVI modified canon law to read: "Those who are constituted in the order of the episcopate or the presbyterate receive the mission and capacity to act in the person of Christ the Head, whereas deacons are empowered to serve the People of God in the ministries of the liturgy, the word and charity."

These ancient ministries carried forth by a believing church can again easily include women.

[Phyllis Zagano of Hofstra University is the author of many books and articles on women deacons. Her most recent book, Women Deacons?: Essays with Answers (Liturgical Press, 2016), collects 12 scholarly essays written between the 1970s and the present.]

A version of this story appeared in the June 3-15, 2016 print issue under the headline: Can women rejoin the ranks?.