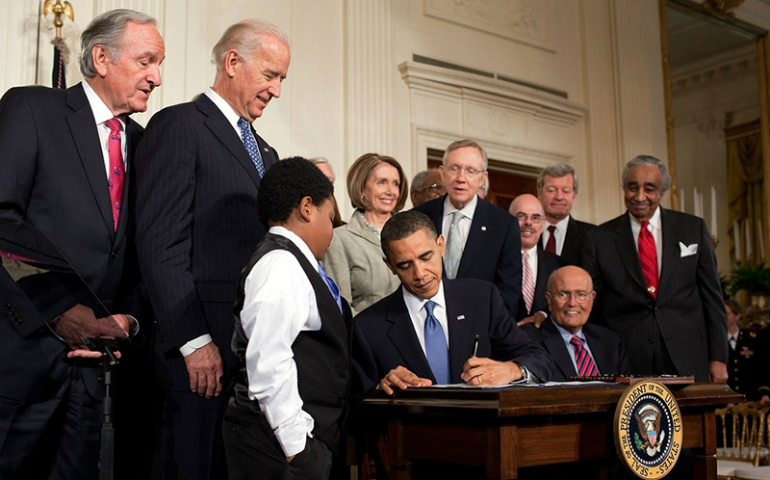 President Obama signs the Patient Protection and Affordable Care Act at the White House on March 23, 2010. (The White House/Pete Souza)

The U.S. Catholic hierarchy was one of the staunchest foes of President Obama’s signature health care law, nearly derailing its passage in 2010 over concerns about abortion funding and exacting a political toll that helped doom abortion-opposing Democrats who backed Obamacare while boosting Republican efforts to take control of Congress.

But faced with the prospect of the GOP following through on pledges to repeal health care reform, the U.S. Conference of Catholic Bishops seems to be changing its tune.

On Jan. 18 the USCCB released a letter warning Congress not to overturn the law without providing an immediate replacement to provide continuing coverage for the millions who have been insured under the Affordable Care Act.

"We recognize that the law has brought about important gains in coverage, and those gains should be protected," Bishop Frank Dewane of Venice, Fla., chairman of the USCCB’s Committee on Domestic Justice and Human Development, wrote to House and Senate members.

He said the bishops will examine proposals to amend or replace Obamacare but said that "for now that a repeal of key provisions of the Affordable Care Act ought not be undertaken without the concurrent passage of a replacement plan that ensures access to adequate health care for the millions of people who now rely upon it for their wellbeing."

For those on the lower rungs of the economic ladder, he said, a repeal "would prove particularly devastating."

The letter comes in the midst of an increasingly fierce debate in the Republican-controlled Congress over how and even whether to repeal Obamacare — a hallmark GOP talking point over the last six years — and just two days before Donald Trump, who also vowed to repeal the health care law as one of his first acts, takes the oath as president.

The law’s critics have been stymied by the fact that the law, like Obama, is proving to be more popular than ever. About 20 million Americans rely on it and premiums would skyrocket for millions of others if the law is repealed.

In addition, while pledging to repeal the law, Trump and Republicans have not agreed on anything to replace it, prompting questions on whether it will be repealed.

The USCCB’s letter also came the same day that the Senate began hearings on Trump’s nomination of Georgia Rep. Tom Price (R-Ga.), one of Obamacare’s sharpest critics, to head the Department of Health and Human Services, which would oversee health care policy.

With the letter the hierarchy joins a number of progressive religious leaders and organizations that have urged Republicans to preserve or improve the health care law, not repeal it or replace it with something less effective.

The addition of the USCCB to that camp is striking.

While the Catholic Church teaches that universal, affordable health care is a human right — a teaching cited by Dewane in his letter — the American bishops issued dire warnings that Obamacare would lead to an unprecedented expansion of taxpayer funding of abortion.

Catholic Democrats in Congress at the time introduced provisions to prevent that from happening — over the objections of Republicans — but the USCCB ultimately sided with the GOP in deciding it was better to try to kill the entire bill.

The law passed and the abortion funding fears did not come to pass, but as a result of the backlash abortion-opposing Democrats were swept out of office months later, depriving the USCCB of a key bloc of congressional support for their agenda.

The hierarchy then focused on the administration’s subsequent contraception mandate for employers, which was authorized under the provisions of the Affordable Care Act and angered the bishops as an infringement of religious freedom. That issue became the focus of much of the bishops’ lobbying in recent years.

Trump could undo that mandate and provide other funding and conscience protections, as the USCCB would like, without repealing the health care law.

Last week at a conference in Washington two prominent churchmen and other Catholic leaders seemed to signal the church’s pivot toward opposition to outright repeal.

At the conference at Catholic University of America, just north of Capitol Hill, Boston Cardinal Sean O’Malley called affordable health care "foundational" and warned government leaders that they had a "moral obligation" not to deprive people of health insurance.