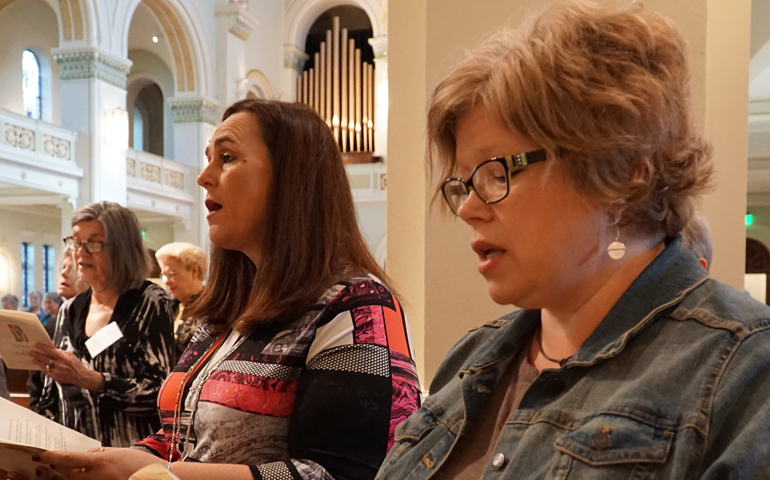 Jonna O'Bryan, foreground, and Carrie Williamson of St. Patrick Church in Louisville, Ky., sing Oct. 9 during the closing liturgy of the "Women of the Church" conference in Ferdinand, Ind. (CNS/Marnie McAllister, The Record)

Politicians seeking office on Nov. 8 who speak of family values would do well to understand all that term entails, says a letter from 44 lay and religious Catholic women, including the leaders of several major U.S. Catholic organizations.

"'Family values' isn't simply a buzzword on the campaign trail," the letter stated, adding that "As Catholic women and mothers, we follow the presidential election not as Democrats or Republicans, but as Catholics committed to our faith, our families and the common good."

Broadly, "family values," the women said, means honoring the dignity of families. Specifically, they singled out the need for policies that reject a consumer culture viewing sex as a commodity; provide access to paid parental leave for both parents and affordable child care; produce jobs paying a living wage; and develop "a humane immigration system that keeps families together."

Too often, the language of the current presidential campaign between Democratic candidate Hillary Clinton and Republican nominee Donald Trump has been "characterized by the toxic politics of fear," they said, particularly in discussions of Muslims, refugees and immigrants — language that "offends the Gospel, betrays our nation's highest ideals and diminishes human dignity."

The leadership teams of several congregations of women religious also lent their names to the letter.

A copy of the letter, organized by Faith in Public Life, is set to be published in upcoming editions of three Catholic news publications: National Catholic Reporter, Our Sunday Visitor and America magazine.

Rather than a period of fear, elections, the women stated, should serve as an occasion for a national examination of conscience.

"The Hebrew prophets remind us that nations will be judged by how the least among us are treated," they said. "Jesus taught us that our neighbor is not defined by language, religion or geography but our common humanity. All children, born and unborn, are created in the image of God, whether they are from Aleppo, Syria or Birmingham, Alabama."

"Our faith calls us to affirm the sacred dignity of all life. This is why our Church defends life in the womb, the undocumented immigrant and the inmate on death row," the letter read.

Amid the verbal barbs exchanged between Trump and Clinton, the candidates have at times addressed several of the issues outlined in the Catholic women's letter.

Paid parental leave is one of the few issues where the candidates share at least some ideas.

Clinton has pledged to guarantee parents of newborns up to 12 weeks of paid family and medical leave, while Trump's plan would provide six weeks of paid leave to new mothers.

Clinton would also offer a maximum of 12 weeks to people caring for an ill family member or themselves recovering from a serious injury or illness. For those on leave, at least two-thirds of current wages would be guaranteed. The Democratic nominee said her program would not impose additional costs on businesses, and would be covered by increasing taxes on the wealthiest.

Trump focused much of his plan on changes to the tax code, beginning with a rewrite that would allow working parents making under $250,000 individually to deduct from their income taxes expenses related to a max of four children or elderly dependents, and to enroll in tax-free dependent care savings accounts. He would also establish an expanded earned income tax credit, through a child care rebate, for low-income families and provide a matching $500 contribution to their savings accounts.

As for a living wage, Clinton supports raising the federal minimum wage to $12 per hour, and local efforts in cities and states to raise it further. Trump has been less clear on his position, flipping back and forth on if and from where a raise should come. His campaign told The Washington Post in August he supports raising the federal minimum wage to $10 an hour, "but believes states should set the minimum wage as appropriate for their state."

On other issues, including immigration and abortion, the divisions are clearer, with both discussed during the final debate.

Trump has pledged to build "an impenetrable physical wall" on the U.S. southern border, to end sanctuary cities and to make anyone in the country illegally subject to deportation — a population currently estimated at roughly 11 million people — with initial priority given to criminals, security threats and those overstaying visas.

While he has not explicitly said he would break up families lacking proper documentation, in a speech on immigration in Phoenix in late August, Trump said the only core issue in the immigration debate is "the well-being of the American people. Nothing even comes a close second."

Hillary Clinton, for instance, talks constantly about her fears that families will be separated. But she's not talking about the American families who have been permanently separated from their loved ones because of a preventable homicide, because of a preventable death, because of murder. No, she's only talking about families who came here in violation of the law. We will treat everyone living or residing in our country with great dignity, so important. We will be fair, just and compassionate to all. But our greatest compassion must be for our American citizens.

Clinton has said comprehensive immigration reform, with a pathway to citizenship, would be part of her first 100 days in office. Her plans prioritize measures that keep families together, including an end to family detention centers, while enforcing immigration laws "humanely," with emphasis on deporting suspected violent persons.

On abortion, Clinton in the final debate reiterated her support of Roe v. Wade and that she would defend against attempts to defund Planned Parenthood. She said abortions occurring toward the end of a pregnancy "are often the most heartbreaking, painful decisions for families to make," and ones where she believes the government should not be involved.

This is one of the worst possible choices that any woman and her family has to make. … The government has no business in the decisions that women make with their families in accordance with their faith, with medical advice. And I will stand up for that right.

Trump, who says he is pro-life, said during the debate that should the Supreme Court overturn Roe under his presidency, the case would return to the states "and the states will then make a determination." Elsewhere, he has stated his opposition to abortion except for in cases of rape, incest or where the mother's life is at risk, and his intention to defend religious groups opposing the inclusion of contraceptive services in their employee health plans.