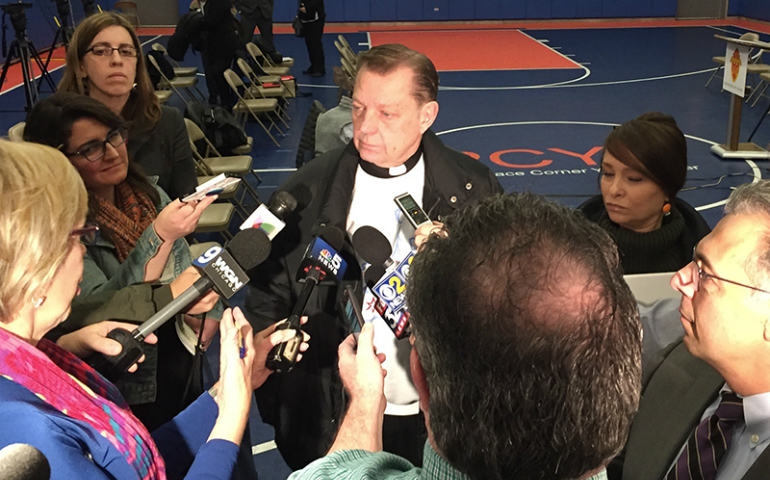 The Rev. Michael Pfleger speaks to reporters following the announcement of an anti-violence initiative in Chicago, Illinois, on April 4. (RNS/Tom Gallagher)

With the blessing of Pope Francis, Cardinal Blase Cupich on April 4 unveiled an anti-violence initiative for this beleaguered city that will be underscored by a Good Friday procession using the traditional stations of Jesus’ way to the cross to commemorate those who have been murdered.

Cupich said he was inviting civic, education and religious leaders and “all people of good will” to take part in the April 14 “Peace Walk” through the heart of the gun-ridden Englewood neighborhood.

He said the pope had promised to include Chicago in his prayers when he leads the Way of Cross procession that day at the Coliseum in Rome.

“The causes of the violence we are seeing in our city are complex and deep seated, but I have a strong belief, based on the good will and the many dedicated efforts of our civic and religious leaders, that these causes can be addressed and the suffering can end if we all work together,” Cupich said at a press conference at the Peace Corner Youth Center.

The organization is a church-sponsored community center in the city’s Austin neighborhood that provides a safe haven from gang violence and drug activity and other services.

“Bolstered by the encouragement of the Holy Father, we are dedicated to creating a framework for peace building in our city,” said Cupich, who was personally chosen by Francis in 2014 to lead the Archdiocese of Chicago, one of the largest and most influential in the U.S. church.

Cupich, who is in the vanguard of a new wave of more pastoral-minded bishops in the mold of Francis, has from the beginning used his pulpit to bring attention to the gang and drug violence that has shattered many city neighborhoods.

Chicago recorded 783 homicides last year, the most since 1996, according to data collected by the Chicago Tribune, and this year began with a spate of shootings that was even higher than the same period in 2016.

President Donald Trump has frequently held up Chicago’s murders as emblematic of “out of control” violence in the nation’s cities and has blasted city officials has soft on crime. At one point suggested he might send in federal authorities to take charge.

Flanked by priests and officials from Catholic social service organizations, the cardinal outlined plans for a major new philanthropy to promote programs that have proven effective in combatting violence and lifting people out of poverty.

The fund will seek money from a range of donors and the archdiocese plans to partner with other social service dedicated to “breaking the violence-causing cycle of despair, racism and poverty in the city.”

One of the programs the archdiocese cited for expansion is called Strong Futures that operates out of the St. Sabina parish on the city’s South Side. The largely African-American parish has been led since 1981 by Fr. Michael Pfleger, who has been one of the most outspoken and controversial activists against violence and racism in the city.

Pfleger has often been a thorn in the side of the church here, as well, and was briefly suspended in 2011 by the late Chicago Cardinal Francis George for his various statements and for defying his suggestion that he leave Saint Sabina for another post.

Pfleger was even the subject of a lengthy profile in the New Yorker magazine a year ago that described him as “a showman of the first order.”

But Pfleger was part of the news conference on Tuesday and it’s clear that Cupich intends to incorporate Pfleger and his reputation into the anti-violence campaign.

Cupich has also linked the pope’s approach and initiatives to what he is doing in Chicago. On Tuesday released a letter that the pontiff addressed to the people of Chicago assuring them of his prayers and support amid the difficulties and citing the example of the Rev. Dr. Martin Luther King, Jr. and praising his strategy of nonviolence.

“Sadly, as you have told me, people of different ethnic, economic, and social backgrounds suffer discrimination, indifference, injustice, and violence today,” the pope wrote in the letter to Cupich. “We must reject this exclusion and isolation, and not think of any group as ‘others’ but rather as our own brothers and sisters.”

“Walking the path of peace is not always easy, but it is the only authentic response to violence,” he wrote.

A version of this story appeared in the April 21-May 4, 2017 print issue under the headline: Making peace in Chicago.