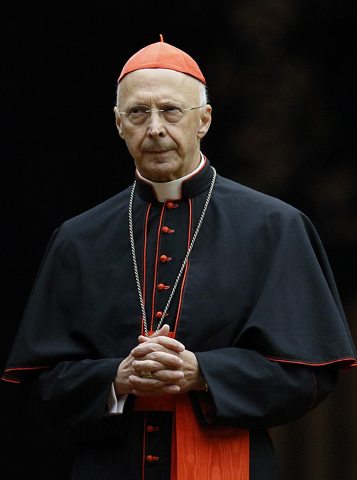 With the Italian Senate set to vote on a bill recognizing civil unions, the president of the Italian bishops' conference said the country's bishops are united in reaffirming the rights of children to be raised by both a mother and a father.

Opening a meeting of the bishops' permanent council Jan. 25, Cardinal Angelo Bagnasco of Genoa said the family "does not exist for society or the state, but society and the state exist for the family."

"We hope the collective conscious will never lack the precise and unique identity of this institution, which 'possesses inviolable rights and finds its legitimization in human nature and not in being recognized by the state,'" the cardinal said, quoting the Compendium of the Social Doctrine of the Church.

The Italian Senate was set to vote Jan. 28 on legislation that would grant legal recognition to heterosexual or homosexual unions while not defining the unions as marriage. Opponents of the bill argue the bill violates the country's constitution, particularly with regard to a proposed clause that would allow for a nonbiological parent in a homosexual union to adopt a child conceived by his or her partner, either through artificial insemination or with a surrogate mother.

Italians are divided on the legislation, prompting rallies for and against the bill. Thousands of same-sex marriage supporters marched in various cities across Italy in favor of the legislation Jan. 22. With the support of the Italian bishops' conference, supporters of traditional family life scheduled a "Family Day" rally in Rome's Circus Maximus for Jan. 30. A "Family Day" rally last year to protest same-sex marriage legislation drew as many as 1 million people.

In his remarks to the bishops' permanent council, Bagnasco stressed that Italy's constitution must be "appreciated and cherished" and that in the current debate, "there can be no confusion between the family willed by God and every other type of union."

Children, he said, are not a right "because they are not things to be produced; they have a right to every precedence and respect, security and stability."

"Children have a right to be raised by a mother and a father. The family is an anthropological fact, not ideological," he said.

Bagnasco said the Italian bishops are united in reaffirming the "beauty, centrality and uniqueness" of the family. At the same time, the cardinal said, those who live in an objective state of error by choice or circumstance "continue to be the object of the merciful love of Christ and therefore of the church herself."