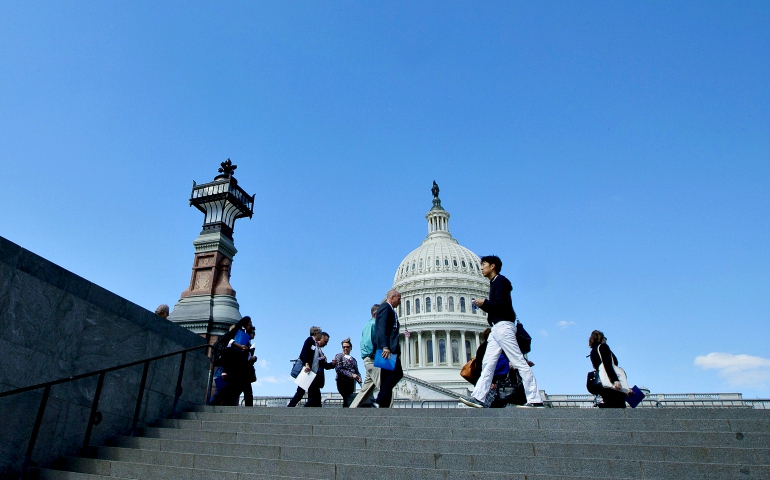 People walk near the U.S. Capitol in Washington May 3. (CNS/Tyler Orsburn)

On a day when some of its members were engaging in a monthly fast, in solidarity with those who go hungry when their federal food assistance runs out three weeks into each month, members of the ecumenical Circle of Protection gathered Wednesday morning, June 21, at the National Press Club in Washington to issue a formal statement condemning President Donald Trump's proposed fiscal year 2018 budget.

Later, they met with members of Congress on Capitol Hill to push their agenda, particularly as it concerns the health care bill being finalized in the Senate.

NCR has reported previously on the president's proposed budget, which would include dramatic cuts to Medicaid (as much as $800 billion), the Supplemental Nutrition Assistance Program (SNAP or food stamps), Temporary Assistance to Needy Families (welfare), and foreign aid, among other things.

On June 21, The Washington Post reported that the Senate health care legislation, which has largely been negotiated in secret, would shut down the expansion of Medicaid and result in deep, long-term cuts to the program, which provides insurance for low-income Americans.

The Circle of Protection's statement about the budget, which it calls a "moral document," read, in part, "We recognize the need to address our national debt and believe that Congress should approve a budget that weighs the importance of providing for critical needs and that responsibly manages the country's fiscal issues; but the most vulnerable should not carry the burden of solving this challenge."

The Circle of Protection counts among its members more than 65 national leaders of Christian groups and churches. Ten spoke at the press conference, including the Rev. David Beckmann, president of Bread for the World; Jim Wallis, president and founder of Sojourners; and Venice, Florida, Bishop Frank Dewane, who chairs the Committee on Domestic Justice and Human Development at the U.S. Conference of Catholic Bishops.

This was not the group's first round of Hill visits, which this time largely zeroed in on the Senate's pending health care bill. The Circle of Protection is focusing many of its current efforts on senators from Alaska, Arizona, Maine, Nevada, Ohio and South Carolina to try to secure their votes against the legislation, which would replace the Affordable Care Act.

Calling the Circle's position a "Christian pushback" to budget cuts that unfairly impact the poor, Wallis spoke of his vision of Christian senators and representatives "joining together" to pass more just legislation.

"If we could lift up that this is not a political issue," he said, but rather a moral one. "Most people don't know that 60 percent of budget cuts come from the poor. If they did, they would raise it from the pulpits."

Dewane, in his remarks, described care for the poor as "a mandate that should be embedded in the DNA of every Christian" and said the Catholic Church stands ready to work with those who will help to advance a budget "that protects the poor and vulnerable and advances the common good."

Denouncing the impact of the proposed budget, which is unlikely to pass as submitted, as "mean, callous, cruel and devastating," the Rev. Leslie Copeland Tune, director of the Ecumenical Poverty Initiative, asked what the budget says about America and its values. "It may say that we are spiritually bankrupt and headed toward moral ruin," she answered.

During a Q&A session at the end of the press conference, Beckmann fielded a question about how the group would advise lawmakers on necessary budget cuts.

"Our main recommendation is don't cut programs for poor people. Period. Not to pay for tax cuts and increased military spending. That's wrong," he said dryly, inducing some laughter from the room and the other speakers arranged behind him. "Did I get it right?" he joked as he turned around to face them.

The Circle of Protection was founded in 2011. Its statement of principles commits the group "to resist budget cuts that undermine the lives, dignity, and rights of poor and vulnerable people."

The fast that some of its members are engaged in will continue on the 21st of every month until December 2018, when the 115th Congress concludes.

At the end of the press conference, some of the group's members prepared for the short trip to Capitol Hill, where visits were planned to the offices of Sen. Joe Manchin (D-West Virginia), Sen. Rob Portman (R-Ohio), and Rep. Lloyd Smucker (R-Pennsylvania).

When asked prior to leaving for the Capitol if he was hopeful about the outcome of the Senate visits — his first in his new position at the bishops' conference — Dewane answered rhetorically, "We are a people of hope, are we not?"